Are Metal Bodies Worth 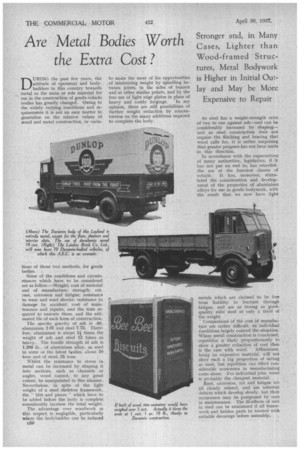 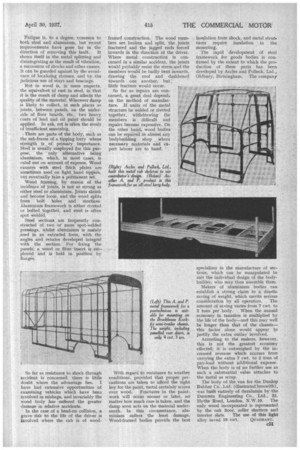 Page 108, 30th April 1937 — Are Metal Bodies Worth
Close
Noticed an error?
If you've noticed an error in this article please click here to report it so we can fix it.

Stronger and, in Many Cases, Lighter than Wood-framed Structures, Metal Bodywork is Higher in Initial Ourlay and May be More Expensive to Repair

DURING the past few years, the attitude of operators and bodybuilders in this country towards metal as the main or sole material for use in the construction of goods-vehicle bodies has greatly changed. Owing to the widely varying conditions and requirements it is not an easy matter to generalize on the relative values of wood and metal construction, or varia

dons of those two methods, for goods bodies.

• Some of the conditions and circumstances which have to be considered are as follow:—Weight; cost of material and of manufacture; strength; rot, rust, corrosion and fatigue; resistance to wear and road shocks; resistance to damage by accident; cost of maintenance and repairs, and the time required to execute them, and the estimated life of each form of construction.

Whilst the resistance to stress in metal can be increased by shaping it into sections, such as channels or angles, wood cannot, to any great extent, be manipulated in this Manner. Nevertheless, in spite of the light weight of a steel skeleton framework, the " bits and pieces" which have to be added before the body is complete considerably increase the total weight.

The advantage over woodwork in this respect is negligible, particularly where the bodybuilder can be induced c50 to make the most of his opportunities of minimizing weight by spindling between joints, in the sides of bearers and at other similar points, and by the free use of light edge plates in place of heavy and costly forgings. In my opinion, there are still possibilities of further weight reduction by concentration on the many additions required to complete the body. As steel has a weight-strength ratio of two to one against ash—and can be considerably increased by shaping— and as steel construction does not require the flitching and bracing that wood calls for, it is rather surprising that greater progress has not been made in this direction.

In accordance with the expectations of many authorities, legislation, if it has not put an end to, has retarded, the use of the heaviest classes of vehicle. It has, moreover, stimulated the consideration and development of the properties of aluminium alloys for use in goods bodywork, with the result that we now have light metals which are claimed to be free from liability to fracture through fatigue, and are as strong as goodquality mild steel at only a third of the weight. Comparisons of the cost Of manufacture are rather difficult, as individual 4Onditions largely control the situation. Where metal construction is concerned, repetition is likely proportionately to show a greater reduction of cost than is the case with wood. Alflminium, being an expensive material, Will not show such a big proportion of Saving as steel, but repetition can effect considerable economies in manufacturing costs alone. For individual jobs, wood is probably the cheapest material. Rust, corrosion, rot and fatigue are all closely related, and are inherent defects which develop slowly, but their occurrence may be postponed by care in maintenance. The ill-effects of rust in steel can be minimized if all framework and hidden parts be treated with suitable dressings before assembly. Fatigue is, to a degree, 'common to both steel and aluminium, but recent improvements have gone far in the

direction of removing this fault. It shows itself in the metal splitting and disintegrating as the result of vibration, a succession of shocks and other causes. it can be guarded against by the avoidance of localizing stresses, and by the judicious use of stays and bracings.

Rot in NVOOd is, in some respects, the equivalent of rust in steel, in that it is the result of damp and affects the quality of the material. Wherever damp is likely to collect, in such places as joints, between panels, on the underside of floor boards, etc„ two heavy coats of lead and oil paint should be applied, In ash, rot is often the result of insufficient seasoning.

There are parts of the body, such as the sub-frame of a tipping lorry where strength is of primary importance. Steel is usually employed for this purpose, the only alternative being aluminium, which, in most cases, is ruled out on account of expense. Wood runners with steel flitch plates are sometimes used on light hand tippers, but eventually take a permanent set.

Wood framing, by reason of the incidence of joints, is not so strong as either steel or aluminium. Joints shrink and become loose, and the wood splits from bolt holes and mortices. Aluminium framework is either riveted or bolted together, and steel is often spot welded.

Steel sections are frequently constructed of two or more spot-welded pressings, whilst aluminium is mainly used in an extruded form, with the angles and rebates developed integral with the section. For fixing the panels, a wood or fibre insert is ployed and is held in position by flanges. , So far as resistance to shock through accident is concerned, there is little doubt where the advantage lies. I have had extensive opportunities of examining vehicles which have been involved in mishaps, and invariably the wood body has suffered the greater damage in relative accidents.

In the case of a head-on collision, a grave risk to the life of the driver is involved where the cab is of wood

framed construction. The wood members are broken and split, the joints fractured and the jagged ends forced inwards in the direction of the driver. Where metal construction is concerned in a similar accident, the joints would probably resist the stress and the members would be badly bent inwards, drawing the roof and dashboard towards one another, but; little fracture would occur.

So far as repairs are concerned, a great deal depend'. on the method of manufacture. If units of the metal structure be welded or riveted together, withdrawing the members is difficult and repairs become expensive. On the other hand, wood bodies can be repaired in almost any bodybuilding shop where necessary materials and expert labour are to hand.

With regard to resistance to weather conditions, provided that proper precautions are taken to afford the right key for the paint, metal certainly scores over wood. Fractures in the paintwork will occur sooner or later, no matter how much care is taken, and the damp soon acts on the material underneath. In this circumstance, aluminium suffers the least damage. Wood-framed bodies provide the best insulation from shock, and metal struetures require insulation ' in the mounting.

The rapid development of steel framework for goods bodies is confirmed by the extent to which the production of these parts has been developed by Accles and Pollock, Ltd., Oldbury, Birmingham. The company specializes in the manufacture of sections, which can be manipulated to suit the individual design of the bodybuilder, who may then assemble them.

Makers of aluminium bodies can establish a strong claim to a drastic saving of weight, which merits serious consideration by all operators. The amount of saving varies from 7 cwt. to 2 tons per body. When the annual economy in taxation is multiplied by the life of the body—and this may well be longer than that of the chassis-this factor alone would appear to justify the extra outlay involved.

According to the makers, however, this is not the greatest economy effected; it is outweighed by the increased revenue which accrues from carrying the extra 7 cwt. to 2 tons of pay-load without additional expense. When the body is of no further use as such a substantial value attaches to the metal as scrap.

The body of the van for the Dunlop Rubber Co., Ltd. (illustrated herewith) , was built entirely of duralumin by the Duramin Engineering Co., Ltd., 23, Ilythe Road, London, N.W.10. The only wood incorporated is represented by the oak floor, roller shutters and interior slats, The use of this light