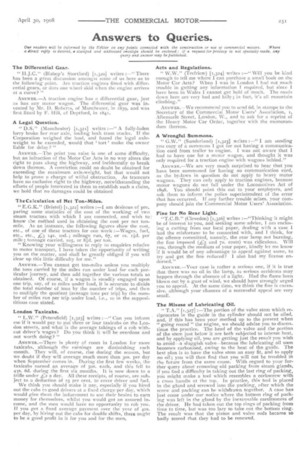 Our readers will be informed by the F.ditor on any Points connected xiitk the construction or use oj commercial motors. Where

a direct reply is desired, a stamped and addressed envelope should be enclosed: if a request for privacy is not specially made, any query and answer may be published.

" FLJ.C." (Bishop's Stortford) [1,320] writes :—" There has been a great discussion amongst some of us here as to the following point. Are traction engines fitted with differential gears, or does one wheel skid when the engine arrives at a curve? "

ANSWER.—A traction engine has a differential gear, just as has any motor wagon. The differential gear was invented by Mr. D. Roberts, of Manchester, in 1839, and was first fitted by F. Hill, of Deptford, in 1841.

" D.S." (Manchester) ti,3211 writes :—" A fully-laden lorry broke her rear axle, fouling both tram tracks. If the Corporation weighed the load, and found the legal axleweight to be exceeded, would that 'tort' make the owner liable for delay? "

ANSWER,—The point you raise is one of some difficulty, but an infraction of the Motor Car Acts in no way alters the right to pass along the highway, and incidentally to break down thereon. A conviction could no doubt be obtained for exceeding the maximum axle-weight, but that would not help to prove a charge of wilful obstruction. As tramcars have no exclusive right to the highway, notwithstanding the efforts of people interested in them to establish such a claim, we hold that no damages could be obtained

The Calculation of Net Ton-Miles.

" E.G.K." (Bristol) [1,322] writes :—I am desirous of pre_ paring some statistics of the cost of the working of two steam tractors with which I am connected, and wish to• know the method used in obtaining the cost per net tonmile. As an instance, the following figures show the cost, etc., of one of these tractors for one week :—Wages, fuel,

" Knowing your willingness to reply to enquiries relative to motor transport, I have taken the opportunity of writing you on the matter, and shall be greatly obliged if you will clear up this little difficulty for me."

ANSWER.—You cannot get ton-mites unless you multiply the tons carried by the miles run under load for each particular journey, and then add together the various totals so obtained. Of course, if a wagon is steadily engaged upon one trip, say, of to miles under load, it is accurate to divide the total number of tons by the number of trips, and then to multiply the quotient (average tons per trip) by the number of miles run per trip under load, i.e., 10 in the supposititious case stated.

" L.W." (Petersfielel) [1,323] writes :—" Can you inform me if it would pay to put three or four taxicabs on the London streets, and what is the average takings of a cab without driver's wages? Do you think it will be overdone and not worth doing? "

ANSWER.—There is plenty of room in London for more taxicabs, although the earnings are diminishing each month. They will, of course, rise during the season, but we doubt if they will average much more than 305. per day when September comes in. During the first few weeks, the taxicabs earned an average of sos. each, and this fell to 435. 6d. during the first six months. It is now down to a trifle under .4'2 a day. All these receipts, of course, are subject to a deduction of 25 per cent, to cover driver and fuel.

We think you should make it Ray, especially if you hired Out the cabs to good drivers at a fixed charge per day, which would give them the inducement to use their brains to earn money for themselves, whilst you would get an assured income, and the men would have no opportunity to rob you. If you get a fixed average payment over the year of 405. per day, by hiring out the cabs for double shifts, there ought to be a good profit in it for you and for the men.

" W.W." (Trefriew) [1,324] writes :—" Will you be kind enough to tell me where I can purchase a small book on the Motor Car Acts? When I was in London I had not much trouble in getting any information T required, but since I have been in Wales I cannot get hold of much. The roads down here are very bad and hilly ; in fact, it's all mountain climbing."

ANSWER.—We recommend you to send 6d. in stamps to the Secretary of the Commercial Motor Users' Association, 1, Albemarle Street, London, W., and to ask for a reprint of the Heavy Motor Car Order, together with the memorandum thereon.

" G.W." (Sunderland) [1,325] writes :—" I am sending you copy of a summons I got for not having a communication cord from trailer to engine. I was not aware that I had to have one for a motor wagon, and thought it was only required for a traction engine with wagons behind."

ANSWER.—'We are very much surprised to hear that you have been summoned for having no communication cord, as the by-laws in question do not apply to heavy motor wagons. They can only apply to traction engines, because motor wagons do not fall under the Locomotives Act of 1898. You should point this out to your employers, and ask them to inform the police superintendent of the error that has occurred. If any further trouble arises, your company should join the Commercial Motor Users' Association.

Fine for No Rear Light.

"T.C.B." (Clevedon) [1,326] writes :—"Thinking it might be of interest to you, and seeking some advice, I am enclosing a cutting from our local paper, dealing with a case I had the misfortune to be connected with, and I think, for the offence committed, namely, the rear lamp not burning, the fine imposed (-e:5 and 7s. costs) was ridiculous. Will you, through the medium of your paper, kindly let me know if it would be of any advantage to appeal against same, to try and get the fine reduced? I also had my license endorsed."

ANSWER.—Your case is rather a serious one, if it is true that there was no oil in the lamp, as serious accidents may happen through the absence of a light. Had the flame been blown out by a gust of wind, we should have strongly urged you to appeal. At the same time, we think the fine is excessive, although your chances of a successful appeal are very small.

The Misuse of Lubricating Oil.

" T.A." 11,327] :—The portion of the valve stem which reciprocates in the guide in the cylinder should not be oiled, and, if this has been your method up to the present when " going round " the engine, we should advise you to discontinue the practice. The head of the valve and the portion of the stem just below it are both subjected to intense heat, and by applying oil, you are getting just the result you wish to avoid— a sluggish valve—because the lubricating oil soon becomes carbonised, owing to the heat of the guide. The best plan is to have the valve stem an easy fit, and to apply no oil; you will then find that you will not be troubled in the future from the same cause. With regard to your further query about removing old packing from steam glands, if you find a difficulty in taking out the last ring of packing, you might make a tool which resembles a corkscrew with a cross handle at the top. In practice, this tool is placed in the gland and screwed into the packing, after which the screw and packing can he withdrawn together. A case has just come under our notice where the bottom ring of packing was left in the gland by the inexcusable carelessness of the driver. He had taken out the top rings of packing from time to time, but was too lazy to take out the bottom ring. The result was that the piston and valve rods became so badly scored that they had to be renewed.