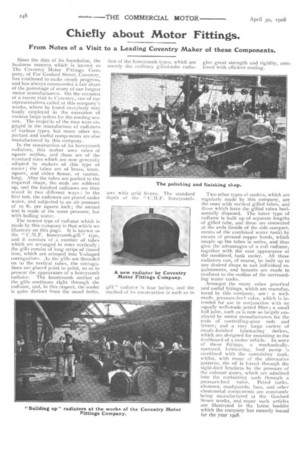 Page 30, 30th April 1908 — Chiefly about Motor Fittings.
Close
Noticed an error?
If you've noticed an error in this article please click here to report it so we can fix it.

From Notes of a Visit to a Leading Coventry Maker of these Components.

Since the date of its foundation, the business concern which is known as The Coventry Motor Fittings Company, of Far Gosford Street, Coventry, has continued to make steady progress, and has always commanded a fair share of the patronage of many of our largest motor manufacturers. On the occasion of a recent visit to Coventry, one of our representatives called at this company's works, where he found everybody very busily employed in the execution of various large orders for the coming season. The majority of the men were engaged in the manufacture of radiators of various types, but many other important and useful components are also manufactured by this company.

In the construction of its honeycomb radiators, this maker uses tubes of Square section, and these are of the standard sizes which are now generally adopted by makers of this type of cooler; the tubes are of brass, 6mm. square, and either 8omm. or I oomm. long. After the tubes are packed to the required shape, the ends are soldered up, and the finished radiators are then tested in two different ways : in the first test, the radiators are placed under water, and subjected to an air pressure of To lb. per square inch; the second test is made at the same pressure, but with boiling water_ The newest type of radiator which is made by this company is that which we illustrate on this page. It is known as the " C.M.F. honeycomb-gill " type, and it consists of a number of tubes which are arranged in rows vertically ; the gills consist of long strips of tinned iron, which are crimped into V-shaped corrugations. As the gills are threaded on to the vertical tubes, the corrugations are placed point to point, so as to present the appearance of a honeycomb radiator. The honeycomb section of the gills continues right through the radiator, and, in this respect, the cooler is quite distinct from the usual imita

tion of the honeycomb types, which are merely the ordinary gilled-tube radia tors with grid fronts. The standard depth of the " C.M.F. honeycomb

gill " radiator is four inches, and the method of its construction is such as to

give great strength and rigidity, combined with efficient cooling.

Two other types of coolers, which are regularly made by this company, are the ones with vertical gilled tubes, and those which have the gilled tubes horizontally disposed. The latter type of radiator is built up of separate lengths of gilled tube, and these are connected at the ends (inside of the side compart_ ments of the combined water tank) by means of pressed copper bends, which couple up the tubes in series, and thus give the advantages of a coil radiator, together with the neat appearance of the combined, tank cooler. All these radiators can, of course, be built up to any desired shape to suit individual requirements, and bonnets are made to conform to the outline of the surrounding water tanks.

Amongst the many other practical and useful fittings, which are manufactured by this company, are : a wellmade, pressure-feed valve, which is intended for use in conjunction with an equally well-made petrol filter ; a small ball joint, such as is now so largely employed by motor manufacturers for the ends of controlling-gear rods and levers ; and a very large variety of nea tly-fi ni shed lubricating devices, which are designed for mounting to the dashboard of a motor vehicle, In some of these fittings, a mechanicallyoperated, lubricating, feed pump is combined with the containing tank, whilst, with many of the alternative patterns, the oil is forced through the sight-feed. brackets by the pressure of the exhaust gases, which are admitted into the containing tank through a pressure-feed valve. Petrol tanks, silencers, mudguards, fans, and other sheet-metal components are constantly being manufactured at the Gosford Street works, and many such articles are illustrated in the latest booklet which the company has recently issued for the year 1908.