Interview with a Provincial Owner. 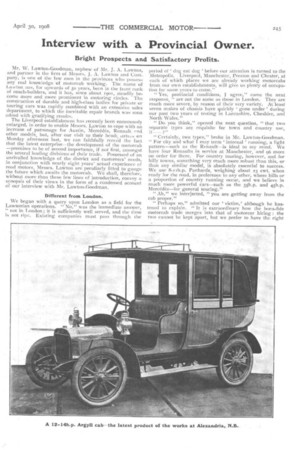 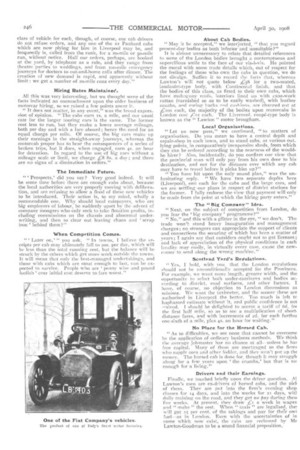 Page 27, 30th April 1908 — Interview with a Provincial Owner.
Close
Noticed an error?
If you've noticed an error in this article please click here to report it so we can fix it.
Keywords : Taxicab, Liverpool, United Kingdom, England, Transportation In New York City, Lawton, Oklahoma

Mr. W. Lawton-Goodman, nephew of Mr. J. A. Lawton, and partner in the firm of Messrs. J. A. Lawton and Com_ pany, is one of the few men in the provinces who possess any real knowledge of motorcab working. The name of Lawton nas, for upwards of 50 years, been in the front rank of coach-builders, and it has, since about tyoi, steadily become more and more prominent in motoring circles. The construction of durable and high-class bodies for private or touring cars was rapidly combined with an extensive sales department, to which the inevitable repair branch was soon added with gratifying results.

The Liverpool establishment has recently been enormously enlarged, in order to enable Messrs. Lawton to cope with an increase of patronage for Austin, Mercedes, Renault end other models, but, after our visit to their headç iart us on Monday afternoon last, we can faithfully record the fact that the latest enterprise—the development of the motorcab —promises to be of second importance, if not first, amongst the several leading divisions of their trade. Possessed of an unrivalled knowledge of the district and customers' needs, in conjunction with nearly eight years' actual experience of road motors, Messrs. Lawton are peculiarly fitted to gauge the future which awaits the motorcab. We shall, therefore, without more than these few lines of introduction, convey a • synopsis of their views in the form of a condensed account of our interview with Mr. Lawton-Goodman.

We began with a query upon London as a field for the Lawtonian operations. " No," was the immediate answer, " not in London ; it is sufficiently well served, and the time is not ripe. Existing companies must pass through the period of dog eat dog ' before our attention is turned to the Metropolis. Liverpool, Manchester, Preston and Chester, at each of which places we are already working motorcabs from our own establishments, will give us plenty of occupation for some years to come."

" Yes, provincial conditions, I agree," came the next response, are not the same as those in London. They are much more severe, by reason of their very variety. At least seven makes of chassis have quickly I gone under ' during our past two years of testing in Lancashire, Cheshire, and North \Vales."

" Do you think," opened the next question, "that two separate types are requisite for town and country use, if----?"

" Certainly, two types," broke in Mr. Lawton-Goodman. " For city and what I may term 'internal ' running, a light pattern—such as the Renault—is ideal to my mind. We have four Renaults in service at Manchester, and 96 more on order for there. For country touring, however, and for hilly towns, something very much more robust than this, or than any similar model, is absolutely essential to success. We use 8-1 th.p. Panhards, weighing about 23 cwt. when ready for the road, in preference to any other, where hills or a proportion of country running occur, and we believe in much more powerful cars—such as the 35h.p. and 45h.p. Mercedes—for general touring."

we interjected, "you are getting away from the cab proper." " Perhaps so," admitted our victim,' although he hastened to explain. " It is extraordinary how the bona-fide motorcab trade merges into that of motorcar hiring : the two cannot be kept apart, but we prefer to have the right

class of vehicle for each, though, of course, our cab drivers do not refuse orders, and any one of the 22 Panhard cabs which are now plying for hire in Liverpool may be, and frequontly is, called from the rank, for a 2o-mile or 50-mile run, without notice. Half our orders, perhaps, are booked at the yard, by telephone as a rule, and they range from theatre parties to weddings, and from too-mile emergency journeys for doctors to out-and-home calls after dinner. The creation of new demand is rapid, and apparently without limit : we get a number of 20-mule runs every day."

All this was very interesting, but we thought some of the facts indicated an encroachment upon the older business of motorcar hiring, so we raised a few points anent it.

-" It does not matter, in any event," was the broad expression of opinion. "The cabs earn is. a mile, and our usual rate for the larger touring cars is the same, The former cost less to run, but they make a lower average mileage, both per day and with a fare aboard; hence the need for an equal charge per mile. Of course, the big cars make up their earnings in the straight-away journeys, whereas the motorcab proper has to bear the consequences of a series of broken trips, hut it does, when engaged, earn 45. an hour for detention. In regard to the use of big cars without a mileage scale or limit, we charge Ss. a day; and there are no signs of a diminution in orders."

Prospects,' did you say? Very good indeed. It will be some time before there are enough cabs about, because the local authorities are very properly moving with deliberation, and are refusing to allow a flood of these new vehicles to be introduced. Their action is, to my mind, wholly a commendable one. Why should local ratepayers, who are big employers of labour, be suddenly upset by the advent of company mongers who only seek to take flotation profits, including commissions on the chassis and abnormal underwriting, and then to clear out leaving chaos and scrap iron ' behind them?"

Later on,' " you ask. " In towns, I believe the receipts per cab may ultimately fall to 2os. per day, which will be less than the total running cost, but the balance will he struck by the others which get more work outside the towns. It will mean that only the best-managed undertakings, and those with cabs which are stout enough to last, can be expected to survive. People who are penny wise and pound foolish ' over initial cost deserve to fare worst."

" May it he accepted," we interjected, " that you regard

• present-day -bodies as both inferior-arid unsuitable?" It is almost unnecessary to. relate that detailed references to some of the London bodies brought a contemptuous and supercilious smile to the face of our vis-A-vis. He pointed the moral with some trade details which, out of respect for the feelihgs of those who own the cabs in question, we do not divulge.Suffice it to record the facts that, whereas

Lawton's will not quote below for a two-seated, landaulet-type body, with Continental finish, and that the bodies of this class, as fitted to their own cabs, which

have mahogany roofs, interiors lined up with cane-work rattan (varnished so as to be easily washed)' with leather souabs, and sering hacks reid cughions, are charged out at Zion each, the majority of the bodies upon motorcabs in London cost j7sK each. The Liverpool, coup&type body is known as the " Lawton" motor brougham.

" Let us now pass," we continued, " to matters of organisation. Do you mean to have a central del:I& and repair-shop in each town, and to stand cabs, at various out_ lying points, in comparatively inexpensive sheds, from which they can be ordered according to the nearness of the wouldhe hirer? Also, incidentally, do you confirm our view that the provincial man will only pay from his own door to his destination, and not for the distance over which any cab may have to travel before it picks him up?" "You have hit upon the only sound plan," was the unhesitating reply. "We have two separate depeits here (Liverpool), one each for the cabs and the large cars, and we are settling our plans in respect of diStrict stations for the former. T fully endorse the view that payment will only be made from the point at which the hiring party enters."

" Next, on the subject of competition from London, do you fear the 'big company ' programme?" "No," and this with a glitter in the eye, " we don't. The trade won't stand heavy inauguration and management charges; no strangers can appropriate the support of clients and connections the securing of which has been a matter of years ; I again say that outsiders ought not to get licenses ; and lack of appreciation of the physical conditions in each locality may easily, in virtually every case, cause the newcomer to send along the wrong machine."

" Yes, I hold, with you, that the London regulations should not he unconditionally accepted for the Provinces. For example, we want more length, greater width, and the opportunity to select both under-carriages and bodies according to district, road surfaces, and other factors. I have, of course, no objection to London dimensions as minima. We want the taximeter, and the sooner these are authorised in Liverpool the better. Too much is left tc haphazard estimate without it, and public confidence is not reained. I should. be delighted to accept a tariff of od. for the first half mile, so as to see a multiplication of shortdistance fares, and with increments of 2d. for each further one-sixth of a mite, plus 45. an hour for waiting."

No Place for the Horsed Cab.

" As to difficulties, we see none that cannot be overcome by the application of ordinary business methods. We think the average jobmaster has no chance at all-unless be has free capital. Many of them are .mortgaged to the firrns who supply corn and other fodder, and lhev won't put up the money. The horsed cab is done for, though it may struggh along for a few Years upon the crumbs,' but that is no enough for a living."

Drivers and their Earnings.

Finally, we touched briefly upon the driver question. M Lawton 'it men are ex-drivers of horsed cabs, and the picl. of them. They are put into the firm's evening shop classes for 14 days, and into the works for 21 days, witl daily training on the road, and they get no pay during then five weeks. At present, they draw Z:t a week in wages and " make " the rest. When " taxis " are legalised, the \vill get 2S per cent, of the takings and pay for their owr fuel—as in London. Even with the uncertainties of in come which now exist, the cabs are reckoned by Mr Lawton-Goodman to be a sound financial proposition.