Later this month trade unions gather for their annual conference. 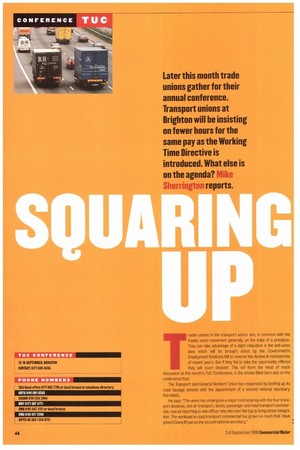 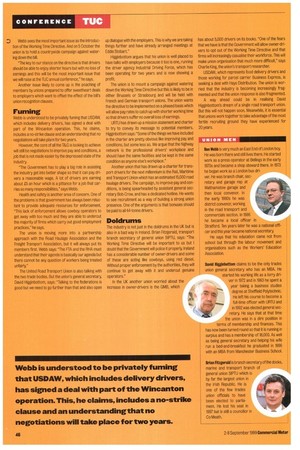 Transport unions at Brighton will be insisting on fewer hours for the same pay as the Working Time Directive is introduced. What else is on the agenda? Mikr Sherrington reports.

Trades unions in the transport sector are, in common with the trades union movement generally, on the edge of a precipice. They can take advantage of a slight relaxation in the anti-union laws which will be brought about by the Government's Employment Relations Bill to reverse the decline in membership of recent years. But if they fail to take the opportunity offered they will court disaster. This will form the meat of much discussion at this month's TUC Conference, in the smoke-filled bars and on the conference floor.

The Transport and General Workers' Union has responded by beefing up its road haulage division with the appointment of a second national secretary, Ron Webb.

joined Danny Bryan as the second national secretary" Webb sees the most important issue as the introduction of the Working Time Directive. And on 5 October the union is to hold a countrywide campaign against watering down the bill.

The key to our stance on the directive is that drivers should be able to enjoy shorter hours but with no loss of earnings and this will be the most important issue that we will raise at the TLJC annual conference," he says.

Another issue likely to come up is the poaching of members by unions prepared to offer sweetheart deals to employers which want to offset the effect of the bill's union recognition clauses.

Webb is understood to be privately fuming that USDAW, which includes delivery drivers, has signed a deal with part of the Wincanton operation. This, he claims, includes a no-strike clause and an understanding that no negotiations will take place for two years.

However, the core of all the T&G is looking to achieve will still be negotiations to improve pay and conditions, a job that is not made easier by the depressed state of the industry.

"The Government has to play a big role in assisting the industry get into better shape so that it can pay drivers a reasonable wage. A lot of drivers are earning about £5 an hour which is a pittance for a job that carries so many responsibilities," says Webb.

Health and safety is another area of concern. One of the problems is that government has always been reluctant to provide adequate resources for enforcement. "This lack of enforcement allows cowboy operators to get away with too much and they are able to undercut the majority of firms which carry out good employment practices," he says.

The union is moving more into a partnership approach with the Road Haulage Association and the Freight Transport Association, but it will always put its members first. Webb says: "The FTA and the RHA must understand that their agenda is basically our agenda but there cannot be any question of workers being treated unfairly."

The United Road Transport Union is also talking with the two trade bodies. But the union's general secretary, David Higginbottom, says: "Talking to the federations is good but we need to go further than that and also open up dialogue with the employers. This is why we are taking things further and have already arranged meetings at Eddie Stobart."

Higginbottom argues that his union is well placed to have talks with employers because it too is one, running the driver agency Industrial Driving Force, which has been operating for two years and is now showing a proft.

The union is to mount a campaign against watering down the Working Time Directive but this is likely to be in either Brussels or Strasbourg and will be held with French and German transport unions. The union wants the directive to be implemented on a phased basis which will allow pay rates to catch up with shorter working time so that drivers suffer no overall loss of earnings.

URTU has drawn up a mission statement and charter to try to convey its message to potential members. Higginbottom says: "Some of the things we have included in the charter are pretty obvious like improving pay and conditions, but some less so. We argue that the highway network is the professional drivers' workplace and should have the same facilities and be kept in the same condition as anyone else's workplace."

Another union that has drawn up a charter for transport drivers for the next millennium is the Rail, Maritime and Transport Union which has an estimated 15,000 road haulage drivers. The campaign, to improve pay and conditions, is being spearheaded by assistant general secretary Bob Crow, and has a dedicated hotline. He wants to see recruitment as a way of building a strong union presence. One of the arguments is that bonuses should be paid to all 44-tonne drivers.

The industry is not just in the doldrums in the UK but is also in a bad way in Ireland. Brian Fitzgerald, transport branch secretary of general union SIPTU, says: "The Working Time Directive will be important to us but I doubt that the Government will police it properly. Ireland has a considerable number of owner-drivers and some of these are acting like cowboys, using red diesel. Without proper enforcement by the authorities, they will continue to get away with it and undercut genuine operators."

In the UK another union worried about the increase in owner-drivers is the GMB, which has about 5,000 drivers on its books. One of the fears that we have is that the Government will allow owner-drivers to opt out of the Working Time Directive and that firms will increasingly casualise their workforce. This will make union organisation that much more difficult," says Charlie King, the union's transport researcher.

USDAW, which represents food delivery drivers and those working for parcel carrier Business Express, is seeking a deal with Hays Distribution. The union is worried that the industry is becoming increasingly fragmented and that the union response is also fragmented.

A way ahead could be in realising David Higginbottom's dream of a single road transport union. But this will not happen soon. Meanwhile, it is essential that unions work together to take advantage of the most fertile recruiting ground they have experienced for 20 years.