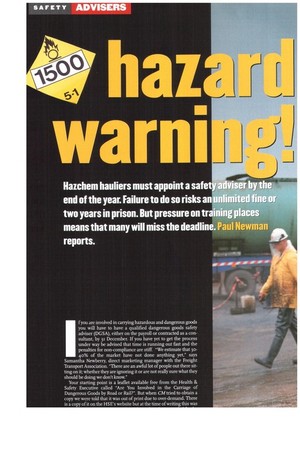 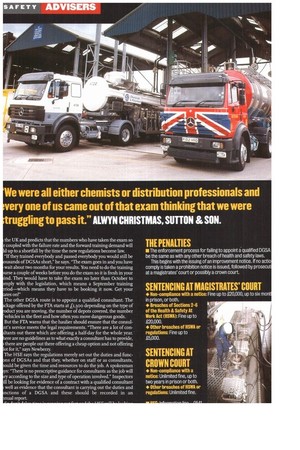 Hazchem hauliers must appoint a safet end of the year. Failure to do so risks an two years in prison. But pressure on training places means that many will miss the deadline. Paul Newman reports.

[you are involved in carrying hazardous and dangerous goods you will have to have a qualified dangerous goods safety adviser (DGSA), either on the payroll or contracted as a consultant, by 31 December. If you have yet to get the process under way be advised that time is running out fast and the penalties for non-compliance are stiff. "We estimate that 30 40% of the market have not done anything yet," says Samantha Newberry, direct marketing manager with the Freight Transport Association. "There are an awful lot of people out there sitting on it; whether they are ignoring it or are not really sure what they should be doing we don't know."

Your starting point is a leaflet available free from the Health & Safety Executive called "Are You Involved in the Carnage of Dangerous Goods by Road or Rail?". But when CM tried to obtain a copy we were told that it was out of print due to over-demand. There is a copy of it on the HS E's website but at the time of writing this was the UK and predicts that the numbers who have taken the exam so r coupled with the failure rate and the forward training demand will d up to a shortfall by the time the new regulations become law.

If they trained everybody and passed everybody you would still be ousands of DGSAs short," he says. 'The exam goes in and you have wait about two months for your results. You need to do the training urse a couple of weeks before you do the exam so it is fresh in your ind. They would have to take the exam no later than October to triply with the legislation, which means a September training rind—which means they have to be booking it now. Get your a tes on!"

The other DGSA route is to appoint a qualified consultant. The ckage offered by the FTA starts at £1,300 depending on the type of oduct you are moving, the number of depots covered, the number vehicles in the fleet and how often you move dangerous goods.

But the FTA warns that the haulier should ensure that the consulnt's service meets the legal requirements. "There are a lot of condtants out there which are offering a half-day for the whole year. iere are no guidelines as to what exactly a consultant has to provide, there are people out there offering a cheap option and not offering ot for it," says Newberry.

The HSE says the regulations merely set out the duties and funcns of DGSAs and that they, whether on staff or as consultants, iould be given the time and resources to do the job. A spokesman ys: "There is no prescriptive guidance for consultants as the job will ry according to the size and type of operation involved." Inspectors ill be looking for evidence of a contract with a qualified consultant well as evidence that the consultant is carrying out the duties and nctions of a DGSA and these should be recorded in art inual report.