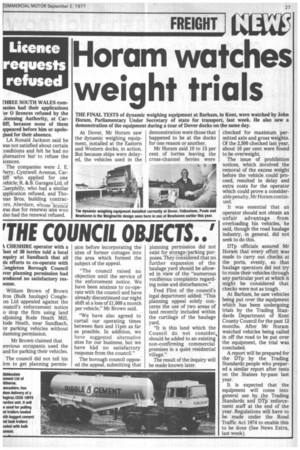 THE FINAL TESTS of dynamic weighing equipment at Barham, in Kent, were watched by John Horam, Parliamentary Under Secretary of state for transport, last week. He also saw a demonstration of the equipment during a tour of Dover docks on the same day.

At Dover, Mr Horam saw the dynamic weighing equipment, installed at the Eastern and Western docks, in action. But because ships were delayed, the vehicles used in the demonstration were those that happened to be at the docks for one reason or another.

Mr Horam said 10 to 15 per cent of lorries leaving the cross-channel ferries were checked for maximum permitted axle and gross weights. Of the 2,500 checked last year, about 10 per cent were found to be overweight.

The issue of prohibition notices, which involved the removal of the excess weight before the vehicle could proceed, resulted in delay and extra costs for the operator which could prove a considerable penalty, Mr Horam continued.

It was essential that an operator should not obtain an unfair advantage from overloading his vehicles, he said, though the road haulage industry, in general, did not seek to do this.

DTp officials assured Mr Horam that every effort was made to carry out checks at the ports, evenly, so that haulage operators did not try to route their vehicles through any particular port at which it might be considered that checks were not as tough.

A report will be prepared for the DTp by the Trading Standards people who prepared a similar report after tests on the Staines by-pass last year.

It is expected that the equipment will come into general use by the Trading Standards and DTp enforcement staff at the end of the year. Regulations will have to be made under the Road Traffic Act 1974 to enable this to be done (See News Extra, last week).