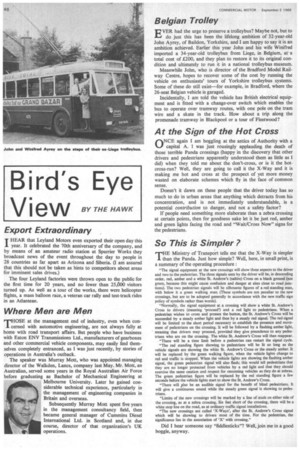 T HEAR that Leyland Motors even exported their open day this I year. It celebrated the 70th anniversary of the company, and by means of an amateur radio station at Spurrier Works they broadcast news of the event throughout the day to people in 28 countries as far apart as Arizona and Siberia. (I am assured that this should not be taken as hints to competitors about areas for imminent sales drives.) The four Leyland factories were thrown open to the public for the first time for 20 years, and no fewer than 251J00 visitors turned up. As well as a tour of the works, there were helicopter flights, a mass balloon race, a veteran ear rally and test-track rides in an Atlantean.

Where Men are Men

"THOSE at the management end of industry, even when con cerned with automotive engineering, are not always fully at home with road transport affairs. But people who have business with Eaton ENV Transmissions Ltd., manufacturers of gearboxes and other commercial vehicle components, may easily find themselves completely entranced, as I was just recently, by stories of operations in Australia's outback. The speaker was Murray Mott, who was appointed managing director of the Walkden, Lanes, company last May. Mr. Mott, an Australian, served some years in the Royal Australian Air Force before graduating as Bachelor of Mechanical Engineering at Melbourne University. Later he gained considerable technical experience, particularly in the management of engineering companies in Britain and overseas. Subsequently Murray Mott spent five years in the management consultancy field, then became general manager of Cummins Diesel International Ltd. in Scotland and, in due course, director of that organization's UK operations.

EVER had the urge to preserve a trolleybus? Maybe not, but to do just this has been the lifelong ambition of 32-year-old John Ayrey, of Baildon, Yorkshire, and I am happy to say it is an ambition achieved. Earlier this year John and his wife Winifred imported a 34-year-old trolleybus from Liege, in Belgium, at a total cost of £200, and they plan to restore it to its original condition and ultimately to run it in a national trolleybus museum. Meanwhile John, who is director of the Bradford Model Railway Centre, hopes to recover some of the cost by running the vehicle on enthusiasts' tours of Yorkshire trolleybus systems. Some of these do still exist—for example, in Bradford, where the 26-seat Belgian vehicle is garaged. Incidentally, I am told the vehicle has British electrical equipment and is fitted with a change-over switch which enables the bus to operate over tramway routes, with one pole on the tram wire and a skate in the track. How about a trip along the promenade tramway in Blackpool or a tour of Fleetwood?

ONCE again I am boggling at the antics of Authority with a capital A. I was just rousingly applauding the death of those terrible Panda crossings (happy in the discovery that other drivers and pedestrians apparently understood them as little as I did) when they told me about the don't-cross, or is it the hotcross-run? Well, they are going to call it the X-Way and it is making me hot and cross at the prospect of yet more money wasted on elaborate schemes which fly in the face of common sense. Doesn't it dawn on these people that the driver today has so much to do in urban areas that anything which detracts from his concentration, and is not immediately understandable, is a potential contribution to danger, and not a safety factor? If people need something more elaborate than a zebra crossing at certain points, then for goodness sake let it be just red, amber and green lights facing the road and "Wait/Cross Now" signs for the pedestrians.

So This is Simpler ?

THE Ministry of Transport tells me that the X-Way is simpler than the Panda. Just how simple? Well, here, in small print, is a summary of the operating procedure: "The signal equipment at the new crossings will show three aspects to the driver and two to the pedestrian. The three signals seen by the driver will be, in descending order red, amber and a white St. Andrew's (saltire) Cross on a black ground (not green, because this might cause confusion and danger at sites close to road junctions). The two pedestrian signals will be silhouette figures of a red standing man, with below it a green walking man. (These symbols are not peculiar to the new crossings, but are to be adopted generally in accordance with the new traffic sign policy of symbols rather than words).

"There will be a time limit before a pedestrian can restart the signal cycle.

"There will "Ise be an audible signal for the benefit of blind pedestrians. It will give a continuous sound while the steady green signal is showing to pedestrians.

"Limits of the new crossings will be marked by a line of studs on either side of the crossing, as at a zebra crossing. Six feet short of the crossing, there will be a white stop line on the road, as at ordinary traffic signal installations.

"The new crossings are called 'X-Ways', after the St. Andrew's Cross signal which will be showing to drivers most of the time. For the pedestrian, the significance lies in the association of 'X' with crossing."

Did I hear someone say "fiddlesticks"? Well, join me in a good boggle, anyway.