A Chain-toggle Clutch of Novel Design 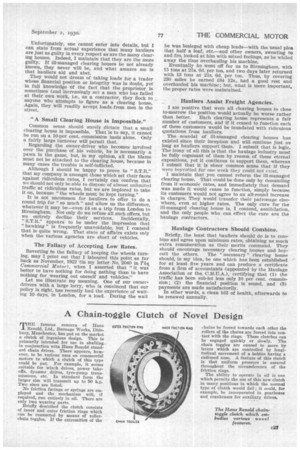 Page 49, 2nd September 1930 — A Chain-toggle Clutch of Novel Design
Close
Noticed an error?
If you've noticed an error in this article please click here to report it so we can fix it.

THE famous concern of Hans Renold, Ltd., Burnage Works, Didsbury, Manchester, has put on the market a clutch of ingenious design. This is primarily intended for use in shafting in conjunction witti Hans Renold standard chain drives. There appears, however, to be various uses on commercial motors to which a clutch of this type could be put. For example, it seems suitable for winch drives, power takeoffs, dynamo drives, tyre-pump transmissions, etc. In standard form the larger size will transmit up to 50 h.p. Two sizes are listed.

No friction facings or springs are employed and the mechanism will, if required, run entirely in oil. There are only two wearing parts.

Briefly described the clutch consists of inner and outer friction rings which can be connected by means of rollerchain toggles. If the extremities of the chains be forced towards each other the rollers of the chains are forced into contact with the rings. These clutches can be engaged quickly or slowly. The chain toggles are caused to move by levers which are controlled by longitudinal movement of a bobbin having a radiused nose. A feature of this clutch is that uniform pressure is assured throughout the circumference of the friction rings.

The ability to operate in oil is one which permits the use of this new clutch in many positions in which the normal type of clutch would fail ; it could, for example, be incorporated in gearboxes and crankcases for auxiliary drives.