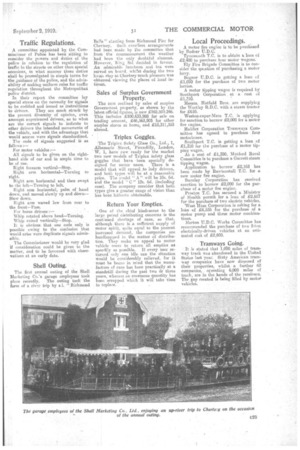 A committee appointed by the Commissioner of Police has been sitting to consider the powers and duties of the police in relation tothe regulation of traffic in the streets on other than special occasions, in what manner those duties shall be promulgated in simple terms for the guidance of the police, and the advisability of making uniform rules for traffic regulation throughout the Metropolitan police district.

In their report the committee lay special stress on the necessity for signals to be codified and issued as instructions to drivers. They are much struck by the present diversity of opinion, even amongst experienced drivers, as to what are the correct signals to indicate to other drivers the intended movements of the vehicle, and with the advantage that would accrue were signals standardized.

The code of signals suggested is as follows :- For motor vehicles : All signals to be given on the righthand side of car and in ample time to be of use.

Right arm horizontal and then swept to the left—Turning to left.

Right arm horizontal, palm of hand down, and moved slowly up and &win— Slow down.

Right arm waved low from rear to the front—Pass.

It is obvious that one code only is possible owing to the confusion that would arise were duplicate signals admissible.

. The Commissioner would be very glad if consideration could be given to the matter, and to be favoured with observations at an early date.

The first annual outing of the Shell Marketing Co.'s garage employees took place recently. The outing took the form of a river trip by s.l. " Richmond

Belle" starting from Richmond Pier for Chertsey. Such excellent arrangements had been made by the committee that from the commencement the weather had been the only doubtful element. However, King Sbi decided in favour. An admirable lu.nehean and tea were served on board, whilst during the two hoina stay at Chertsey much pleasure was olataieed viewing the places of local infereat

The Triplex Safety Glass Co., Ltd. 1, Albemarle Street, Piccadilly, London, W. 1, have row ready for the market two new mcsleLs of Triplex a.ftsty glass goggles that have been specially de signed for motor users. There is a model that will appeal ,to lady drivers, and both types will be at a reasonable price. The umdel " A " will be 10s. 6d. and the model C" 12s. 6d. (including case). The company consider that both types give a greater range of vision than has been hitherto obtainable.

One of the chief hindrances to the large petrol distributing concerns is the continued shortage of cans, so that, although there is a sufficient supply of motor spirit, quite equal to the present increased demand, the companies are handicapped in the matter of distribution. They make an appeal to motor vehicle users to return all empties as

speedily as possible. If every user returned only ene idle can the situation would be considerably relieved, for it must be borne in mind that the mann.: facture of cams has been practically at a standstill during the past two dr three years, whereas k.ri enormous quantity has been scrapped which it will take time

A motor fire engine is to be purchased by Bedear U.D.C. TYnernouth T.C. is to obtain a loan of £2,400 to purchase four motor wagons.

Ely Fire Brigade Committee is to consider the question of purchasing a motor lorry. . Bognor. U.D.C. is getting a loan of £1,090 for the purchase of two meter lorries.

A motor tipping wagon is required by. Southport 'Corporation at a cost of 21,310.

Messrs. Hatfield Bros. are supplying the Wortley R.D.C. with a steam tractor for 2610.

Weston-super-Mare T.C. is applying for sanction to borrow £2,000 for a motor fire engine. Halifax Corporation Tramwa:ys Committee has agreed to purchase four motorbuses.

Southport T.C. is getting a loan of £1,310 for the purchase of a motor tipping wagon. At a cost of £1,350, Mutford Rural Committee is to purchase a Garrett steam tipping wagon. Application to borrow £2,168 has been made by Raw tenstall .T.C. for a new motor fire engine. Bu reiley Corporation has received sanction to borrow £2,000 for the purchase of a motor fire engine.

,Preston T.C. has secured a. Ministry of Health permit, for a loan of 22,65/7 for the purchase of two electric vehicles.

West Ham Corporation is asking for a loan of 26,535 for the purchase of a motor pump and three motor combinations.

Merton U.D.C. Works Committee has recommended the purchase of two 2-ton electrically-driven vehicles at an estimated cost of 22,600.

It is stated that 1,090 miles of tramway track *as abandoned in the United States last 'year'. Sixty American tramway companies have now disposed of their properties, whilst a further 62 companies, . °praline6,000 miles of track, are in the hands of the receivers. The. gap created is being filled by motor vehicles.