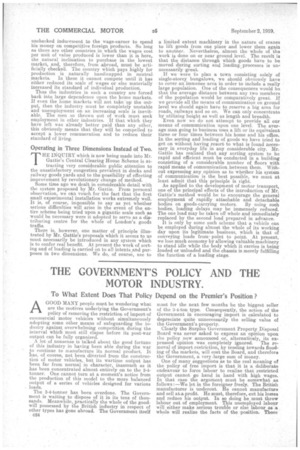 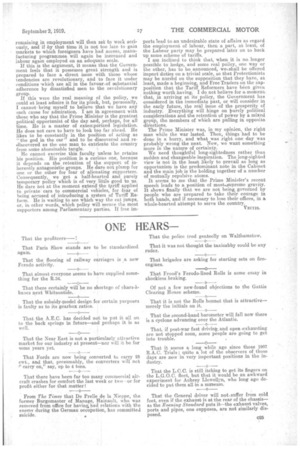 Page 2, 2nd September 1919 — THE GOVERNMENT'S POLICY AND THE MOTOR INDUSTRY.
Close
Noticed an error?
If you've noticed an error in this article please click here to report it so we can fix it.

To What Extent Does That Policy Depend on the Premier's Position ?

AGOOD MANY people must be wondering what are the motives unfierlying the Government's policy of removing the restriction of import-of commercial motor vehicles without simultaneously adopting some other means of safeguarding the industry against overwhelming competition during the interval which. must still elapse before its post-war output can be fully organized.

A lot of nonsense is talked about the good fortune of this industry in having been able during the war to continue to manufacture its normal product. It has, of course, not been diverted from the construction of motor vehicles,but its wartime output has been far from normal in character, inasmuch as it has been concentrated almost entirely on to the 3-4tonner. One cannot turn at a moment's notice from the production of this model to the more balanced output of a series of vehicles designed for various loads.

The 3-4-tonner has been overdone. The Government is waiting to dispose of it in its tens of thousands. Meanwhile, practically the whole of the goodwill possessed by the British industry in respect of other types has gone abroad. The Government itself 024

must for the next few months be the biggest seller of the 3-4-ton type. Consequently, the action of the Government in encouraging import is calculated to depreciate quite unnecessarily the selling value of the Government's property.

Clearly the Surplus Government Property Disposal Board was never asked to express an opinion upon the policy now announced or, alternatively, its expressed opinion was completely ignored. The removal of import restriction, by tending towards flooding of fhe markets, will cost the Board, and therefore the Government, a very ,large BUM of money.

One of many suggestions as to the real meaning of the policy of free import is that it is a deliberate endeavour to force labour to realize that restricted output cannot go hand in hand with high wages. In that case the argument must be somewhat as follows :—We let in the foreigner freely. The British manufacturer is undercut. He cannot manufacture and sell at a profit. He must, therefore, cut his losses and reduce his output. In so doing he must throw labour out of employment. This unemployed labour will either make serious trouble or else labour as a whole will realize the facts of the .position. Those

remaining in employment will then set to work seriously, and if iby that time it is not too late to gain markets to which foreigners have had access, manufacturing programmes will again be increased and labour again employed on an adequate scale.

If this is the argument, it means that the Government feels that it possesses great strength and is prepared to face a direct issue with those whose tendencies are revolutionary, and to face it under conditions which are all in the favour.of substantial adherence by dissatisfied men to the revolutionary group. If this were the real meaning of the policy, we could at least admire it for its pluck, but, personally, I cannot-bring myself to believe 'that we have any such cause for admiration. I am in agreement with those who say that the Prime Minister is the greatest political opportunist of the day, and, perhaps, for all time. He is a master of extemporized legislation. He does not care to have to look too far ahead. He likes to be constantly in the position of acting as " the god in the car" and to be discovered and rediscovered as the one man to extricate the country from some abominable tangle.

He cannot exercise this faculty unless he retains his position. His position is a curious one, because it depends on the retention of the support of inherently antagonistic groups. He dare not plump for one or the other for fear of alienating supporters. Consequently, we get a half-hearted and purely temporary policy which is of very little, good to us. The dare not at the moment extend the tariff applied to private cars to commercial vehicles, for -fear of being misused of introducing a system of Tariff Reform. He is waiting to see which way the cat jumps, or, in other words, which policy -will secure the most supporters among Parliamentary parties. If free im

ports lead to an undesirable state of affairs as regard the employment of labour, then a part, at least, of the Labour party may be prepared later on to back up some scheme of tariffs.

I am inclined to think that, when it is no. longer passible to hedge, and some real policy, one way or the other, has to be announced, we,shall be catered import duties on a trivial scale, so that Protectionists may be nursed on the supposition that they have, at least, made a beginning, and:Free Traders on the supposition that the Tariff Reformers have been given , nothing worth having. I do not believe for a moment, that, in arriving at its policy, the Government has considered in the immediate past, or will consider in the early future, the real issue of the prosperity of industry. Everything will hinge on isurely political considerations and the retention .of power by a mixed group, the members of which are pulling in opposite directions.

The Prime Minister was, in my opinion, the right man while the war lasted. Then, things had to be done in a hurry, and what was right one day was probably wrong the next. Now, we want something more in the nature of certainty.

We need thoughtful long-sightedness rather than sudden and changeable inspiration. The long-sighted view is not in the least likely to prevail as long as opportunism is the predominant note in the Cabinet and the main job is the holding together of a number of mutually repulsive atoms. It seems to me that the Prime Minister's recent speech leads -to a position of mostssupreme gravity. It shows finally that we are not being; governed by people who are prepared to take their courage in both hands, and if necessary to lose their offices, in a, whole-hearted attempt to serve the country.