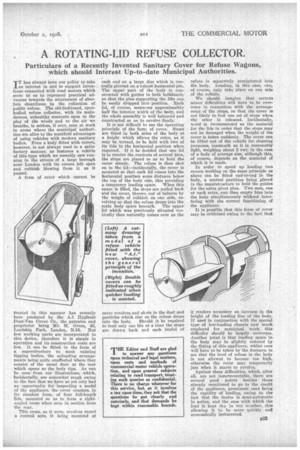 Page 9, 2nd October 1928 — A ROTATING-LID REFUSE COLLECTOR.
Close
Noticed an error?
If you've noticed an error in this article please click here to report it so we can fix it.
Keywords : Brakes, Disc Brake

Particulars of a Recently Invented Sanitary Cover for Refuse Wagons, which should Interest Up-to-date Municipal Authorities.

IT has always been our policy to take an interest in and to support inventions connected with road motors which seem to us to represent practical advances towards the attainment of absolute cleanliness in the collection of public refuse. The old-fashioned, openbodied refuse collector, with its malodorous, unhealthy contents open to the play of the winds and to the air we breathe, is seldom, if ever, seen at work in areas where the municipal authorities are alive to the manifold advantages of using vehicles with modern sanitary bodies. Even a body fitted with covers, however, is not always used in a satisfactory manner, as instance a vehicle of this type which we recently saw running in the streets of a large borough near London with its covers left open and rubbish blowing from it as it passed.

A form of covet which cannot be treated in this manner has recently been produced by the A.1 Hygienic Dust-Van Cover Co., the patentee and proprietor being Mr. M. Green, 43, Lordship Park, London, N.16. But few working parts are incorporated in this device, therefore it is simple in operation and its construction costs are low. It can be fitted in the form of a superstructure to most existing tipping bodies, the unloading arrangements being quite unaffected where they consist of the usual door at the rear which opens as the body tips. As can be seen from our illustrations, which, incidentally, are somewhat rough owing to the fact that we have as yet only had an opportunity for inspecting a model of the appliance, the cover consists, in Its simplest form, of four full-length lids, mounted so as to form a rightangled cross when seen in section from the rear.

This cross, as it were, revolves round a central axis, it being mounted at each end on a large disc which is centrally pivoted on a robust horizontal pin. The upper part of the body is constructed with guides in both bulkheads, so that the pins supporting the litls can be easily dropped into position. Each lid, of course, measures approximately half the interior width of the body, and the whole assembly is well balanced and constructed so as to revolve freely.

It is not difficult to see the operating principle of the form of cover. Stops are fitted in both sides of the body at a height which allows the rotor, as it may be termed, to be held with two of its lids in the horizontal position when required. If it be decided that one lid is to receive the contents of several bins, the stops are placed so as to hold the cover steady. The refuse is then shot on to the lid—incidentally, the cover is mounted so that each lid comes into the horizontal position some distance below the top of the body side, this providing a temporary loading space. When this space is filled, the stops are pulled back and the cover, thrown out of balance by the weight of rubbish on one side, revolving so that the refuse drops into the main body space beneath. The upper lid which was previously situated vertically then naturally comes over as the cover revolves and shuts in the dust and particles which rise as the refuse drops into the body. Should it be required to load only one bin at a time the stops are drawn back and each binful of refuse is separately precipitated into the body. Loading, in this case, can, of course, only take place on one side of the vehicle.

We should imagine that certain minor difficulties will have to be overcome in connection with the arrangement of the stops, so that the cover is not likely to foul one set of stops when the other is released. Incidentally, wood is recommended as the material for the lids in order that the stops may not be damaged when the weight of the cover is taken suddenly. The cover can be lifted out of the vehicle for cleaning purposes, inasmuch as it is reasonably light, weighing about 2 cwt. in the case of a body of average size, although this, of course, depends on the material of which it is made.

In order to speed up loading two covers working on the same principle as above can be fitted end-to-end in the body, a central partition being placed in the superstructure to hold the guides for the extra pivot pins. Two men, one at each rotor, can then empty bins into the body simultaneously without interfering with the correct functioning of the appliance.

it renders necessary an increase in the height of the loading line of the body. If used in conjunction with the special type of low-loading chassis now much employed for municipal work, this difficulty should be largely overcome. Another point is that loading space inthe body may be slightly reduced by the fitting of this appliance, whilst care will have to be taken by the dustmen to see that the level of refuse in the body is not allowed to become too high, otherwise the rotor may temporarily jam when it starts to revolve.

Against these difficulties, which, after all, are not insurmountable,, there are several good points besides those already mentioned to go to the credit of the appliance, prominent ones being the rapidity of loading, owing to the fact that the device is semi-automatic in action, and the ease with which the load is kept dry in wet weather, this allowing it to be more quickly and economically Incinerated.