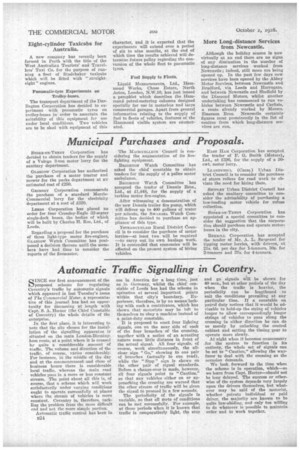 SINCE our first announcement of the proposed scheme for regulating Coventry's traffic by automatic signals which appeared in last Tuesday's issue of The Conon4rcial Motor. a representa-. tire of this journal has had an opportunity for discussing at length with Capt. S. A. Hector (the Chief Constable of Coventry) the whole details of the enterprise,

In the first place, it is interesting to note that the site chosen for the installation of the signalling apparatus is • situated on the main London-Birminghem route, at a point where it is crossed by quite a considerable amount of traffic. The volume and direction of the traffic, of course, varies eansiderably: For instance, in the middle of the day and at the commencement and close of business hours there is considerable local traffic, whereas the main road vehicles pass in a more or less conetant stream. The point about all this is, of course, that a scheme which will work satisfactorily under varying conditions ought to operate suecessfully at places where the stream of vehicles is more constant. Coventry is, therefore, tackling the problem from the more difficult cud rind not the more simple portion.

Automatic traffic control has been in B24 use in America for a long time, just as in Germany, whilst the chief constable of Leeds has had the scheme in operation at several important peinte within that city's boundary. Experience, therefore, is by no means lacking with such a contrivance, which has shown that motorists may be left to themselves to obey a machine instead of a point-duty constable.

It is proposed to erect four lighting signals, one on the near side of each of the four branches of the crossing, together with a notice of an arresting nature Some little distance in front of the actual signal. All four signals, of course, work simultaneously, the allclear sign "Go," showing to one pair of branches (actually to one road), while the " Stsm " sign is shown on the other pair of signal standards. Before a change-over is made, however, all four signals point to "Caution," so that any vehicles either on or approaching the crossing are warned that the other stream of traffic will be given the signal to proceed in a few seconds. The periodicity of the signals is variable, so that all sorts of conditions can be met successfully. For example, at those periods when it is known that traffic is comparatively light, the stop

and go signals will be shown for 40 secs., but at other periods of the day when the traffic is heavier, the periodicity can be lengthened • to suit the conditions prevailing at any particular time. If a constable on patrol duty notices that it would be advisable to hold-up the string of vehicles longer to allow correspondingly longer strings of vehicles to pass along the crossing in either direction he can do so merely by unlocking the control cabinet and setting the timing gear to operate more slowly.

At night when it becomes unnecessary for the system to function in its entirety, the whole set of signals can be set to "Caution," allowing the wayfarer to deal with the crossing as the occasion demands.

We look forward to the time when the scheme is in operation, which—so we learn from Capt. Hector—should not be long delayed. The success or otherwise of the system depends very largely upon the drivers themselves, but whatever may be said of the motorist, whether private individual or paid driver, the majority are known to be quite law-abiding, and only too willing to do whatever is possible to maintain order and to work together.