TYPES OF BODYWORK FOR REFUSE COLLECTION. 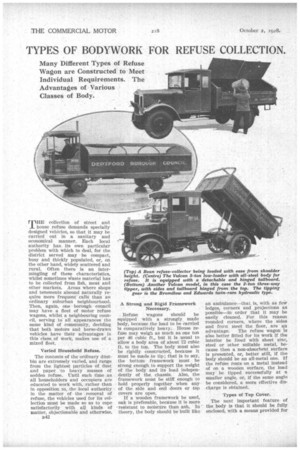 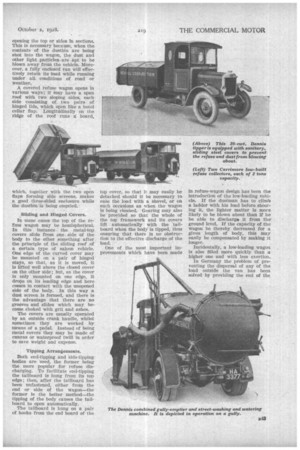 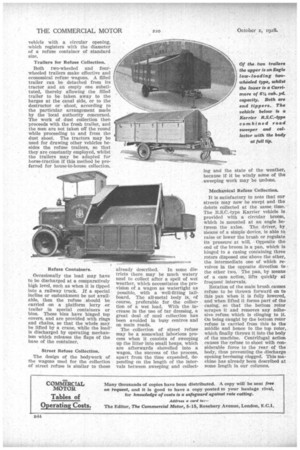 Page 26, 2nd October 1928 — TYPES OF BODYWORK FOR REFUSE COLLECTION.
Close
Noticed an error?
If you've noticed an error in this article please click here to report it so we can fix it.

THE collection of street and house refuse demands specially designed vehicles, so that it may be carried out in a sanitary and economical manner. Each local authority has its own particula-r problem with which to deal, for the district served may be compact, busy and thickly populated, or, on the other hand, widely scattered and rural. Often there is an intermingling of these characteristics, whilst sometimes Waste material has to be collected from fish, meat and other markets. Areas where shops and tenements abound naturally require more frequent calls than an ordinary suburban neighbourhood. Then, again, one borough council may have a fleet of motor refuse wagons, whilst a neighbouring council, serving to all appearances the same kind of community, deciding that both motors and horse-drawn vehicles have their advantages in this class, of work, makes use of a . mixed fleet.

The contents of the ordinary dlistbin are extremely varied, and range from the lightest particles of dust and paper to heavy masses of sodden refuse. Until such time as all householders and occupiers are educated to work with, rather thah in opposition to, the local authority in the matter of the removal of refuse, the vehicles used for its collection must be made so as to cope satisfactorily with all kinds of matter, objectionable and otherwise. B42

A Strong and Rigid Framework Necessary.

Refuse wagons should be equipped with a strongly made body, because the load to be carried is comparatively heavy. House refuse may weigh as much as one ton per 46 cubic ft., but it is usual to allow a body area of about 72 cubic ft. to the ton. The body must also be rigidly constructed, because it must be made to tip; that is to say, the bottom framework must be strong enough to support the weight of the body and its load independently of the chassis. Also, the framework must be stiff enough to hold properly together when any of the side and end doors or top covers are open.

If a wooden framework be used, oak is preferable, because it is more -resistant to moisture than ash. In theory, the body should be built like an ambulance—that is, with as few ledges, corners and projections as possible—in order that it may be easily cleaned. For this reason rounded corners, where the sides and froit meet the floor, are tin advantage. The refuse wagon is also better fitted for its work if the interior be lined with sheet zinc, steel or other suitable metal, because then a non-absorbent surface is presented, or, better still, if the body should be an all-metal one. If the refuse rests on a metal instead of on a wooden surface, the load may be tipped successfully at a smaller angle, or, if the same angle be considered, a more effective discharge is obtained.

The next important feature of the body is that it should be fully enclosed, with a means provided for opening the top or sides in sections. This is necessary because, when the contents of the dustbin are being shot into the wagon, the dust and other light particles are apt to be blown away from the vehicle. Moreover, a fully enclosed van will effectively retain its -load while running under all conditions of road or Weather.

A covered refuse wagon opens in various ways; it may have a span roof with two sloping sides, each side consisting of two pairs of hinged lids, which open like a hotel cellar flap. Longitudinally on the ridge of the roof runs a board, which, together with the two open flaps forming side screens, makes a good three-sided enclosure while the dustbin is being emptied.

In seine cases the top of the refuse wagon may be hemispherical. In this instancethe metal-top covers slide from oneside of the body to the other something after the principle of the sliding roof of a certain type of saloon vehicle. One edge of the curved cover may be mounted on a pair of hinged stays, so that, as it is moved, it is lifted well above the closed cover on the other side; but, as the cover Is only mounted on one edge, it drops on its leading edge and here comes in contact with the unopened side of the body. In this way a dust screen is formed, and there is the advantage that there are no grooves and slides which may become choked with grit and ashes.

The covers are usually operated by an outside crank handle, whilst sometimes they are worked by means of a pedal. Instead of being metal covers they may be made of canvas or waterproof twill in order to save weight and expense.

Both end-tipping and side-tipping bodies are used, the former being the more popular for refuse discharging. To facilitate end-tipping the tailboard is hung from its top edge; then, after the tailboard has been unfastened, either from the end or side of the wagon—the former is the better method—the tipping of the body causes the tailboard to open automatically.

top cover, so that it may easily be detached should it be necessary to ease the load with a shovel, or on such occasions as when the wagon is being cleaned. Gearing may also be provided so that the whole of the top framework and its covers lift automatically with the 'tailboard when the body is tipped, thus ensuring that there is no obstruction to the effective discharge of the load.

One of the most important improvements' which have heen made

in refuse-wagon design has been the introduction of the low-loading vehicle. If the dustman has to climb a ladder with his load before shooting it, the lighter matter is more likely to be blown about than if he be able to discharge it from the ground level. If the capacity of the wagon be thereby decreased for a given length of body, this may easily be compensated by making it longer.

Incidentally, a low-loading wagon is also filled more quickly than a higher one and with Jess exertion.

In Germany the problem of preventing the dispersal of any of the load outside the van has been solved by providing the end of the vehicle with a circular opening, which registers with the diameter of a refuse container of standard size.

Both two-wheeled and fourwheeled trailers make effective and economical refuse wagons. A filled trailer can be detached from its tractor and an empty one substituted, thereby allowing the filled trailer to be taken away to the barges at the canal side, or to the destructor or shoot, according to the particular arrangement made by the local authority concerned. The work of dust collection then proceeds with the fresh trailer, and the men are not taken off the round while proceeding to and from the dust shoot. The tractors may be used for drawing other vehicles besides the refuse trailers, so that they are constantly employed, whilst the trailers may be adapted for horse-traction if this method be preferred for house-to-house collection.

Occasionally the load may have to be discharged at a comparatively high level, such as when it is tipped into a railway truck. If a special incline or embankment be not available, then the refuse should be carried on a platform lorry or trailer in special containers or bins. These bins have hinged top covers, and are provided with rings and chains, so that the whole may be lifted by a crane, while the load' is discharged by operating mechanism which releases the flaps of the base of the container.

The design of the bodywork of the wagons used for the collection of street refuse is similar to those already described. In some dis tricts there may be much watery mud to collect after a spell of wet weather, which necessitates the provision of a wagon as watertight as possible, with a well-fitting tailboard. The all-metal body is, of course, preferable for the collection of a wet load. With the increase in the use of tar dressing, a great deal of mud collection has been avoided in busy centres and on main roads.

The collection of street refuse may be a somewhat laborious process when it coosistS of sweeping up the litter into small heaps, which are afterwards shovelled into a wagon, the success of the process, apart from the time expended, depending on the length of the intervals between sweeping and collect ing and the state of the weather, because if it be windy some of the .sweeping work may be undone, Mechanical Refuse Collection.

It is satisfactory to note that our streets May now be swept and the debris collected at the same time... The R.S.C.-type Karrier vehicle is provided with a circular broom, which is mounted at an angle rbetween the axles. The driver, by means of a simple device, is able to raise or lower the brush or regulate its pressure.. at will. Opposite the end of the broom is a pan, which is hinged to a easing containing three rotors disposed one above the other, the intermediate one of which revolves in the opposite direction to the other two. The pan, by Means of a cam action, lifts quickly at frequent intervals.

Rotation of the main brush causes refuse to be thrown forward on to this pan when it is fully lowered, and when lifted it forms part of the casing, so that the bottom rotor scrapes it and removes any adhesive refuse which is clinging to it. On being caught by the bottom rotor refuse is carried from this to the middle and hence to the top rotor, which finally throws it into the body of the machine. Centrifugal action causes the refuse to shoot with considerable force to the rear of the body, thus preventing the discharge opening becoming clogged. This machine has already been described at some length in our columns.