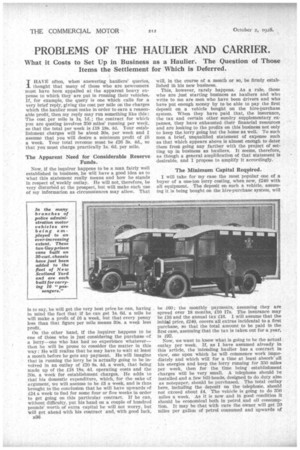 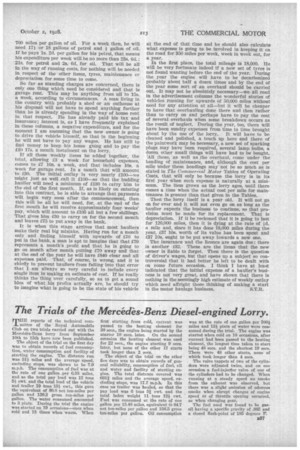 Page 20, 2nd October 1928 — PROBLEMS OF THE HAULIER AND CARRIER.
Close
Noticed an error?
If you've noticed an error in this article please click here to report it so we can fix it.

What it Costs to Set Up in Business as a Haulier. The Question of Those Items the Settlement for Which is Deferred.

T HAVE often, when answering hauliers' queries, 1 thought that many of those who are newcomers must have been appalled at the apparent heavy expense to which they are put in running their vehicles: If, for example, the query is one which calls for a very brief reply, giving the cost per mile on the charges which the haulier must make in order to earn a reasonable profit, then my reply may run something like this : The cost per mile is 1s. id.; the contract for which you are quoting involves 350 miles' running per week,• so that the total per week is 118 18s. 4d. Your establishment charges will be about 30s. per week and I assume that you will desire a minimum profit of 16 a week. Your total revenue must be £26 3s. 4d., so that you must charge practically is. 6d. per mile.

The Apparent Need for Considerable Reserve

Now, if the inquirer happens to be a man fairly well established in business, he will have a good idea as to what this statement really means and how he stands in respect of_weekly outlay. He will not, therefore, be very disturbed at the prospect, but will make such use of my information as circumstances may allow. That is to say, he will get the very best price he can, having in mind the fact that if he can get Is. ed. a mile he will make a profit of £6 a week, but that every penny less than that figure per mile means 30s. a week less profit.

On the other hand, if the inquirer happens to be one of those who is just considering the purchase of a lorry—one who has had no experience whatever— then he will be prone to consider the matter in this way : He will realize that he may have to wait at least a month before he gets any payment. He will imagine that in running the lorry he is actually going to be involved in an outlay of £20 8s. 4d. a week, that being made up of the 118 18s. 4d. operating costs and the aos. a week for establishment charges. He adds to that his domestic expenditure, which, for the sake of argument, we will assume to be £3 a week, and is thus brought to the conclusion that he will have upwards of £24 a week to find for some four or five weeks in order to get going on this particular contract. If he can, without difficulty, put his hand on a couple of hundred pounds' worth of extra capital he will not worry, but will get ahead with his contract and, with good luck, B36 will, in the course of a month or so, be firmly established in his new business.

This, however, rarely happens. As a rule, those who are just starting business as hauliers and who write to me are men who have been drivers and who have put enough money by to be able to pay the first deposit on a vehicle bought on the hire-purchase system. When they have paid that, the insurance, the tax and certain other sundry supplementary expenses, they have exhausted their financial resources and are looking to the profits on this business not only to keep the lorry going but the home as well. To such men a brief, unqualified statement of expense such as that which appears above is almost enough to deter them frond going any farther with the project of setting up in business as hauliers. It seems, therefore, as though a general amplification of that statement Is desirable, and I propose to amplify it accordingly.

I will take for my case the most popular one of a buyer of a one-ton lorry costing, when new, £240 with all equipment. The deposit on such a vehicle, assuming it is being bought on the hire-purchase system, will be £60; the monthly payments, assuming they are spread over 18 months, £10 17s. The insurance may be £16 and the annual tax 116. I will assume that the initial price, £240, covers all extras incidental to a first purchase, so that the total amount to be paid in the first case, assuming that the tax is taken out for a year, is 192.

Now, we want to know what is going to be the actual outlay per week. If, as I have assumed already in this article, the intending haulier has a contract in view, one upon which he will commence work immediately and which will for a time at least absorb all his energies and keep the lorry running for 350 miles per week, then for the time being establishment charges will be very small. A telephone should be installed and a few hill-heads, designed to do duty also as notepaper, should be purchased. The total outlay here, including the deposit on the telephone, should not exceed about £4. The vehicle is going to do 350 miles a week. As it is new and in good condition it should be economical both in petrol and oil consumption. It may be that with care the owner will get 20 miles per gallon of petrol consumed and upwards of 700 miles per gallon of oil. For a week then, he will need 17f or 18 gallons of petrol and gallon of oil. If he pays 1s. 2d. per gallon for his petrol, that means his expenditure per week will be no more than 238. 6d. : 21s. for petrol. and 2s. 6d. for oil. That will be all In the way of running costs, for nothing will be needed in respect of the other items, tyres, maintenance or depreciation for some time to come.

So far as standing charges are concerned, there is only one thing which need be considered and that is garage rent. This may be anything from nil to 15s. a week, according to circumstances. A man living in the country with probably a shed or an outhouse at his disposal will not have to spend anything further than he is already spending in the way of house rent in that respect. He has already paid his tax and Insurance; interest is, as I have frequently explained in these columns, a negative expenditure, and for the moment I am assuming that the new owner is going to drive the vehicle himself, so that in the beginning he will not have to pay any wages. He has still 1.91 find money to keep his home aning and to pay the £10 17s. a month instalment on the lorry.

If all these weekly items be added 'together, the total, allowing £3 a week for household expenses, comes to £7 10s. a week, and that includes 10s. a week for garage rent. In a month that will amount to £30. The initial outlay is very nearly £100—we might just as well call it £100—so that the budding haulier will need a minimum of £130 to carry him to the end of the first month. If, as is likely on entering Into this contract, he is able to arrange that payments will begin very soon after the commencement, then this will be all he will need, for, at the end of the first month he will receive approximately four weeks' pay, which will amount to £105 all but a few shillings. That gives him £30 to carry on for the second month and leaves £75 to put away in the bank.

It is when this stage arrives that most hauliers make their real big mistake. Having run for a month only and finding himself with upwards of £70 to put in the bank, a man is apt to imagine that that £70 represents a mouth's profit and that he is going to go on month after month putting £70 away and that at the end of the year be will have £840 clear and all expenses paid. That, of course, is wrong, and it is chiefly to prevent hauliers from falling into that error that I am always so very careful to include every single item in making an estimate of cost. If he really thinks the thing over carefully, so as to get a sound idea of what his profits actually are, he should try to imagine what is going to be the state of his vehicle at the end of thal time and he should also calculate what expense is going to be involved in keeping it on the road for 350 miles per week, week in week out, for a year.

fa the first place, the total mileage is 18,000. 1.1e win be very fortunate indeed if a new set of tyres is not found wanting before the end of the year. During the year the engine will have to be decarbonized probably about half a dozen times and by the end of the year some sort of an overhaul should be carried out. It may not be absolutely necessary—we all read in the advertisement columns the wonderful stories of vehicles running for upwards of 50,000 miles without need for any attention at all—but it will be cheaper to have that overhauling done there and then rather than to carry on and perhaps have to pay the cost of several overhauls when some breakdown occurs as the result of neglect. During the year, too, there will have been sundry expenses from time to time brought about by •the use of the lorry. It will have to be cleaned and polished, a touch up here and there of the paintwork may be necessary, a new set of sparkingplugs may have been required, several lamp bulbs, a dozen other small things will have had to be bought. AIl these, as well as the overhaul, come under the heading of maintenance, and, although the cost per mile under these headings may not be so much as is stated in The Commercial Motor Tables of Operating Costs, that will only be because the lorry is in its first year when such expense is naturally at a minimum. The item grows as the lorry ages, until there comes a time when the actual cost per mile for maintenance is greater than that given in the Tables.

Then the lorry itself is a year old. It will not go on for ever and it will not even go on as long as the haulier expects the business to continue, so that provision must be made for its replacement. That is depreciation. If it be reckoned that it is going to last for 120,000 miles, then it is dying at the rate of A. a mile and, since it has done 18,000 miles during the year, £37 10s. worth of its value has been spent and £37 10s. ought to be put away towards a new one.

The insurance and the licence are again due: there is another 132. These are the items that the new owner is liable to forget. Then there is the question of driver's wages, but that opens up a subject so controversial that it had better be left to be dealt with on some future occasion. I think I have at least indicated that the initial expense of a haulier's business is not very great, and have shown that there is nothing in the seemingly high estimate of weekly outlay which need affright those thinking of making a start in the motor haulage business. &Tat