The Use of Aluminium Alloys on Motor 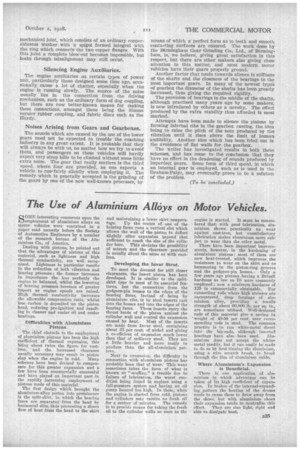 Page 19, 2nd October 1928 — The Use of Aluminium Alloys on Motor
Close
Noticed an error?
If you've noticed an error in this article please click here to report it so we can fix it.

SOME interesting comments upon the employment of aluminium alloys on motor vehicles were contained in a paper read recently before the Society of Automotive Engineers by a member of the research bureau of the Aluminium Co., of America.

Dealing with pistons, he pointed out that the advantages of pistonsof this material, such as lightness and high thermal conductivity, are well recognized. Lightness in particular results in the reduction of both vibration and bearing pressure; the former increases in importance the less perfectly the engine he balanced, whilst the lowering of bearing pressure becomes of greater import as engine speeds are raised. High thermal conductivity increases the allowable compression ratio, whilst Tess earbon is deposited on the piston head, reducing pre-ignition and resulting in cleaner and cooler oil and cooler bearings.

• The 'chief obstacle to the employment of aluminium pistons has been the high coefficient of thermal expansion, this being about twice the figure for castiron, and the increased clearance usually necessary may result in piston slap when the engine is cold. Many schemes have been devised to compensate for this greater expansion and few have been commercially successful and have played an important part in the rapidly increasing employment of pistons made of this material.

The first design which. brought the aluminium-alloy piston into prominence is the split-skirt, in which the bevies faces are separatedfrom the head by horizontal slits, thiis preventing a direct flow of heat from the head to the skirt

and maintaining a lower skirt tempera

ttize. Up the centre of one of the bearing faces runs a vertical slot which allows the wall of the piston to deflect slightly after expansion beyond that sufficient to reach the size of the cylinder bore. This obviates the possibility of seizure and the clearance provided is usually about the same as with castiron.

To meet the demand for still closer clearances, the insert piston has been developed. It is similar to the splitskirt type in most of its essential features, but the connection from the gudgeon-pin bosses to the edges of the bearing faces, instead of being by aluminium ribs, is by steel inserts cast into the bosses and into the edges of the bearing faceS. These inserts carry the thrust loads of the piston against the cylinder wall and control the expansion caused by heat. Most of the inserts are made from Inver steel, containing about 33 per cent, of nickel and giving a co-efficient of expansion much lower than that of ordinary steel. They are a little heavier and more costly to produce than the all-aluminium pattern.

Next to expansion, the difficulty in connection with aluminium pistons has probably been that of wear. This wear sometimes takes the form of what is known as -" scuffing." a trouble due to failure of lubrication, _the worst condition being found in engines using a full-pressure system and having an oil pump located too high. In these, when the engine is started from cold, pistons and cylinders may receive no fresh oil for a matter of minutes. The remedy is to provide means for taking the fresh oil to the cylinder walls so soon as the

engine is started. It must be remembered that, with good lubrication, she. rainium shows practically no wear against cast-iron, but unsatisfactory lubrication makes aluminium more subject to wear than the other metal.

There have been important improvements, however, in the hardening of aluminium pistons; most of them are now heat-treated, which improves the resistance to wear on the skirt and to hammering in the piston-ring grooves and the gudgeon-pin bosses. Only a few years ago pistons having a BriqeII hardness as low as 70 were commonly employed ; now a minimunt hardness of -125 is commercially obtainable. For connecting rods where high stresses arc encountered, drop forgiugs of aluminium alloy, providing a tensile strength of about 60,000 lb. per sq. in., are sometimes .utilized, -Well-designed rods of this material give a saving in 'weight of 40-50 per cent, over corresponding rods in steel. The common practice is to run white-metal direct into the bigentls, although inserted bearings have also been used. . Mu minions not accept the whitemetal readily, but it can easily be made to do so IsSr first tinning the aluminium, using a wire scratch brush, to break through the film of Rimini= oxide.

Where Aluminium's Expansion is Beneficial.

There is one application of aluminium in which advantage -can be taken of its high coefficient of expansion. In -brakes of the internal-expanding pattern the heating of the drums tends to cause them to draw away from the shoes, but with aluminium shoes their expansion tends to neutralize this