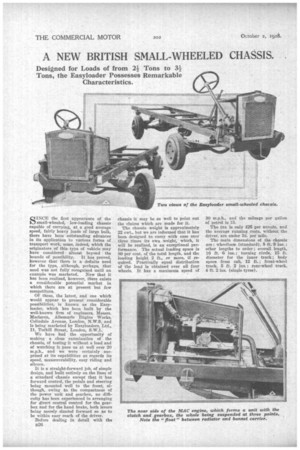 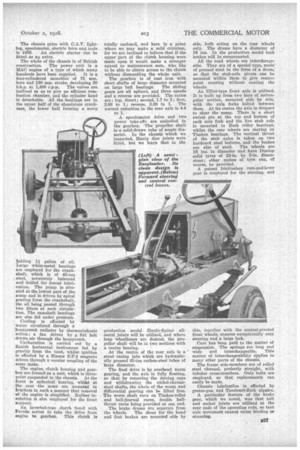 Page 10, 2nd October 1928 — A NEW BRITISH SMALL-WHEELED CHASSIS
Close
Noticed an error?
If you've noticed an error in this article please click here to report it so we can fix it.

SINCE the first appearance of the small-wheeled, low-loading chassis capable of carrying, at a good average speed, fairly heavy loads of large bulk, there have been outstanding advances in its application to various forins of transport work, some, indeed, which the originators of this type of vehicle may have considered almost beyond the bounds of possibility. It has proved, however that there is a definite need for the type, although, perhaps, that need was not fully recognized until an example was marketed. Now that it has been realized, however, there exists a considerable potential market in which there are at present but few competitors.

Of these, the latest, and one which would appear to present considerable possibilities, is known as the Easyloader, which has been built by the well-known firm of engineers, Messrs. Maelaren, Albemarle Engine Works, Colindale Avenue, London, N.W.9, and is being marketed by Easyloaders, Ltd., 11, Totlaill Street, London, S.W.1.

We have had the opportunity of making a dose examination of the chassis, of testing it without a load and of watching it pass us at well over 20 m.p.h., and we were certainly surprised at its capabilities as regards its speed, mamenvrability, easy riding and silence.

It is a straight-forward job, of simple design, and built entirely on the lines of a standard chassis except that it has forward control, the pedals and steering being mounted well to the front, although, owing to the compactness of the power unit and gearbox, no difficulty has been experienced in arranging for direct central control for the gearbox and for the hand brake, both levers being merely slanted forward so as to be within easy reach of the driver.

Before dealing in detail with the chassis it may be as well to point out the claims which are made for it.

The chassis weight is approximately 22 cwt., but we are informed that it has been designed to carry with east over three times its own weight, which, it will be realized, is an exceptional performance. The actual loading space is 80 per cent, of the total length, and the loading height 2 ft., or more, if reQuired. Practically equal distribution of the load is obtained over all four wheels. It has a maximum speed of 30 m.p.h., and the mileage per gallon of petrol is 15.

The tax is only £26 per annuln, aud the average running costs, without the driver, are under 3d. per mile.

The whole of the chassis is of British

construction. The power unit is a MAC engine of a type of which many hundreds have been supplied. It is a fourecylindered monobIoc of 73 mm. bore and 130 mm. stroke, developing 20 b.h.p. at 1,400 Limn. The valves are inclined so as to give an efficient combustion chamber, and the cylinder head is detachable. All the bearings are in the upper half of the aluminium crankcase, the lower half forming a sump

holding 1i gallon of oil. Large white-metal bearings arc employed for the crankshaft, which is of 45-ton steel, accurately balanced and drilled for forced lubrication. The pump is situated at tho lowest part of the sump and is driven by spiral gearing from the crankshaft, the oil being passed through two filters at each circulation. The camshaft bearings are also fed under pressure.

Cooling is effected by water circulated through a honeycomb radiator by thermosiphonic action; a fan driven by a fiat belt draws air through the honeycomb. Carburation is carried out By a Zenith horizontal instrument fed by gravity from the tank, whilst • ignition is effected by a Simms S.F.4 magneto driven through a vernier coupling of the same make.

The engine, clutch housing and gearbox are formed as a unit, which is three' point suspended in the chassis. At the front is spherical bearing, whilst at the rear the arms arc mounted in brackets in such a manner that removal of the engine is simplified. Rubber inEnlati on is also employed for the front support.

An inverted-cone clutch faced with Ferodo servee to take the drive from engine to gearbox. This clutch is totally enclosed, and here is a point where we may make a mild criticism, for we are inclined to believe that if the upper part of the clutch housing were made open it would make a stronger appeal to maintenance men, who like to be able to obtain access to the clutch without dismantling the whole unit.

A speedometer drive and tevo power take-offs are embodied in the gearbox. The propeller shaft is a solid-drawn tube of ample diameter. In the chassis which we inspected, Hardy disc joints were fitted, but we learn that in the production model Hardy-Spicer allmetal joints will be utilized, and where long wheelbeses are desired, the propeller shaft will be in two sections with a centre bearing. • At the centre of the rear axle is a stout casing into which are hydraulically pressed 45-ton carbon-steel tubes of large diameter.

The final drive is by overhead worm gearing, and the axle is fully floating, so that by removing the driving cam and withdrawing the nickel-chromesteel shafts, the whole of the worm and differential gearing can be lifted free. The worm shaft runs on Timken-roller and ball-journal races, double ballthrust races being provided at one end.

The brake drums are separate from the wheels. The shoes for the hand and foot brakes arc mounted side by

side, .both acting on the rear wheels only. The drums have a diameter of 16 ins. In the production model both brakes will be compensated.

All the road wheels are interchangeable. They are of a special type, made of pressed steel in the form of a drum, so that the stub-axle pivots can be mounted within them to give centrepoint steering without canting the wheels.

An Elliot-type front axle is utilieed. It is built up from two bars of rectangular section, mounted side by side, with the axle forks belted between them. At its centre the axle is dropped to clear the sump. There is a short swivel pin at the top and bottom of each axle fork and the live stub axle is mounted in Bock roller bearings, whilst the rear wheels are carried on Timken bearings. The vertical thrust of the stub axles is taken on two hardened steel buttons, and the bushes are also of steel. The wheels are 16 ins, in diameter and have Dunlop solid tyres of 22-in. by 5-in, dimensions; other makes of tyre can, of course, be provided. A patent frictionless cam-and-lever gear is employed for the steering, and this, together with the central-pivoted front wheels, ensures exceptionally easy steering and a large lock. Care has been paid to the tnattd of suspension. The springs are long and wide and interchangeable. This matter of interchangeability applies to many other parts of the chassis.

The frame side-members are of rolled steel channel, perfectly straight, with tubular cross-members. Only bolts are employed, so that replacements can easily be made. Chassis lubrication is effecthd by grease-gun and Tecalemit-Zerk nipples.

A particular feature of the brake gear, which we noted, was that ball and socket joints are utilized at the rear ends of the operating rods, so tint axle movement cannot cause binding or stressing,