Oil in Excess: Where is the Heavy-oil Engine? 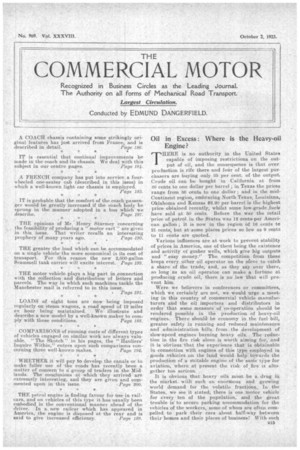 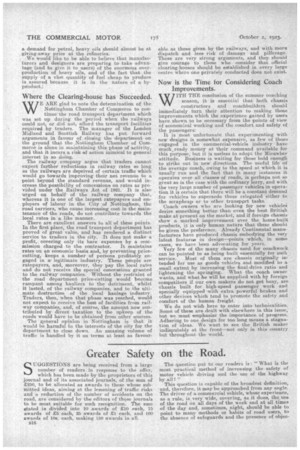 Page 1, 2nd October 1923 — Oil in Excess: Where is the Heavy-oil Engine?
Close
Noticed an error?
If you've noticed an error in this article please click here to report it so we can fix it.

THERE HERE is DO authority in the United States capable of imposing restrictions on the output of oil, and the consequence is that overproduction is rife there and foils of the largest pur-. chasers are buying only 35 per cent, of the output Crude oil can be bought in California at from 40 cents to one dollar per barrel ; in Texas the prices range from 50 cents to one dollar ; and in the midContinent region, embracing North Texas, Louisiana, OklahOmit and Kansas $2.20 per barrel is the highest price obtained recently, whilst some lowsgrade.,fuels have sold at 50 cents. Before the .war the retail 'price of petrol .in the States was 12 cents per American gallon ; it is now in the region Of 16 cents to 21 cents, but at some places prices so low as 9 cents

to iicents are quoted. , Various influences are at work to prevent stability of prices in America, one of thens. being the existence and activity of 'gusher wells, which give big outputs and "easy money." The competition from these keeps every, other oil operator on the niove to catch a share of the trade, and, as they say over there, so long as an oil operator can make a fortune at producing crude oil, there is no law that will prevent him.

Were we believers in cenferences or committees, which we certainly are not, we would urge a meeting in this country of commercial vehicle manufacturers and the oil importers and distributors in order that some measnre'•of Co-operation should be rendered possible' in the production of heavy-oil engines. There shoulU be economy in the fuels bill, greater. safety in running and reduced maintenance and administration bills from the ' development of slow-speed engines burning heavy, oils. The reduction in the fire risk alone is worth aiming for, and it is obvious that the experience that is obtainable in connection with engines of this type employed in goods vehicles on the land would help towards the production sif,a suitable engine of the same type for aviation, where at present the risk of fire is altogether too serious.

It is obvious that heavy oils must be a drug in

the market. with such an enormous and growing world demand for the volatile fractions.s In the States, we see it stated, there is one motor vehicle for .every ten of the population, and the great trouble is" to secure parking accommodation for the. vehicles of the workers, .sonie of whom are often compelled to park their ears about half-way between their homes and their places of business! With such

a demand for petrol, heavy oils should almost be at , giving-away price at the refineries.

, We would like to be able to believe that manufacturers and designers are preparing to take advantage (and to give it to users) of the enormous overproduction of heavy oils, and of the fact that the supply of a Vast quantity of fuel cheap to produce is assured because it is in the nature of a byproduct.;

Where the Clearing-house has Succeeded.

WE ARE glad to note the determination of the Nottingham Chamber of Commerce to continue the road transport department which was set up during the period when the railways could not, or did not, afford the transport facilities required by traders. The manager of the London Midland and Scottish Railway has put forward arguments in favour of eloping the department on the ground that the .Nottingham Chamber of Commerce is alone in maintaining this phase of activity, and that it incurs a risk of action inimical to general interest in so doing. The railway company argue that traders cannot. expect further reductions in railway rates so long as the railways are deprived of certain traffic which would go towards improving their net revenue to a point beyond the standard revenue, and would increase the possibility of concessions on rates as provided under the Railways Act of 1921. It is also urged on behalf of the railway company that, whereas it is one of the largest ratepayers and employers of labour in the City of Nottingham, the road carriers, who cause increasing cost in the maintenance of the roads, do not contribute towards the local rates in a like manner.

There are excellent answers to all of these points. In the first place, the road transport department has proved of great value, and has rendered a distinct service to traders in the city. It does not make a profit, covering only its bare expenses by a com

mission charged to the contractor. It maintains rates on an economic basis and, by preventing pricecutting, keeps a number of persons profitably engaged in a. legitimate industry. These people are ratepayers, and, moreover, they pay the local rates and do not receive the special concessions granted to the railway companies. Without the restraint of the road departmentprice-cutting would become rampant among hauliers to the detriment, whilst it lasted, of the railway companies, and to the ultimate destruction of the local haulage industry. Traders, then, when that phase was reached, would not expect to receive the best of facilities from railway companies and, of course, the amount now con tributed by companies, taxation to the upkeep of the roads would have to be obtained from other sources.

The general opinion in Nottingham is that it would be harmful to the interests of the city for the department to close down. An amazing volume of traffic is handled by it on terms at least as favour

able as those given by the railways, and with more dispatch and less risk of damage and pilferage. These are very strong arguments, and they should give courage to those who consider that official clearing-houses should be established in every large centre where one privately conducted does not exist.

Now is the Time for Considering Coach Improvements.

WITU THE conclusion of the summer coaching season, it is essential that both chassis constructors and coachbuilders should immediately turn their attention to making those improvements which the experience gained by users have shown to be necessary from the points of view of economical working and the comfort and safety of the passengers. , It is most unfortunate that experimenting with new designs is somewhat e?rpensive, as few of those engaged in the commercial-vehicle industry have much, ready money at their command available for this purpose, but it is useless to adopt the 1Viicawber attitude. Business is waiting for those bold enough to strike out in new directions. The useful life of the average coach, owing to the speed at which it is usually run and the fact. that in many instances it operates over all classes of roads, is perhaps not so great as is the case with the ordinary lorry, and with the very large number of passenger vehicles in operation it is certain that there will be a constant demand for vehicles to supersede those relegated either to the scrapheap or to other transport tasks.

Coach owners who are looking for new vehicles desire something better than even the best British make at present on the market, and if foreign chassis show a marked improvement over the home-built products, it is only human nature that these should be given the preference. Already Continental.manufacturers have Produced chassis embodying the very latest features in design—points which, in some cases, we have been advocating for years. Very few of the many chassis used for coachwork can be pointed to as being built essentially for such ,

service. Most of them, are chassis originally intended for use as goods vehicles and modified to a small extent by increasing the final-drive ratio and lightening the springing. What the coach owner wants, and what he will be supplied with by foreign competitors if our own makers do not get busy, are chassis built for high-speed passenger work and specially equipped with extra powerful brakes and other devices which tend to promote the safety and comfort of the human freight.

We do not wish here to enter into technicalities. Some of these are dealt with elsewhere in this issue, but we must emphasize the importance of progress. Adhering to one design for too long means a stagnation of ideas. We want to see the British maker indisputably at the front—not onlyin this country but throughout the world.