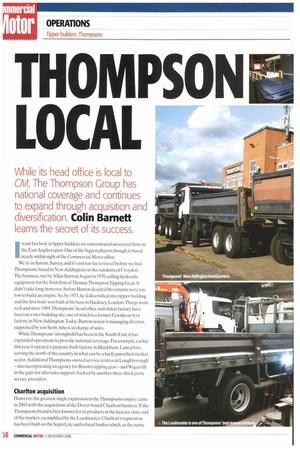 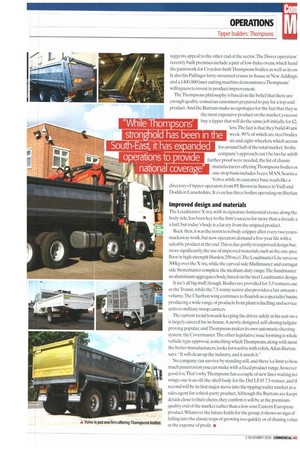 While its head office is local to CM, The Thompson Group has national coverage and continues to expand through acquisition and

learns the secret of its success.

In our last look at tipper buildersswe concentrated on several firms in the East Anglia region. One of the biggest playersthough,is based nearly within sight of the Commercial Motor office.

We're in Sutton. Surrey,and it's not too far to travel before we find Thompson& based in New Addington on the outskirts of Croydon. The business, run by Allan Burton, began in 1970. selling hydraulic equipment for the Irish firm ofThomasThompson Tipping Gear. It didn't take long, however, before Burton decided the returns were too low to build an empire. So, by 1973, he'd diversified into tipper building and the first body was built at his base in Hackney. London.Things went well and since 1989.Th ompsons' head office and oldest factory have been on a two-building site,one of which is a former Goodyear tyre factory, in New Addington.Today. Burton senior is managing director, supported by son Scott. who is in charge of sales.

While Thompsons' stronghold has been in the South-East, it has expanded operations to provide national coverage. For example,earlier this year it opened a purpose-built factory in Blackburn. Lancashire, serving the north of the country in what can be a fairly parochial market sector. Additional Thompsons-owned service centres in Loughborough — also incorporating an agency for Binotto tipping gear—and Wigan fill in the gaps for aftersales support. backed by another three third-party service providers Charlton acquisition

However, the greatest single expansion to theThompsons empire came in 2003 with the acquisition of the Dover-based Charlton business. If the Thompsons brand is best known for its products at the heavier-duty end of the market, exemplified by the Loadmaster. Charlton's reputation has been built on the SuperLite and related bodies which, as the name suggests, appeal to the other end of the sector.The Dover operation' recently built premises include a pair of low-bake ovens, which hand the paintwork for Croydon-built Thompsons bodies, as well as its tit; It also fits Palfinger lorry-mounted cranes in-house at New Addingt( and a £400,000 laser cutting machine demonstratesThompsons' willingness to invest in product improvement.

The Thom psons philosophy is based on the belief that there are enough quality-conscious customers prepared to pay for a top-end product. And the Burtons make no apologies for the fact that they sc the most expensive product on the market; you cod buy a tipper that will do the same job initially fora less.The fact is that they build 40 uni week.90`)/0 of which are steel bodies six and eight-wheelers, which accout for around half of the total market. So the company's approach can't be too far adrift further proof were needed, the list of chassis manufacturers offering Thom psons bodies or one-stop basis includes Iveco. MAN, Scania a Volvo, while its customer base reads like a directory of tipper operators from PJ Brown in Sussex to Yuill and Dodds in Lanarkshire. It even has three bodies operating on Shetlan

The Loadmaster X-tra, with its signature horizontal crease along the body side, has been key to the firm's success for more than a decade a a half, but today's body is a far cry from the original product.

Back then, it was the norm to rebaly a tipper after every two years( muckaway work, but now operators demand a five-year life with a saleable product at the end.lhis is due partly to improved design but, more significantly,the use of improved materials,such as the one-piec floor in high-strength Hardox 250 steel.The Loadmaster Lite saves so 300kg over the X-tra, while the curved-side Multimaster and corrugat side Stonemaster complete the medium-duty range.The Sandmaster an aluminium aggregates body, based on the steel Loadmaster design It isn't all big stuff. though. Bodies are provided for 3.5-tonners,suc as the Transit, while the 7.5-tonne sector also provides a fair amount volume.The Charlton wing continues to flourish as a specialist busint producing a wide range of products from plant refuelling and service units to military troop carriers.

The current trend towards keeping the driver safely in his seat on-s is largely catered for in-house.A newly designed, self-closing tailgate proving popular. and Thompsons makes its own automatic sheeting system. the Covermaster.The other legislative issue looming is whole vehicle type approval,some thing whichThompsons,along with most the better manufacturers, looks forward to with relish.Allan Burton says: It will clean up the industry, and it needs it."

No company can survive by standing still, and there's a limit to how much penetration you can make with a fixed product range, however good it is.That's whyThompsons has a couple of new lines waiting in I wings: one is an off-the-shelf body for the Daf LF45 7.5-tonner,and ti second will be its first major move into the tipping trailer market as a sales agent for a third-party product. Although the Burtons are keepi details close to their chests, they confirm it will heat the premiumquality end of the market rather than a low-cost Eastern European product. Whatever the future holds for the group, it shows no sign of falling into the classic traps of growing too quickly or of chasing volun at the expense of profit. •