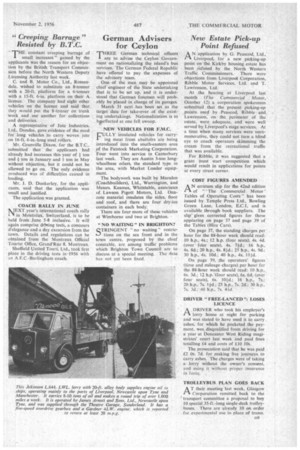 Page 49, 2nd November 1956 — German Advisers for Ceylon
Close
Noticed an error?
If you've noticed an error in this article please click here to report it so we can fix it.

THREE German technical officers are to advise the Ceylon Government on nationalizing the island's bus services. The German Federal Republic have offered to pay the expenses of the advisory team.

One of the men may be appointed chief engineer of the State undertaking that is to be set up, and it is understood that German foremen will probably be placed in charge of its garages.

March 31 next has been set as the target date for take-over of the existing undertakings. Nationalization is to bpeffected at one fell swoop.

NEW VEHICLES FOR F.M.C. E'ULLY insulated vehicles for carry ing meat from abattoirs are being introduced into the south-eastern area pf the Fatstock Marketing Corporation. Four went into service in Canterbury last week. They are Austin 3-ton longwheelbase oilers, the standard type in the area, with Market Loader equipment.

The bodywork was built by Marsden (Coachbuilders), Ltd., Warrington, and Messrs. Keames, Whitstable, associates of Lawson Pigott Motors, Ltd. Onazote material insulates the sides, floor and roof, and there are four dry-ice containers in each body.

There are four more of these vehicles at Wimborne and two at Brighton.

"NO WAITING" IN BRIGHTON? QTRINGENT "no. waiting" restricNJ tions on the sea front and in the town centre, proyosed by the chief constable, arc among traffic problems which Brighton Town Council are to discuss at a special meeting. The date has not yet been fixed.