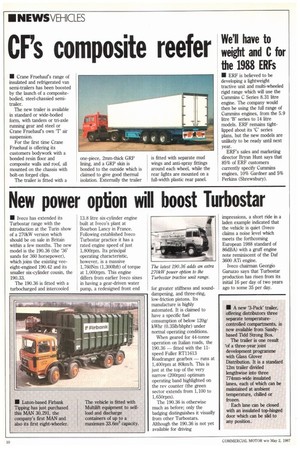 • lveco has extended its Turbostar range with the introduction at the Turin show of a 270kW version which should be on sale in Britain within a few months. The new model is the 190.36 (the '36' sands for 360 horsepower), which joins the existing veeeight-enfemed 190.42 and its smaller six-cylinder cousin, the 190.33.

The 190.36 is fitted with a turbocharged and intercooled 13.8 litre six-cylinder engine built at Iveco's plant at Bourbon Lancy in France. Following established Iveco Turbostar practice it has a rated engine speed of just 1,800rpm. Its principal operating characteristic, however, is a massive 1,760Nm (1,300Ibft) of torque at 1,000rpm. This engine differs from earlier Iveco sixes in having a gear-driven water pump, a redesigned front end for greater stiffness and sounddampening, and three-ring, low-friction pistons. Its manufacture is highly automated. It is claimed to have a specific fuel consumption of below 120g/ kWhr (0.35Ib/bhphr) under normal operating conditions.

The 190.36 is otherwise much as before; only the badging distinguishes it visually from other Turbostars. Although the 190.36 is not yet available for driving impressions, a short ride in a laden example indicated that the vehicle is quiet (Iveco claims a noise level which meets the forthcoming European 1988 standard of 86dBA) with a gruff engine note reminiscent of the Daf 3600 ATi engine.

Iveco chairman Georgio Garuzzo says that Turbostar production has risen from its initial 16 per day of two years ago to some 35 per day.