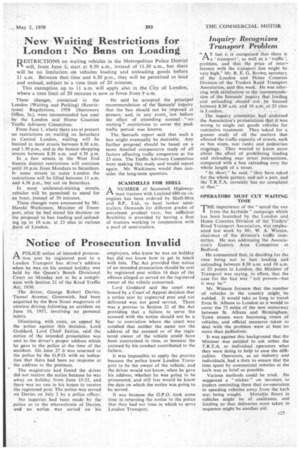 A POLICE notice of intended prosecu

tion sent by registered post to a London Transport bus driver's address when he was on his annual holiday was held by the Queen's Bench Divisional Court on Monday not to be a compliance with Section 21 of the Road Traffic Act, 1930.

The driver, George Robert Davies, Tunnel Avenue, Greenwich, had been acquitted by the Bow Street magistrate of careless driving following an accident on June 10, 1957, involving no personal injury.

Dismissing, with costs, an appeal by the police against this decision. Lord Goddard, Lord Chief Justice, said the notice of the intended prosecution was sent to the driver's proper address which he gave to the police at the time of the accident. On June 27 it was returned to the police by the G.P.O. with an indication that there had been no response at the address to the postman.

The magistrate had found the driver did not receive the notice because he was away on holiday from June 15-22, and there was no one in his house to receive the registered post. The notice was served on Davies on July 2 by a police officer.

No inquiries had been made by the police as to the whereabouts of Davies, and no notice. was served on his employers, who knew he was on holiday but did not know how to get in touch with him. The Act provided that notice of an intended prosecution should be sent by registered post within 14 days of the offence alleged or served on the registered owner of the vehicle concerned.

Lord Goddard said the court was bound by a Court of Appeal decision that a notice sent by registered post and not delivered was not good service. There was a proviso to Section 21 of the Act providing that a failure to serve the accused with the notice should not be a bar to conviction where the court was satisfied that neither the name nor the address of the accused or of the registered owner of the vehicle could have been ascertained in time, or because the accused by his conduct contributed to the failure, It was impossible to apply the proviso because the police knew London Transport to be the owner of the vehicle, and the driver would not know, when he gave his address, whether he was going to be prosecuted, and still less would he know the date on which the notice was going to be served.

It was because the G.P.O. took some time in returning the notice to the pOlice that they had not time in which to serve London Transport.