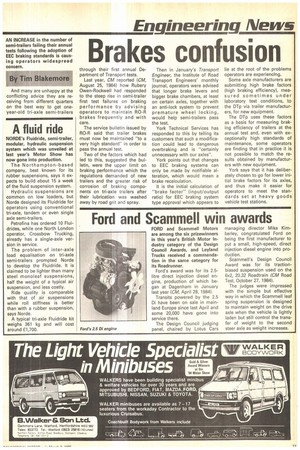 The Northampton-based company, best known for its rubber suspensions, says it expects to build about 15 a week of the fluid suspension system.

Hydraulic suspensions are common on low loaders, but Norde designed its Fluidride for operators using conventional tri-axle, tandem or even single axle semi-trailers.

Petrofina has ordered 10 Fluidrides, while one North London operator, Crossbow Trucking, already has a single-axle version in service.

The problem of inter-axle load equalisation on tri-axle semi-trailers prompted Norde to develop the Fluidride. It is claimed to be lighter than many steel monoleaf suspensions, half the weight of a typical air suspension, and less costly.

Ride quality is comparable with that of air suspensions while roll stiffness is better than with a rubber suspension, says Norde.

A typical tri-axle Fluidride kit weighs 361 kg and will cost around £1,700. through their first annual Department of Transport tests.

The service bulletin issued by RO-R said that trailer brakes must now be maintained "to a very high standard" in order to pass the annual test.

Two of the factors which had led to this, suggested the bulletin, were the upper limit on braking performance which the regulations demanded of new trailers and the greater risk of corrosion of braking components on tri-axle trailers after their lubrication was washed away by road grit and spray. Then in January's Transport Engineer, the Institute of Road Transport Engineers' monthly journal, operators were advised that longer brake levers and bigger brake chambers, at least on certain axles, together with an anti-lock system to prevent premature wheel locking, would help semi-trailers pass the test.

York Technical Services has responded to this by telling its customers that such a modification could lead to dangerous overbraking and is "certainly unnecessary with our axles".

York points out that changes to EEC braking systems can only be made by notifiable alteration, which would mean a brake recalculation.

It is the initial calculation of "brake factor" (input/output ratio) for EEC braking system type approval which appears to lie at the root of the problems operators are experiencing.

The DTp uses these factors as a basis for measuring braking efficiency of trailers at the annual test and, even with exceptionally high standards of maintenance, some operators are finding that in practice it is not possible to match the results obtained by manufacturers with new equipment.

York says that it has deliberately chosen to go for lower initial brake factors for its axles, and thus make it easier for operators to meet the standards set at heavy goods vehicle test stations.