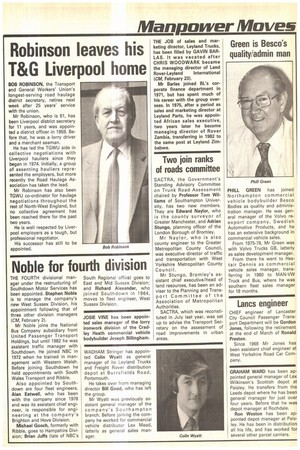 Page 15, 2nd March 1985 — Noble for fourth division
Close
Noticed an error?
If you've noticed an error in this article please click here to report it so we can fix it.
Keywords : Business / Finance

THE FOURTH divisional manager under the restructuring of Southdown Motor Services has been appointed. Stephen Noble is to manage the company's new West Sussex Division, his appointment following that of three other division managers (CM, February 2).

Mr Noble joins the National Bus Company subsidiary from United Passenger Transport Holdings, but until 1982 he was assistant traffic manager with Southdown. He joined NBC in 1972 when he trained in management with Western Welsh. Before joining Southdown he held appointments with South Wales Transport and Ribble.

Also appointed by Southdown are four fleet engineers. Alan Eatwell, who has been with the company since 1978 and was its assistant chief engineer, is responsible for engineering at the company's Brighton and Hove Division.