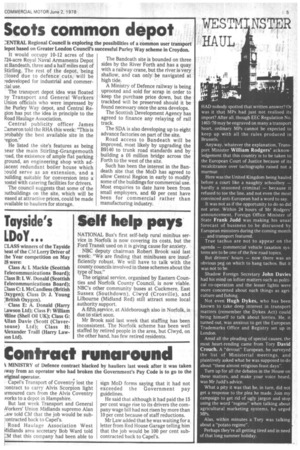 HAD nobody spotted that written answer? Or was it that MPs had just not realised its import? After all, though EEC Regulation No. 1463/70 may be engraved on many a transport heart, ordinary MPs cannot be expected to keep up with all the rules produced in Brussels.

ledgement that this country is to be taken to the European Court of Justice because of its recalcitrance over tachographs raised not a murmur.

Here was the United Kingdom being hauled before a court like a naughty schoolboy — hardly a seasoned criminal — because it refused to toe the line, and not even the most convinced anti-European had a word to say.

It was not as if the opportunity to do so did not arise. Within 24 hours of Mr Rodgers'

announcement, Foreign Office Minister of State Frank Judd was making his usual forecast of business to be discussed by European ministers during the coming month ... and transport featured.

True tachos are not to appear on the agenda — commercial vehicle taxation systems are to be one of the few road topics.

But drivers' hours — now there was an obvious peg on which to hang tachos. But it was not to be.

cal co-operation and the lesser lights were more concerned about such things as agriculture and fishing.

Not even Hugh Dykes, who has been known to take deep interest in transport

matters (remember the Dykes Act) could bring himself to talk about lorries. He, it turned out, was anxious to get the European Trademarks Office and Registry set up in London.

Amid all the pleading of special causes, the most heart-rending came from Tory David Crouch. A "devout" European, he surveyed the list of Ministerial meetings, and plaintively asked what he was supposed to do about "these almost religious feast days".

Turn up for all the debates in the House on these matters, and make your voice heard, was Mr Judd's advice.

What a pity it was that he, in turn, did not get a response to the plea he made. Join my campaign to get rid of ugly jargon and stop using the word "regime" when talking about agricultural marketing systems, he urged MPs.

Alas, within minutes a Tory was talking about a "potato regime".

Perhaps they're all getting tired and in need of that long summer holiday.