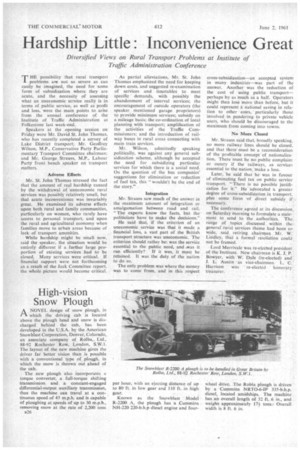 Page 60, 2nd June 1961 — High-vision Snow Plough
Close
Noticed an error?
If you've noticed an error in this article please click here to report it so we can fix it.

riA NOVEL design of snow plough, in which the driving cab is located above the plough head and snow is discharged behind the cab, has been developed in the U.S.A. by the American Snowblast Corporation, Denver, Colorado, an associate company of Rolba, Ltd., 88-92 Rochester Row, London, S.W.1. The layout of the new machine gives the driver far better vision than is possible with a conventional type of plough. in which the snow is thrown out ahead of the cab.

The new plough also incorporates a torque converter, a full-torque shifting transmission and a constant-engaged differential-output auxiliary transmission, thus the machine can travel at a continuous speed of 45 m.p.h. and is capable of ploughing at speeds of up to 30 m.p.h., removing snow at the rate of 2,200 tons

wheel drive. The Robla plough is driven by a Cummins NRT0-6-IP 335-b.h.p. diesel, located amidships. The machine has an overall length of 32 ft. 6 in., and weighs approximately 17-I tons.Overall width is 8 ft. 6 in.