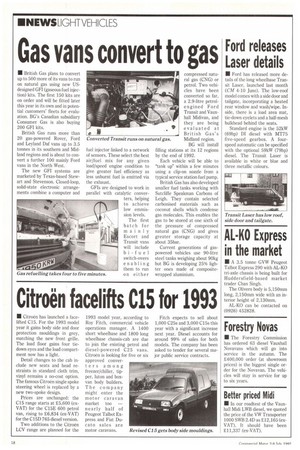 Page 20, 2nd July 1992 — Gas vans convert to gas iFoasrderredleetaasiless
Close
Noticed an error?
If you've noticed an error in this article please click here to report it so we can fix it.

• British Gas plans to convert up co 500 more of its vans to run on natural gas using new USdesigned GFI (gaseous fuel injection) kits. The first 150 kits are on order and will be fitted later this year in its own and in potential customers' fleets for evaluation. BG's Canadian subsidiary Consumer Gas is also buying 200 GFI kits.

British Gas runs more than 20 gas-powered Rover, Ford and Leyland Daf vans up to 3.5 tonnes in its southern and Midland regions and is about to convert a further 100 mainly Ford vans in the North West.

The new GFI systems are marketed by Texas-based Stewart and Stevenson. Closed-loop, solid-state electronic arrangements combine a computer and fuel injector linked to a network of sensors. These select the best air/fuel mix for any given load/speed engine condition to give greater fuel efficiency as less unburnt fuel is emitted via the exhaust.

GFIs are designed to work in parallel with catalytic converters, helping to achieve low emmission levels.

The first batch for mainly Escort and Transit vans will include bi-fuel switch-overs enabling them to run on either compressed natural gas (CNG) or petrol. Two vehicles have been converted so far, a 2.9-litre petrolengined Ford Transit and Vauxhall Midivan, and they are being evaluated at British Gas's Midland region.

BG will install filling stations at its 12 regions by the end of 1992.

Each vehicle will be able to "tank up" within a few minutes using a clip-on nozzle from a typical service station fuel pump.

British Gas has also developed smaller fuel tanks working with Sutcliffe Spealunan Carbons of Leigh. They contain selected carbonised materials such as coconut shells which condense gas molecules. This enables the gas to be stored at one sixth of the pressure of compressed natural gas (CNG) and gives greater storage capacity at about 35bar.

Current generations of gaspowered vehicles use 90-litre steel tanks weighing about 90kg but BG is developing 25% lighter ones made of compositewrapped aluminium.

• Ford has released more details of the long wheelbase Transit Laser, launched last month (CM 4-10 June). The low-roof model comes with a side door and tailgate, incorporating a heated rear window and wash/wipe. Inside, there is a load area mat, tie-down eyelets and a half-mesh bulkhead behind the seats.

Standard engine is the 52kW (69hp) DI diesel with MT75 five-speed gearbox. A fourspeed automatic can be specified with the optional 59kW (79hp) diesel. The Transit Laser is available in white or blue and three metallic colours.