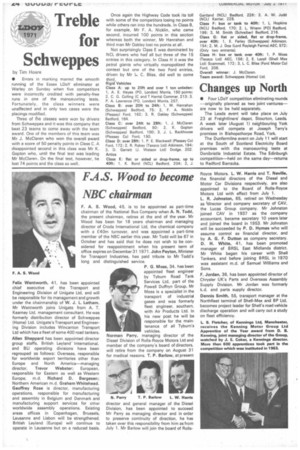 Felix Wentworth, 41, has been appointed chief executive of the Transport and Engineering Division of Unigate Ltd, and will be responsible for its management and growth under the chairmanship of W. J. L. Latham. Mr Wentworth joins Unigate from A. T. Kearney Ltd, management consultant. He was formerly distribution director of Schweppes (Home) Ltd. Unigate's Transport and Engineering Division includes Wincanton Transport Ltd which has a fleet of some 400 road tankers.

Allen Sheppard has been appointed director group staffs, British Leyland' International. and BLI operating divisions have been regrouped as follows: Overseas, responsible for worldwide export territories other than Europe and North America—managing director, Trevor Webster; European, responsible for Eastern as well as Western Europe, m.d. Richard D. Bergesen; Northern American m.d. Graham Whitehead. Geoffrey Rose is director, manufacturing operations, responsible for manufacturing and assembly in Belgium and Denmark and manufacturing support services for other worldwide assembly operations. Existing areas offices in Copenhagen, Brussels, Lausanne and Lisbon will be strengthened. British Leyland (Europe) will continue to operate in Lausanne but on a reduced basis. F. A. S. Wood, 45, is to be appointed as part-time chairman of the National Bus Company when A. N. Todd. the present chairman, retires at the end of the year. Mr Wood has been for 18 years chairman and managing director of Croda International Ltd, the chemical company with a C40m turnover, and was appointed a part-time member of the NBC earlier this year. Mr Todd will be 67 in October and has said that he does not wish to be considered for reappointment when his present term of office expires on December 31 1971. John Peyton, Minister for Transport Industries, has paid tribute to Mr Todd's long and distinguished service.

P. G. Moss, 34. has been appointed fleet engineer by Tyburn Road Tank Services Ltd. part of the Powell Duffryn Group. Mr Moss is a specialist in the transport of industrial gases and was formerly fleet engineer, southern, with Air Products Ltd. In his new post he will be responsible for the maintenance of all Tyburn's vehicles.

Norman Parry, managing director of the Diesel Division of Rolls-Royce Motors Ltd and member of the company's board of directors, will retire from the company on August 31 for medical reasons. T. P. Barlow, at present director and general manager of the Diesel Division, has been appointed to succeed Mr Parry as managing director and in order to preserve continuity of direction, he has taken over this responsibility from him as from July 1. Mr Barlow will join the board of Rolls Royce Motors, L. W. Harris and T. Neville, the financial directors of the Diesel and Motor Car Divisions respectively, are also appointed to the Board of Rolls-Royce Motors Ltd with effect from July 1.

L. R. Johnston, 65, retired on Wednesday as )director and company secretary of CAV, the Lucas Group company. Mr Johnston joined CAV in 1937 as the company accountant, became secretary 10 years later and joined the board in 1953. Mr Johnston will be succeeded by P. D. Hyrnas who will assume control as financial director, and by A. G. F. Dutton as company secretary. D. H. White, 41, has been promoted manager of BRSL East Midlands district. Mr White began his career with Shell Tankers, and before joining BRSL in 1970 was assistant m.d. of Samuel Williams and Sons.

Dennis Smith, 55, transport manager at the Northfleet terminal of Shell-Mex and BP Ltd. becomes project leader for Shell's road vehicle discharge operation and will carry out a study on fleet efficiency.