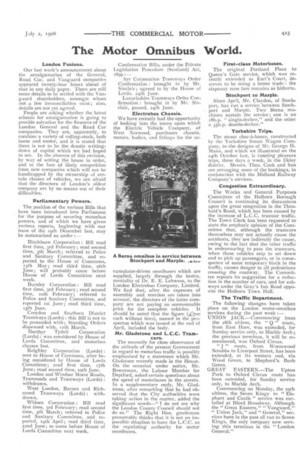 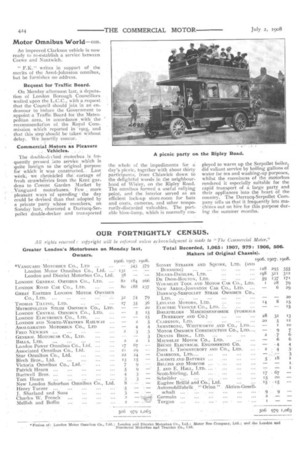 Our last week's announcement about the amalgamation of the General, Road Car, and Vanguard companies appeared twenty-four hours ahead of that in any daily paper. There are still some details to be settled with the Vanguard shareholders, amongst whom not a few irreconcilables exist; also, details are not yet agreed.

People are asking whether the latest scheme for amalgamation is going to provide salvation for the finances of the London General and the Road Car companies. They are, apparently, to combine a variety of rolling-stock, both horse and motor, and it is stated that there is not to be the drastic writingdown of capital which we had hoped to see. In the absence of this revision, by way of setting the house in order, and in the face of likely competition from new companies which will not be handicapped by the ownership of certain classes of vehicles, we are afraid that the directors of London's oldest company are by no means out of their difficulties.

The position of the various Bills that have been introduced into Parliament for the purpose of securing motorbus powers, and of which we have given various reports, beginning with our issue of the t9th December last, may be summarised as under ;— Blackburn Corporation : Bill read first time, 3rd February ; read second time, 5th March; referred to Police and Sanitary Committee, and re-. ported to the house of Commons, 13th May ; read third time, 26th June; will probably come before House of Lords Committee next week.

Croydon and Southern District Tramways (Lords) : this Bill is not to be proceeded with ; Standing Orders dispensed with, 12th March.

We have recently had the opportunity of looking into the terms upon which the Electric Vehicle Company, of West Norwood, purchases chassis, motors, bodies, and fittings for the ac

cumulator-driven omnibuses which are supplied, largely through the instru_ mentality of Dr. E. E. Lehwess, to the London Electrobus Company, Limited. We find that, after the expenses of assembly and erection are taken into account, the directors of the latter company are not paying an unreasonable price for the complete vehicles. It should be noted that the figure (4.7oo each without tires), named in the prospectus which was issued at the end of April, included the body.

The necessity for close observance of the attitude of the present Government in regard to motorbus traffic is possibly emphasised by a statement which Mr. Gladstone recently made in the House. On the occasion under notice, Mr. Bowerman, the Labour Member for Deptford, asked certain questions about the speed of motorbuses in the streets. In a supplementary reply, Mr. Gladstone, after remarking that he had observed that the City authorities were taking action in the matter, added the significant words—" I do not see why the London County Council should not do so." The Right Hon. gentleman presumably thinks that it is not an impossible situation to have the L.C.C. as the regulating authority for motor omnibuses.

The original Portland Place to. Queen's Gate service, which was recent13..• extended to Earl's Court, deserves to be doing a better trade : the sixpenny zone fare remains as hitherto.

Since April, Mr. Claydon, of Stockport, has run a service between Stockport and Marple. Two Berna machines sustain the service; one is an 18h.p. " single-decker," and the other a 35h.p. double-decker."

The steam char4-bancs, constructed by the Yorkshire Steam Wagon Company, to the designs of Mr. George H. Mann, and which we illustrated on the 24th October last, is running pleasure trips, three days a week, in the Ilkley district. Messrs. Thos. Cook and Son are arranging some of the bookings, in conjunction with the Midland Railway Company's services.

The Works and General Purposes Committee of the Holborn Borough Council is continuing its discussions upon the great congestion in the Theobald's Road, which has been caused by the increase of L.C.C. tramcar traffic. The Town Clerk has been requested to state the emphatic opinion of the Coininittee that, although the tramcars themselves may not actually cause the accidents, they are indirectly the cause, owing to the fact that the other traffic in endeavouring to pass the tramcars, when these vehicles stop to set down and to pick up passengers, or in consequence of some temporary block in the traffic, causes danger to all pedestrians crossing the roadway. The Committee repeats its suggestion for a reduction in the number of cars, .and for subways under the Gray's Inn Road opposite the Holborn Town Hall.

The following changes have taken place on the London motor-omnibus services during the past week :— UNION JACK.—Commencing from the 28th ultimo, the " Q " route, from East Ham, was extended, for Sunday service only, to Marble Arch; the previous terminus, it will be remembered, was Oxford Circus.

" J " route, from Wormwood Scrubbs to Liverpool Street, has been extended, at its western end, via. Wood Green, to Shepherd's Bush Green.

Commencing on Monday, the 29th ultimo, the Seven Kings to " Elephant and Castle " service was curtailed at Ilford Broadway. Although. the " Great Eastern," " Vanguard,' " Union Jack," and" General," services have in the past all run to Seven Kings, the only company now serving this terminus is the " London General." An improved Clarkson vehicle is now ready to re-establish a service between Crewe and Nantwich. " FR.'' writes in support of the merits of the Arrol-Johnston omnibus, but he furnishes no address.

Request for Traffic Board.

On Monday afternoon last, a deputation of London Borough Councillors waited upon the L.C.C., with a request that the Council should join in an endeavour to induce the Government to appoint .a Traffic Board for the Metropolitan area, in accordance . with the recommendation of the Royal Commission which -reported in 19o5, and that this step._shouId be taken .without

The double-decked motorbus is frequently pressed into service which is quite foreign to the original purpose for which it Was constructed.. Last week; we chrdnicled the cartage of fresh strawbirries from the Kent 'gardens to Covent Garden Market by , Vanguard motorbuses: Few more pleasant ways of spending the day could be deviSed than that adopted by a private party 'whose members; on Sunda..y last,' chartered a Darracq-Serpollet double-decker and transported the whole of the impedimenta for a day's picnic, together with about thirty participants, from Chiswick down to the delightful woods in the neighbourhood of Wisley, on the Ripley Road. The omnibus formed a useful rallying point, and the interior served as an efficient lock-gip store-room for hats and coats, cameras, and other temporarily-discarded valuables. The portable blow-lamp, which is normally em7 ployed to warm up the Serpollet boiler, did valiant service by boiling gallons of water for tea and washing-up purposes, whilst the roominess of the motorbus rendered it especially suitable for the rapid transport of a large party and their appliance's into the heart of the country. The Darracq-Serpollet Company tells us that it frequently lets machines out on hire for this purpose during the summer months.