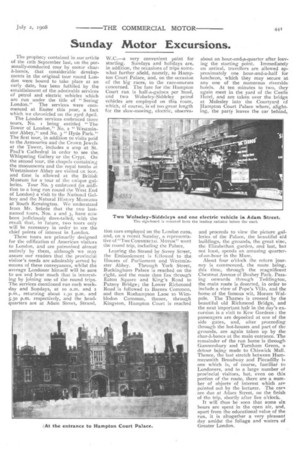 Page 29, 2nd July 1908 — Sunday Motor Excursions.
Close
Noticed an error?
If you've noticed an error in this article please click here to report it so we can fix it.
Keywords : Transport In London, London, The Original Tour, River Thames, City Of Westminster, Chiswick, Hospitality / Recreation

The prophecy contained in our article of the 12th September last, on the personally-conducted tour by motor charA-banes, that considerable developments in the original tour round London were bound to take place at an early date, has been fulfilled by the establishment of the admirable services of petrol and electric vehicles which are run under the title of "Seeing London." The services were commenced at Easter this year, a fact which we chronicled' on the 23rd April. The London services embraced three tours, No. i being entitled "The Tower of London," No. a "Westminster Abbey," and No. 3 " Hyde Park." The first tour, in addition to visits paid to the Armouries and the Crown Jewels at the Tower, includes a stop at St. Paul's Cathedral in order to see the, Whispering Gallery or the Crypt. On the second tour, the chapels containing the monuments and the royal tombs at Westminster Abbey are visited on foot, and time is allowed at the British Museum for a tour of the unique galleries. Tour No. 3 embraced (in addition to a long run round the West End of London) a visit to the National Gallery and the Natural History Museums at South Kensington. We understand from Mr. Sebree that the two lastnamed tours, Nos. 2 and 3, have naw been judiciously dove-tailed, with the result that, in future, two tours only will be necessary in order to see the chief points of interest in London.

These tours are primarily designed for the edification of American visitors to London, and are patronised almost entirely by them, although we may assure our readers that the provincial visitor's needs are admirably served by means of these conveyances, whilst the average Londoner himself will be sure to see and hear much that is interesting by joining one of the round trips. The services mentioned run each weekday and Sundays, at to a.m. and 2 p.m., returning about 1.30 p.m. and 5.30 p.m. respectively, and the headquarters are at Adam Street, Strand, W.C.—a very convenient point for starting. Sundays and holidays are, in addition, the occasions of trips somewhat further afield, namely, to Hampton Court Palace, and, on the occasion of the big races, to the race-courses concerned. The fare for the Hampton Court run is half-a-guinea per head, and two Wolseley-Siddeley petrol vehicles are employed on this route, which, of course, is of too great length for the slow-moving, electric, observa

tion cars employed on the London runs, and, on a recent Sunday, a representative of "THE COMMERCIAL MOTOR" went the round trip, including the Palace.

Leaving the Strand by Savoy Street, the Embankment is followed to the Houses of Parliament and Westminster Abbey. Through York Street, Buckingham Palace is reached on the right, and the route then lies through Eaton Square and King's Road to Putney Bridge; the Lower Richmond Road is followed to Barnes Common, and then Roehampton Lane to Wimbledon Common, thence, through Kingston, Hampton Court is reached about an hour-and-a-quarter after leaving the starting point. Immediately on arrival, travellers are allowed approximately one hour-and-a-half for luncheon, which they may secure at any one of the numerous riverside hotels. At ten minutes to two, they again meet in the yard of the Castle Hotel, and are taken over the bridge at Molesley into the Courtyard of Hampton Court Palace where, alight., mg, the party leaves the car behind, and proceeds to view the picture galleries of the Palace, the beautiful old buildings, the grounds, the great vine, the Elizabethan garden, and last, but not least, spends an amusing quarterof-an-hour in the Maze.

About four o'clock the return journey is commenced, the route being, this time, through the magnificent Chestnut Avenue of Bushey Park. Passing onwards through Teddington, the main route is deserted, in order to include a view of Pope's Villa, and the home of the famous wit, Horace Walpole. The Thames is crossed by the beautiful old Richmond Bridge, and the next important halt in the day's excursion is a visit to Kew Gardens : the passengers are deposited at one of the side gates, and, after proceeding through the hot-houses and part of the grounds, are again taken up by the char-a-bancs at the main entrance. The remainder of the run home is through Gunnersbury and Turnham Green, a detour being made to Chiswick Mall. Thence, die last stretch between Hammersmith Broadway and Piccadilly is one which is, of course, familiar to Londoners, and to a large number of provincial visitors, but, even on this portion of the route, there are a number of objects of interest which are pointed out by the lecturer. The cars are due at Adam Street, on the finish of the trip, shortly after five o'clock. It will thus be seen that some six hours are spent in the open air, and, apart from the educational value of the run, it is altogether a very pleasant day amidst the foliage and waters of Greater London.