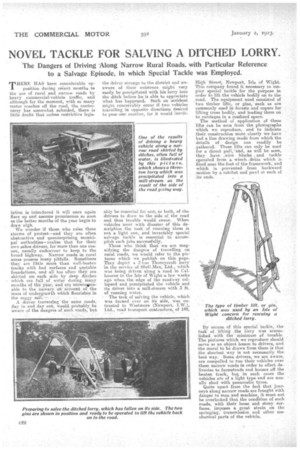 Page 8, 2nd January 1923 — NOVEL TACKLE FOR SALVING A DITCHED LORRY.
Close
Noticed an error?
If you've noticed an error in this article please click here to report it so we can fix it.

The Dangers of Driving Along Narrow Rural Roads, with Particular Reference to a Salvage Episode, in which Special Tackle was Employed.

THERE HAS been considerable opposition during reeent months to the use of rural and narrow roads by heavy commercial-vehicle traffic, and although for the moment, with so many motor coaches off the road, the controversy has somewhat subsided, there is little doubt that unless restrictive leg,is

lation is introduced it will once again flare up and assume prominence so soon as the better months of the year begin to draw nigh. We wonder if those who raise these storms of protest—and they are often obstructive and unenterprising municipal authorities-realise that for their own sakes drivers, for more than one reason, usually endeavour to keep to the broad highway. Narrow roads in rural areas possess many pitfalls. Sometimes they are little more than well-beaten tracks with bad surfaces and unstable foundations, and all too often they are skirted on each side by deep ditches which are full of water during Many months of the Year; and are unrecolinisable to the Unwary on a.cconnt of the mass of undergrowth which flourishes in the soggy soil: A driver traversing the same roads, day in and day out, would .probably be aware of the dangers of, such roads, but the driver strange to the district and unaware of their existence might very easily be precipitated with his lorry into the ditch before he is able to appreciate what has happened. Such an accident might conceivably occur if two vehicles travelling in opposite directions desired to pass one another, for it would inevit

ably be essential for one, or both, of the drivers to draw to the side of the road and thus trouble would, ensue. When vehicles meet with disaster of this description the task of rescuing them is not a light one, and invariably special salvage tackle is essential to accomplish such jobs successfully. Those svho think that we are magnifying the dangers of travelling on rural roads, we would refer to the pictures which we publish on this page. They depict a 2-tort Thornycroft lorry in the service of Shell-Mex, Ltd., which was being driven along a road in Calbourne in the Isle of Wight a few weeks ago when the edge of the roadway collapsed and precipitated the vehicle and its driver into a mill-stream with 3 ft. of running water.

The task of salving the vehicle, which was turned over on its side, was entrusted to Wetmore (Newport, LW.), Ltd., road transport contractors, of 149, High Street, Newport, Isle of Wight. This company found it necessary to employ special tackle for the purpose in order to lift the vehicle bodily on to the road. The equipment used consisted of two timber lifts, or gins, such as are commonly used in forests and copses for lifting trees bodily, and loading them on to carriages in a confined space. The method of application of these lifts can be seen from the photographs which we reproduce, and to indicate their construction more clearly we have had a line drawing made from which the details of design can readily be gathered. These lifts can only be used for a direct poll, 'and, as will be seen, they have .wire blocks , and tackle operated from a winch drum which is fixed near the foot of the framework, and which is prevented from backward motion by a ratchet and pawl at each of its ends.

Ity means of this special tackle, the task of lifting the lorry was accontlished with the minimum Df trouble The pictures which we reproduce should serve as an object lesson to drivers, and the moral to be drawn from them is that the shortest Way is not necessarily the best way. Some drivers, we are aware, are compelled to run their vehicles over these narrow roads in order to effect deliveries to farmsteads and houses off the beaten track, but, in such cases the vehicles are of a light type and are usually shod with pneumatic tyres. Quite apart. from the fact that journeys along narrow roads are fraught with danger to man and machine, it must not be overlooked that the condition of such roads, with their loose and stony surfaces, imposes a great strain on the springing, transmission and other mechanical parts of the vehicle.