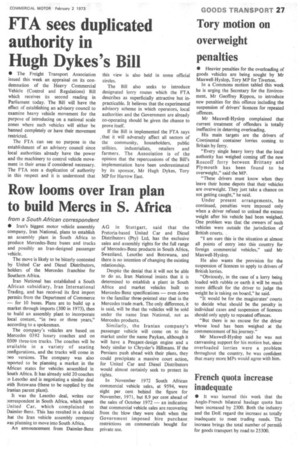 Page 29, 2nd February 1973 — FTA sees duplicated authority in Hugh Dykes's Bill
Close
Noticed an error?
If you've noticed an error in this article please click here to report it so we can fix it.
Keywords : Politics

• The Freight Transport Association issued this week an appraisal on its condemnation of the Heavy Commercial Vehicle (Control and Regulations) Bill which receives its second reading in Parliament today. The Bill will have the effect of establishing an advisory council to examine heavy vehicle movement for the purpose of introducing on a national scale zones where such vehicles will either be banned completely or have their movement restricted.

The FTA can see no purpose in the establishment of an advisory council since local authorities already have the power and the machinery to control vehicle movement in their areas if considered necessary. The FTA sees a duplication of authority in this respect and it is understood that this view is also held in some official circles.

The Bill also seeks to introduce designated lorry routes which the FTA describes as superficially attractive but inpracticable. It believes that the experimental advisory scheme in which operators, local authorities and the Government are already co-operating should be given the chance to prove itself.

If the Bill is implemented the FTA says • that it will adversely affect all sectors of the community, householders, public utilities, industrialists, retailers and farmers. The Association is of the opinion that the repercussions of the Bill's implementation have been underestimated by its sponsor, Mr Hugh Dykes, Tory MP for Harrow East.