Driver claimed he had to speed 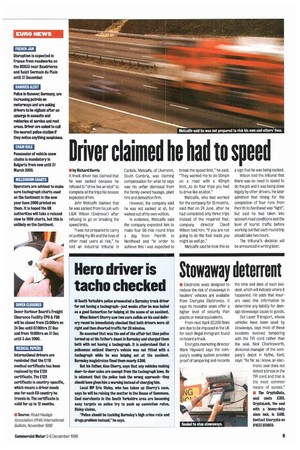 Page 11, 2nd December 1999 — Driver claimed he had to speed
Close
Noticed an error?
If you've noticed an error in this article please click here to report it so we can fix it.
Keywords : Traffic Law, Metcalfe, Speed Limit, Truck Driver, Nenthead

• by Richard Harris A truck driver has claimed that he was sacked because he refused to "drive like an idiot" to complete all the trips his bosses expected of him.

John Metcalfe claimed that he was sacked from his job with L&W Wilson (Endmoor) after refusing to go on breaking the speed limits.

"I was not prepared to carry on putting my life and the lives of other road users at risk," he told an industrial tribunal in Carlisle. Metcalfe, of Ulverston, South Cumbria, was claiming compensation for what he says was his unfair dismissal from the family-owned haulage, plant hire and demolition firm.

However, the company said he was not sacked at all, but walked out of his own volition.

In evidence, Metcalfe said the company expected him to make four 66-mile round trips a day from Penrith to Nenthead and "in order to achieve this I was expected to break the speed limit," he said. "They wanted me to do 55mph on a road with a 40mph limit...to do four trips you had to drive like an idiot."

Metcalfe, who had worked for the company for 15 months, said that on 24 June, after he had completed only three trips instead of the required four, company director David Wilson told him: "If you are not going to do the four loads you might as well go."

Metcalfe said he took this as a sign that he was being sacked.

Wilson told the tribunal that there was no need to speed to do the job and it was being done legally by other drivers. He later admitted that timing for the completion of four runs from Penrith to Nenthead was light", but said he had taken into account road conditions and the level of tourist traffic before working out that each round trip should take two hours.

The tribunal's decision will be announced in writing later.