Transport Problems of the Empire 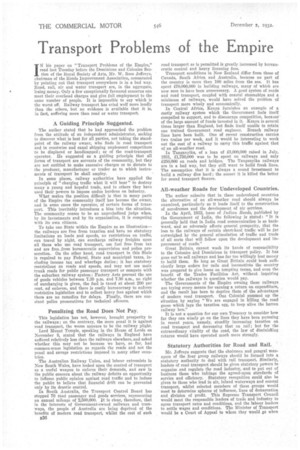 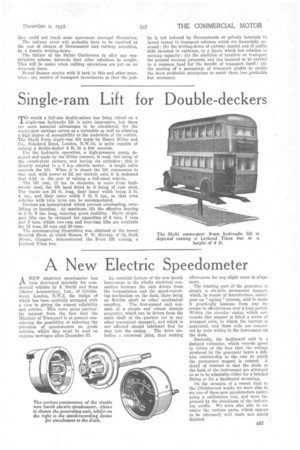 Page 54, 2nd December 1932 — Transport Problems of the Empire
Close
Noticed an error?
If you've noticed an error in this article please click here to report it so we can fix it.
Keywords :

IN his paper on "Transport Problems of the Empire," read last Tuesday before the Dominions and Colonies Section of the Royal Society of Arts, Mr. W. Rees Jeffreys, chairman of the Roads Improvement Association, commenced by pointing out that transport everywhere is in a bad way. Road, rail, air and water transport are, in the aggregate, losing money. Only a few exceptionally favoured concerns can meet their overhead charges and give full employment to the same number of people. It is impossible to say which is the worst off. Railway transport has cried wolf more loudly than the others, but no evidence is available that it is, in fact, suffering more than road or water transport.

The author stated that he had approached the problem from the attitude of an independent administrator, seeking to discover what is best for all parties, not taking the standpoint of the railway owner, who finds in read transport and in coastwise and canal shipping unpleasant competitors to be displaced or handicapped ; or of the road-transport operator. Ile suggested as a guiding principle that all forms of transport are servants of the community, but they are not entitled to make excessive charges or to dictate to the producer, manufacturer or trader as to which instruments of transport he shall employ.

In some places, railway authorities have applied the principle of "charging traffic what it will bear" to destroy many a young and hopeful trade, and in others they have used their powers to impose undue burdens on industry.

What makes the position difficult is that in many parts of the Empire the community itself has become the owner, and in some cases the operator, of certain forms of transport. This inevitably introduces a bias into the situation. The community ceases to be an unprejudiced judge when, by its investments and by its organization, it is competing with its own citizens.

To take one State within the Empire as an illustration—. the railways are free from taxation and have no statutory limitations on loads and speeds, no restrictions on traffic, can travel by night, can surcharge railway freights upon all those who use road transport, use fuel free from tax and are free from bureaucratic supervision and police prosecution. On the other hand, road transport in this State is required to pay Federal, State and municipal taxes, including income tax and wharfage duties; it has statutory restrictions on roads and speeds, and may not use main trunk roads for public passenger transport or compete with the suburban railway system ; Factory Acts prevent the use of goods vehicles between 7.30 p.m. and 7.30 a.m., no right of surcharging is given, the fuel is taxed at about 200 per cent, ad valorem, and there is costly bureaucracy to enforce restrictive legislation and to collect heavy fees against which there are no remedies for delays. Finally, there are constant police prosecutions for technical offences.

Penalizing the Road Does Not Pay.

This legislation has not, however, brought prosperity to the railways ; on the contrary, the more penal it is against road transport, the worse appears to be the railway plight.

Lord Mount Temple, speaking in the House of Lords on

ovember 8, stated that the railways in England have suffered relatively less than the railways elsewhere, and asked whether this may not be because we have, so far, had common-sense legislation as regards the roads and not the penal and savage restrictions imposed in many other countries.

The Australian Railway Union, and labour extremists in New South Wales, have looked upon the control of transport as a useful weapon to enforce their demands, and saw in the public concern about the railway deficits an opportunity to inflame public opinion against road traffic and to induce the public to believe that financial drift can be prevented only by its drastic controL In South Australia, the Transport Control Board has stopped 70 road passenger and goods services, representing an annual mileage of 2,500,000. It is clear, therefore, that in the interests of Government-owned railways and tramways, the people of Australia are being deprived of the benefits of modern road transport, whilst the cost of such B36 road transport as is permitted is greatly increased by bureaucratic control and heavy licensing fees.

Transport conditions in New Zealand differ from those of Canada, South Africa and Australia, because no part of the country is more than 100 miles from the sea. It has spent £70,000,000 in building railways, many of which are now seen to have been unnecessary. A good system of roads and road transport, coupled with coastal steamships and a minimum of railways, would have solved the problem of transport more wisely and economically.

In Central Africa, Kenya furnishes an example of a costly railway system which the Government feels itself compelled to support, and to discourage competition, because of the large amount of funds invested in it. -Kenya is several times larger than England, but finds itself unable to retain one trained Government road engineer. Branch railway lines have been built. One of recent construction carries two trains per week, and it would be interesting to work out the cost of a railway to carry this traffic against that of an all-weather road.

In Tanganyika, of a loan of £3,000,000 raised in July, 1931, 11,750,000 was to be spent on railways and only £250,000 on roads and bridges. The Tanganyika railways are in a bad way, but they still want to build fresh lines. The assumption that it is always a sound investment to build a railway dies bard; the sooner it is killed the better for sound transport finance.

The author submits that in these undeveloped countries the alternative of an all-weather road should always be examined, particularly as it lends itself to the construction of aerodromes and the development of air services.

In the April, 1932, issue of Indian Roads, published by the Government of India, the following is stated : "It is generally held that in India road communication is so backward, and so adversely affects general prosperity, that the loss to the railways of certain short-haul traffic will be far outweighed by the general stimulation of traffic and trade of all sorts that will follow upon the development and improvement of roads."

Great Britain, cannot wash its hands of responsibility to the Colonies and Dominions in transport policy. It has gone out'to sell railways and has far too willingly lent money to build them. So long as Great Britain could book sufficiently large orders for rails and locomotives the country was prepared to give loans on tempting terms, and even the benefit of the Trades Facilities Act, without inquiring whether the railways in question would pay.

The Governmentsof the Empire owning these railways are trying every means for earning a return on expenditure, and the result has been to deprive them of the advantages of modern road transport. One Colonial summed up the situation by saying "We are engaged in killing the road goose which lays the taxation egg, to keep alive the barren railway hen."

It is not a question for our own Treasury to consider how far they can wisely go on the lines they have been pursuing in recent years, namely, steadily increasing taxation on road transport and decreasing that on rail ; but for the extraordinary vitality of the road, the law of diminishing returns would have operated much more strongly.

Statutory Authorities for Road and Rail.

Mr. Jeffreys suggests that the chairmen and genqral managers of the four group railways should be formed into a statutory authority to deal with rail transport. Similarly, leaders of road transport should be given statutory powers to organize and regulate the road industry, and to put out of business those who infringe the agreed-upon standards of service and efficiency. Statutory recognition could also he given to those who lead in air, inland waterways and coastal transport, whilst selected members of these groups would meet to determine spheres of influence, lines of demarcation and division of profit. This Supreme Transport Council would meet the responsible leaders of trade and industry to agree transport rates and conditions, and the labour leaders to settle wages and conditions. The Minister of Transport would be a Court of Appeal to whom they would go when

they could not reach some agreement amongst themselves. The railway error will probably have to be repaired at the cost of owners of Government and railway securities, by a drastic writing-down.

The failure of the Salter Conference to offer any constructive scheme demands that other solutions be sought. This will be easier when railway operations are put on an economic basis.

Sound finance carries with it both in this and other countries: (a). control of transport investments so that the pub lie is not induced by Governments or private interests t3 invest money in transport schemes which are financially unsound ; (b) the writing-down of railway capital and of public debt invested in railways, to a figure which has relation to earning capacity ; (c) the abolition of taxation on transport for general revenue purposes, any tax imposed to be carried to a common fund for the benefit of transport itself ; (d) the pooling of a percentage of transport profits to enable the more profitable enterprises to assist those less profitable but necessary.