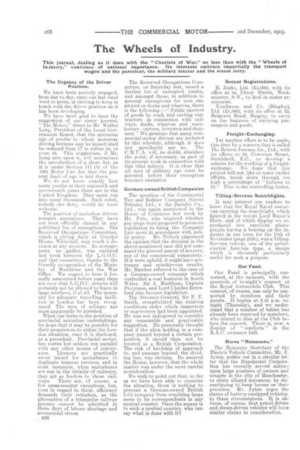 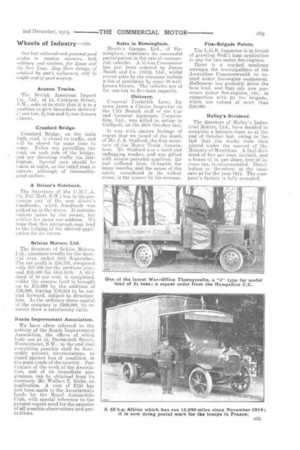 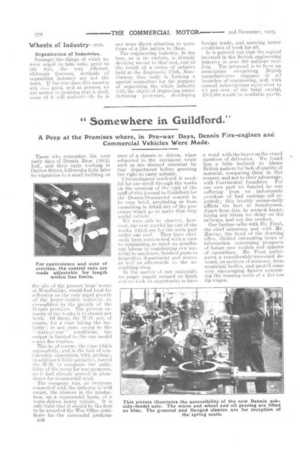 Page 8, 2nd December 1915 — The Wheels of Industry.
Close
Noticed an error?
If you've noticed an error in this article please click here to report it so we can fix it.
Keywords : Belsize Motors, Steam Wagon, Electric Vehicle, Ford Motor Company

This journal, dealing as it does with the "Chariots of War," no less than with the "Wheels of In.lustry," continues of national importance. Its interests embrace impartially the transport wagon and the parcelcar, the military tractor and the steam lorry.

The Urgency of the Driver Position.

We have been actively engaged, from day to day, since our last issue went to press, in striving to keep in touch with, the driver position as it has been developing.

We have been glad to hear the suggestion of our sister journal, "The Motor," direct to Mr. Walter Long, President of the Local Government Board, that the minimum age of youths to whom motorcar driving licences may be issued shall be reduced feom 17 to either 16, or even 15. This suggestion, if Mr. Long acts upon it, will necessitate the introduction of a short Act, as it is under Section HI (5) of the 1903 Motor Car Act that the present limit of age is laid down.

We do not know exactly how many youths in their sixteenth and seventeenth years there are in the United Kingdom. They must run into many thousands. Such relief, nobody can deny, would be most welcom e.

The position of motorbus drivers remains anomalous. They have not been officially classed in any published list of exemptions. The Reserved Occupations Committee, which is sitting daily at Gwydyr House, Whitehall, may reach a :decision at any moment. An arrange ment, we ":.gather, was outlined last week between the L.G.O.C. and that committee, thanks to the friendly co-operation of the Ministry of Munitions and the War Office. We expect to hear it formally announced before many days arc over that L.G.O. C. drivers will certainly not be allowed to leave in large numbers, if at all. The necessity for adequate travelling facilities in London has been recognized. The men of military age must apparently be attested.

When one turns to the position of provincial motorbus undertakings, we hope that it may be possible for their proprietors to utilize the London situation, once it is disclosed, as a precedent. Provincial motorbus routes but seldom run parallel with any other means of conveya,nce. Licences are practically never issued for motorbuses to duplicate tramcar services, and in most instances, when motorbuses are run in the vicinity of railways, they act as feeders to those rail

ways. There are, of course, a few cross-country exceptions, but, even in regard to these, efficiency demands their retention, as the alternative of a triangular railway journey cannot be admitted in these days of labour shortage and commercial stress.

/330 The Reserved Occupations Committee, on Saturday last, issued a further list of exempted trades, and amongst these, in addition to general exemptiOns for men employed on docks and wharves, there is the following :--" Public carriers of goods by road, and carting contractors in connection with railways, docks, wharves and warehouses —carters, lorrymen and draymen." We presume that many commercial-motor drivers are included by this schedule, although it does not specifically say so. The will, no doubt, elucidate the point, if necessary, as part of its present work in connection with this vital subject. It is clear that all men of military age must be attested before their exemption becomes operative.

German-owned British Companies The question of the Continental Tire and Rubber Company (Great Britain), Ltd., v. the Daimler Co., Ltd., was again mentioned in the House of Commons last week by Mr. Peto, who inquired whether any steps were proposed to promote legislation to bring the Company Law more in accordance with public policy. Mr. P011ock expressed the opinion that the decision in the above-mentioned case did not comniand the general assent of lawyers, nor of the commercial community., If it were upheld, it might have grotesque and mischievous results. Mr. Butcher referred to the case of a German-owned company which controlled a coal business in South Wales. Sir A. Markham, Captain Pretyman, and Lord Charles Beresford also favours legislation.

The Attorney-General, Sir F. E. Smith, recapitulated the existing conditions tinder which inspectors or supervisors had been appointed. He was not indisposed to consider any reasonable and practicable suggestion. He personally thought that if the alien holding in a company passed beyond a certain proportion, it should then not be treated as a British Corporation. The risk of hardship of approach to, and passage beyond, the dividing line, was obvious. He assured the House, however, that the whole matter was under the most careful consideration.

We wish to point out that, so far as we have been able to examine the situation, them is nothing to prevent a German-owned British (sic) company from remitting large sums to its correspondents in any neutral country. Once the money is in such a neutral country, who can say what is done with it's Recent Registrations.

Tomlinson and Co. (Bingley), Ltd. (21,000), with its office at 53, Belgra,ve Road, Bingley, to carry on the business of carrying passengers and goods.

Yet another effort is to be made, this time by a concern that is called The Return Journey Co., Ltd. with its offices at 28, Cowcross Street, Smithifield, E.C., to develop a scheme for the working of a freightexchange. We hope that this project will not, like so many earlier efforts, break down through too high a percentage of "failures to fit." That is the controlling factor.

It may interest our readers to know that the Royal Naval motorvan carrying the searchlight, which figured in the recent Lord Mayor's Show, and of which display we reproduced two excellent photographs having a bearing on the industry in our issue for the 18th of November (page 232b), was a TillingStevens vehicle, one of the petrolelectric four-ton type, a design which is obviously particularly useful for such a, purpose.

Our Fund is principally concerned, at the moment, with the proceeds of to-night's concert at the Royal Automobile Club. This concert, of course, can only be supported by members and their guests. It begins at 8.45 p.m. tonight (Thursday), and we understand that a number of tables has already been reserved by members, who intend to dine at the Club before the concert. There is, now, a display of " comforts" in the R.A,C, entrance hall.

The Honorary Secretary of the Electric Vehicle Committee, Mr. F. Ayton, points out in a circular letter that the Manchester Corporation has recently served notices upon large numbers of owners and tenants in the city of Manchester, to abate alleged nuisances, by discontinuing to keep horses an their premises. Mr. Ayton urges the claims of battery-equipped vehicles, in these circumstances. It is obvious, of course, that petrol-driven and steam-driven vehicles will have similar claims to consideration.

Our best editorial and personal good wishes to readers overseas, both military and civilian, for Xmas and the New Year. May their doings, if subdued by war's influences, still be Lright and of good augury.

The British AmericanImport Co., Ltd., of 15, Cockspur Street, S.W., asks us to state that it is in a position to give immediate delivery of one-ton, 2-ton and 3k-ton Acason Cranford Bridge.

Cranford Bridge, on the main Bath road, is closed to traffic, and will be closed for some time to come. Police, are patrolling the road, on each side of the bridge, and are directing traffic. via, Harlington. Special care should be taken at night, as the relief road is narrow, although of reasonablygood surface.

The Secretary of the C.M.U.A. (3, Pall Mall, S.W.) has in his possession one of the new driver's handbooks, which handbook was picked up in the street. It contains various notes by the owner, but neither his name nor address. We hope that this paragraph may lead to the lodging of the desired application for its return.

We have often referred to the tieMvity,of the Roads Improvement Association, the offices of which body are at 15, Dartmouth Street, Westminster, S.W., to the end that everything possible shall be done, under present eIrcurnstaiTees, to guard against loss of condition in the main roads of the country. Particulars of the work of the Association, and of its immediate programme, can be obtained from its secretary, Mr. Wallace E. Riche, on application. A vote of £150 has just been Made to the Association's funds by the Royal Automobile Club, with special reference to the present urgent need for the exercise of all possible observations and precautions. Sales in Birmingham.

Heath's Garage, Ltd., of Birmingham, continues its successful participation in the sale of commercial vehicles. A 31-ton Commercar has just been ordered by James Booth and Co. (1915), Ltd., whilst recent sales by the company include a list of purchases by some 30 wellknown buyers. The vehicles are of for one-ton to five-tons capacity.

Corporal Frederick Lane, for some years a Claims Inspector on the City Branch staff of the Car and General insurance Corporation, Ltd., was killed in action in Gallipoli, an the 29th October last.

It was with sincere feelings of regret that we heard of the death of Mr. J. S. Stafford, the first secretary of the Motor Trade Association. Mr. Stafford was a hard and unflagging worker,and was 'gifted with unique personal qualities. He had ,suffered from ill-health for many months, and the cause of the agent, considered in its widest sense, is the poorer by his decease.

The L.G.B. Inspector is in favour of granting Hull's loan application to pay for two motor fire-engines.

There is a marked tendency amongst the municipalities of the Australian Commonwealth to extend motor fire-engine equipment. Melbourne has probably given the best lead, and that city now possesses motor fire-engines, etc., in connection with its fire brigade, which are valued at more than £26,000. : Halley's Dividend.

The directors of Halley's Industrial Motors, Ltd., have decided to complete a balance-sheet as at the end of October last, owing to the fact that the works were then placed under the control of the Ministry of Munitions. A final dividend of five per cent. (actual), and a bonus of is. per share, free of income tax, is recommended. Distribution is, therefore, at the same rate as for the year 1914. The company's factory is fully occupied.

Amongst:the. things of which we were, urged to, take note, prior to the war, the very efficient, although German, methods of organizing industry are not the least, If the war does this country any r.eal good, and at. present.we are united in insisting that it shall, same of it will undoubt-illy lie in

our more direct attention to questions of a like nature to them.

The engineering industry, to the fore, as is its custom, is already devising means to that end, and as the result. of a series of debates held at the Engineers' Club, Manchester, that body is forming a special committee for the purpose of organizing the whole industry with the object of improving manufacturing inoesses, developing foreign trade, and securing better conditions of work for all.

It is pointed out that. the capital invested in the 'British engineering industry is over 300 millions sterling. The proposal is to form an association comprising British manufacturers engaged ni all branches of engineering, and, with annual subscriptions equivalent to 0.1 per cent, of the total capital, ,C:00,000 would be available yearly.