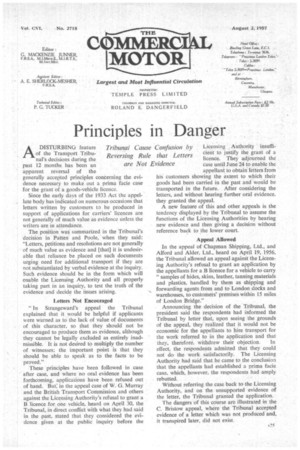 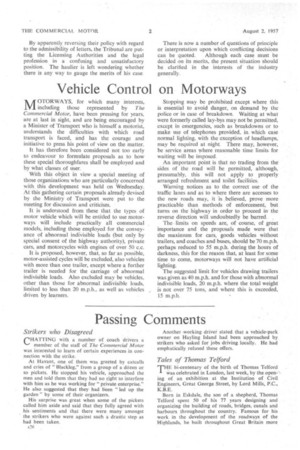 Page 27, 2nd August 1957 — Principles in Danger
Close
Noticed an error?
If you've noticed an error in this article please click here to report it so we can fix it.

ADISTURBING feature of the Transport Tribunal's decisions during the past 12 months has been an apparent reversal of the generally accepted principles concerning the evidence necessary to make out a prima fade case for the grant of a goods-vehicle licence.

Since the early days of the 1933 Act the appellate body has indicated on numerous occasions that letters written by customers to be produced in support of applications for carriers' licences are not generally of much value as evidence unless the writers are in attendance.

The position was summarized in the Tribunal's decision in Patten and Poole, when they said: -Letters, petitions and resolutions are not generally of much value as evidence and [that] it is undesirable that reliance be placed on such documents urging need for additional transport if they are not substantiated by verbal evidence at the inquiry. Such evidence should be in the form which will enable the Licensing Authority and all properly taking part in an inquiry, to test the truth of the evidence and decide the issues arising.

Letters Not Encouraged "In Strangeward's appeal the Tribunal explained that it would be helpful if applicants were warned as to the lack of value of documents of this character, so that they should not be encouraged to produce them as evidence, although they cannot be legally excluded as entirely inadmissible. It is not desired to multiply the number of witnesses: the important point is that they should be able to speak as to the facts to be proved."

These principles have been followed in case after case, and where no oral evidence has been forthcoming, applications have been refused out of hand. But: in the appeal case of W. G. Murray and the British Transport Commission and others against the Licensing Authority's refusal to grant a B licence for one vehicle, heard on April 30, the Tribunal, in direct conflict with what they had said in the past, stated that they considered the evidence given at the public inquiry before the Licensing Authority insufficient to justify the grant of a licence. They adjourned the case until June 24 to enable the appellant to obtain letters from his customers showing the extent to which their goods had been carried in the past and would be transported in the future. After considering the letters, and without hearing further oral evidence, they granted the appeal.

A new feature of this and other appeals is the tendency displayed by the Tribunal to assume the functions of the Licensing Authorities by hearing new evidence and then giving a decision without reference back to the lower court.

Appeal Allowed In the appeal of Chapman Shipping, Ltd., and Afford and Alder, Ltd., heard on April 19, 1956, the Tribunal allowed an appeal against the Licensing Authority's refusal to grant an application by the appellants for a B licence for a vehicle to carry " samples of hides, skins, leather, tanning materials and plastics, handled by them as shipping and forwarding agents from and to London docks and warehouses, to customers' premises within 15 miles of London Bridge."

Announcing the decision of the Tribunal, the president said the respondents had informed the Tribunal by letter that, upon seeing the grounds • of the appeal, they realized that it would not be economic for the appellants to hire transport for • the work referred to in the application and that they, therefore, withdrew their objection. In effect, the respondents admitted that they could not do the work satisfactorily. The Licensing Authority had said that he came to the conclusion that the appellants had established a prima facie case, which, however, the respondents had amply rebutted.

Without referring the case back to the Licensing Authority, and on the unsupported evidence of the letter, the Tribunal granted the application.

The dangers of this course are illustrated in the C. Bristow appeal, where the Tribunal accepted evidence of a letter which was not produced and, it transpired later, did not exist. By apparently reversing their policy with regard to the admissibility of letters, the Tribunal are putting the Licensing Authorities and the legal profession in a confusing and unsatisfactory position. The haulier is left wondering whether there is any way to gauge the merits of his case There is now a number of questions of principle or interpretation upon which conflicting decisions can be quoted. Although each case must be decided on its merits, the present situation should be clarified in the interests of the industry generally.