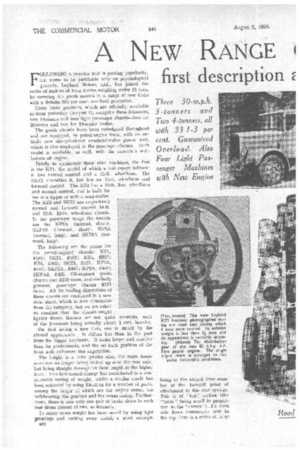 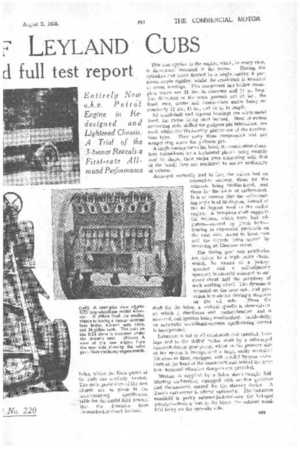 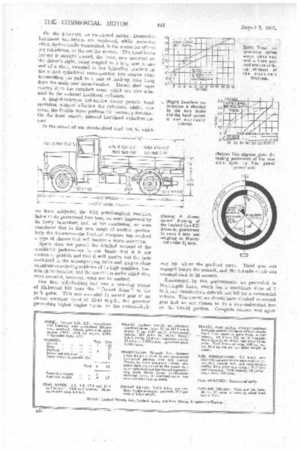 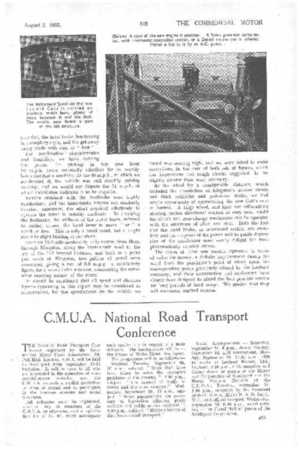 Page 38, 2nd August 1935 — A NEW RANGE
Close
Noticed an error?
If you've noticed an error in this article please click here to report it so we can fix it.

FOLLOWING a practice that is gaining popularity, but seems to be justifiable only on psychological grounds, Leyland Motors, Ltd., has joined the ranks of makers of 4-ton lorries weighing under 21 tons, by covering the goods models in a range of new Cubs with a definite 331 per cent. overload guarantee.

These latest products, which are officially available as from yesterday (August 1), comprise three 3-tonners, two 4-tonners and four light passenger chassis—two for 20-Seater and two for 24-seater bodies.

The goods chassis have been redesigned throughout and are equipped, in petrol-engine form, with an entirely new six-cylindered overhead-valve power unit, which is also employed in the passenger chassis. Each model is available, as well, with the concern's wellknnwn oil engine.

Briefly to enumerate these nine machines, the first is the KZ1, the model of which a test report follows; it has normal control and a I2-ft. wheelbase. The SKZI resembles it, but has an 11-ft. wheelbase and forward control. The KZ4 has a 10-ft. 3-in, wheelbase and normal control, and is built for use as a tipper or with a semi-trailer. The KZ3 and SKZ3 are respectively normal and forward control 14-ft. and 12-ft. 10-in, wheelbase chassis. In the passenger range the models are the KP2A (normal, short), SKP2A (forward, short), KP3A (normal, long), and SKP3A (forward, long).

On first seeing a new Cub, one is struck by the altered appearance. It differs less than in the past from the bigger Leylands. It looks larger and sturdier than its predecessors, and the set-back position of the front axle enhances this impression.

The height is a little greater also, the main frame members no longer being kicked up over the rear axle, but being straight throughout their length at the higher level. This last-named change has contributed to a considerable saving of weight, whilst a similar result has been achieved by using Elektron for a number of parts, among the larger of which are the engine sump, the bell-housing, the gearbox and the worm casing. Furthermore, there is now only one pair of brake shoes in each rear drum instead of two, as formerly.

In many cases weight has been saved by using light pressings and cutting away metal, a good example being in the arched cross-member at the forward point of attachment to the rear springs. This is of "hat" section (the "brim '! being small in proportion -to the "crown"). Its open side faces downwards and in the top there is a series of large holes, whilst the flitch plates at its ends are similarly treated. The main particulars of the new chassis are as given, in the accompanying specification -'table for the model KZ1 (except that the 4-tonners have Dewandre-Lockheed brakes). This also applies to the engine, which, in every case, is three-point mounted in the frame. Having the cylinders and trunk formed by a single casting, it pos sesses ample rigidity, whilst the crankshaft is mounted in seven bearings. This component has hollow crank pins, which are 21 ins. in diameter and 11 in. long. The diameters of the main journals are 2i ins., the front, rear, centre and intermediate mains being respectively 21 ins., 11 in., and 11 in. in length.

All crankshaft and big-end bearings are white-metal lined, the mains being steel backed. Steel H-section connecting rods, drilled for gudgeon-pin lubrication, are used, whilst the Wellworthy pistons are of the floating. boss type. They• carry three compression and one scraper ring above the gudgeon pin.

A single casting forms the head, the combustion chambers (considered on a horizontal plane) being roughly oval in shape, their major -axes coinciding with that of the head; they are machined to ensure uniformity of volume.

Arranged vertically and in line, the valves bed on screwed-in seatings, those for the exhausts being Stellite-faced, and those for the inlets of carbon-steel.

It is of interest that the valve-seating angle is of 30 degrees, instead of the 40 degrees used in the earlier engine. A two-piece shaft supports the rockers, which have ball ad justers—secured by pinch bolts— bearing in cup-ended push-rods on the near side, access to these rods and the tappets being (gained by removing an Elektron cover.

The timing gear and auxiliaries are driven by a triple roller chain.

which, by means of a jockey sprocket and a self-adjusting sprocket, is cleverly arranged to sur round about half the periphery of each working wheel. The dynamo is mounted on the near side, and pro vision is made for driving a magneto on the off side. From the shaft for the latter, a vertical spindle is skew-driven, on which a distributor and contact-breaker unit is mounted, coil ignition being standardized. Incidentally, an automatic centrifugal-vacuum spark-timing control is incorporated.

Lubricant is fed to all crankshaft and camshaft bearings and to the drilled rocker shaft by a submerged camshaft-driven gear-pump, whilst in the pressure side of the system is incorporated a large, easily accessible felt-element filter, equipped with a relief by-pass valve. Both at the front of the crankshaft and behind the gearbox, torsional vibration dampers are provided.

Mixture is supplied by a Solex down-draught SelfStarting carburetter, equipped with air-flow governor and thermostatic control for the starting device. A Zenith carburetter is offered optionally. The induction manifold is partly exhaust-jacketed—on the hot-spot principle—from a port in the block, the exhaust mathfold being on the opposite side.

On the 4-tonners, as mentioned earlier, DewandreLockheed foot-brakes are employed, whilst muscular effort, hydraulically transmitted, is the means for affording retardation on the smaller models. The hand-brake lay-out is straightforward, the lever, now mounted on the driver's right, being coupled to a long arm at one end of a shaft, mounted in two light-alloy brackets on the arched cylindrical cross-member, two shorter arms transmitting the pull to a pair of hook-up links hung from the main rear cross-member. Thence steel tapes convey it to the camshaft arms, which are also actuated by the external Lockheed cylinders.

A hinged-link-type lost-motion device permits hand operation without affecting the cylinders, whilst, vice versa, the flexible tapes perform the necessary function. On the front wheels, internal Lockheed cylinders are used.

At the outset of our standardized road test, to which

we have subjected the KZ1 petrol-engined machine, laden to its guaranteed four tons, we were impressed by its lively behaviour, and, at the conclusion, we were convinced that in this new range of models—particularly the 3-tonners—the Leyland company has evolved a type of chassis that will receive a warm reception.

Space does not permit the detailed account of the machine's performance in our hands that it is our custom to publish and that it well merits, but the facts contained in the accompanying table and graphs alone constitute convincing evidence of its high qualities. Certain characteristics, and the conditions under which they were revealed, however, must not be omitted.

Our first hill-climbing test was a non-stop ascent of Richmond hill from the "Dysart Arms" to the park gates. This was ascended in second gear at an almost constant speed of 12-13 m.p.h., the governor preventing higher engine r.p.m. on the section—half way up—where the gradient eases. Third gear was engaged before the summit, .and the 0.4-mile climb was accomplished in 93 seconds.

Encouraged by this performance, we proceeded to Nightingale Lane, which has a maximum slope of 1 in 5, and constitutes a difficult test hill for a commercial vehicle. This ascent we should have climbed in second gear had we not chosen to do a stop-and-restart test on the 1-in-5i. portion. Complete success was again recorded, the hand brake functioning in exemplary style, and the get-away being made with ease in " first."

For accelerative characteristics and flexibility, we have nothing but praise, the pick-up in top gear from 10 m.p.h. being unusually effortless for so heavily laden and fast a machine. At the 40 m.p.h., to which we accelerated it, the vehicle was still steadily gaining velocity, and we would not dispute the 54 m.p.h. of which calculation indicates it to be capable.

Results obtained with the footbrake were highly satisfactory, and the hand-brake returns not markedly inferior ; moreover, the effort required effectively to operate the latter is notably moderate. In applying the footbrake, the stiffness of the metal tapes, referred to earlier, caused the hand lever to move " on" a notch ,or two. This is only a small point, but it might result in slight binding of the shoes.

Over an 18.6-mile moderately hilly course, from Ham, through Kingston, along the Portsmouth road to the top of the hill beyond Cobham, and back to a point just south of Kingston, two gallons of petrol were consumed, giving a rate of 9.3 m.p.g.—a satisfactory figure, for a six-cylinder 4-tonner, considering the somewhat exacting nature of the route.

It should be mentioned that all speed and distance figures appearing in this report may be considered as conservative, for the speedometer on the vehicle we

tested was reading high, and we were asked to make corrections, in the case of both sets of figures, which our impressions and rough checks suggested to be slightly greater than were necessary.

At the wheel for a considerable distance, which included the negotiation of Kingston's narrow streets and thick vehicular and pedestrian traffic, we had ample opportunity of appreciating the new Cub's ease of control. A large wheel, and light but self-centring steering, makes directional control an easy task, whilst the clutch and gear-change mechanism can be operated with the minimum of effort and skill. Both the foot and the hand brake, as mentioned earlier, are excellent, and the response of the power unit to gentle depression of the accelerator must surely delight the most phlegmatically minded driver.

The prices of these new models represent, in terms of value for money, a definite improvement (using the word from the purchaser's point of view) upon the corresponding goods previously offered by the Leyland company, and their construction and equipment have clearly been designed to afford the best possible service for long periods of hard usage. We predict that they will encounter marked success.