WHERE THE COACH BEATS THE _RAILWAY. 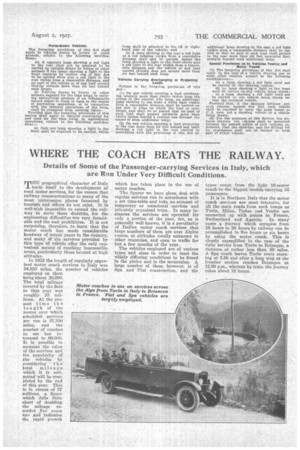 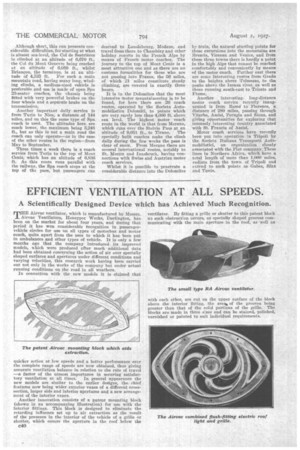 Page 61, 2nd August 1927 — WHERE THE COACH BEATS THE _RAILWAY.
Close
Noticed an error?
If you've noticed an error in this article please click here to report it so we can fix it.

Details of Some of the Passenger-carrying Services in Italy, which are Run Under Very Difficult Conditions.

THEgeographical character of Italy lends itself to the development of road motor services, for the reason that railway communications to many of the most picturesque places favoured by tourists and others do not exist. It is well-nigh impossible to extend the railway to serve these districts, for the engineering difficulties are very formidable and the cost prohibitive. It is not surprising, therefore, to learn that the motor coach has made considerable headway of recent years in the country, and many off the services provided by this type of vehicle offer the only convenient means of reaching inaccessible areas particularly those located at high altitudes.

scheduled services are run is 87,800 miles, and the number of coaches in use has increased to 60,000. It is possible to measure the value of the services and the popularity of the vehicles by considering t h e total mileage which it is estimated will be completed by the end of this year. This is in excess of 37 millions.. a figure which .falls little short of doubling the mileage recorded five years ago and indicates the rapid growth

which has taken place in the use Of motor coaches.

Tha figures we bave given deal with regular services run in accordance with a set time-table and take no account of temporary or occasional cervices and privately organized trips. In many instances the services are operated for only a portion of the year, for, as is generally well known, it is a peculiarity of Italian motor coach services that large numbers of them are over Alpine 'elites, at altitudes totally unknown in other countries, and open to traffic for but a few months of the year.

The vehicles employed are of various types and sizes in order to meet the widely differing conditions to be found in the plains and in the mountains. A large number of them, however, is of Spa and Fiat construction, and the

types range from the light 10-seater coach to the biggest models carrying 36 passengers.

It is in Northern Italy that the motor coach services are most intensive, for all the main roads from such towns as Turin, Milan, Padua and Venice are connected up with points in France, Switzerland and Austria. In many cases a journey which occupies from 16 hours to 20 hours by railway can be accomplished in five hours or six hours by using the motor coach. This is clearly exemplified in the case of the daily service from Turin to Briancon, a distance of rather less than 80 miles. A Spa coach leaves Turin every morning at 7.30 and after a long stop at the frontier station reaches Briancon at 12.30 p.m., whereas by train the journey takes about 18 hours.

Although short, this run presents considerable difficulties, for starting at what is almost sea-level, the Col de Sestrieres is climbed at an altitude of 6,670 ft., the Col du Mont Genevre being reached at an altitude of 6,080 ft., whilst Brianeon, the terminus, is at an altitude of 4,833 ft. For such a main mountain road, having many long, winding climbs, a medium-sized vehicle is preferable and use is made of open Spa 23-seatee coaches; the chassis being fitted with very powerful brakes on the four wheels and a separate brake on the transmission.

Another important daily service is from Turin to Nice, a distance of 144 miles, and on this the same type of Spa coach is used. The altitudes here are much lower, the maximum being 3,248 ft., but as this is not a main road the coach can only operate--as in the case of the other routes in the region—from May to September.

Three times a week there is a coach service from Turin to the top of Mont Cenis, which has an altitude of 6,836 ft. As this route runs parallel with the railway, the Spa coach stops at the top of the pass, but passengers can descend to Lanslebourg, Modane; and travel from there to Chambery and other holiday resorts in the French Alps by means Of French motor coaches. The journey to the top of Mont Cenis is a most attractive one and as there are no customs formalities for those who are not passing into France, the 00 miles, of which 21 miles constitute steady climbing, are covered in exactly three hours.

It is in the Dolomites that the most intensive motor mountaineering is to be found, for here there are 20 coach routes, operated by the Societe Automobilistice Dolomiti, to points which are very rarely less than 4,000 ft. above sea level. The highest motor coach route in the world is that from Merano, which runs over the Stelvio Pass at an altitude of 9,051 ft., to Tirana. The specially built coaches make the climb daily during the few weeks the pass is clear of snow. From Merano there are several international routes, notably to St.. Moritz and Innsbruck, having connections with Swiss and Austrian motor coach services.

Whilst it is possible to penetrate a considerable distance into the Dolomites by train, the natural starting points for these excursions into the mountains are Brescia, Vicenza and Venice, and from these three towns there is hardly a point in the high Alps that cannot be reached comfortably and conveniently by means of the motor coach. Further east there are some interesting routes from Grado to the heights above Tolmezzo, to the peaks abovo the Izonza river, as well as those running south-east to Trieste and Fiume, Another interesting, long-distance motor coach service recently inaugurated is from Rome to Florence, a distance of 280 miles, passing through Viterbo, Assisi, Perugia and Siena, and giving opportunities for exploring that intensely interesting Country associated with St. Francis of Assisi.

Motor coach services have recently been put into operation in Tripoli by the Societe Italitina Transporti Automobilistici, an organiza8on closely associated with the Fiat company. These lines in Northern Africa, which have a total length of more than 1,000 miles, radiate from the town of Tripoli and extend to such points as Gabes, Sfax and Tunis,