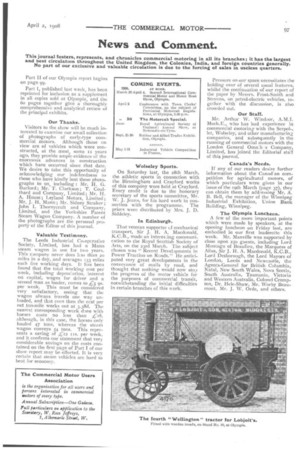 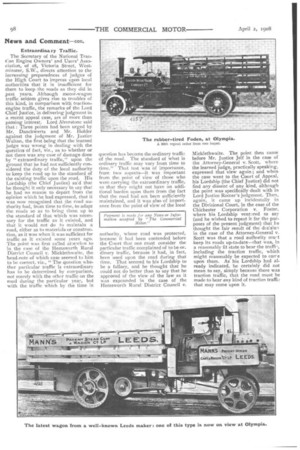 Page 7, 2nd April 1908 — News and Comment.
Close
Noticed an error?
If you've noticed an error in this article please click here to report it so we can fix it.
Keywords : Steam Wagon, Wolseley Motor Company

This journal fosters, represents, and chronicles commercial motoring in all its branches; it has the largest and best circulation throughout the United Kingdom, the Colonies, India, and foreign countries generally. No part of our exclusive and valuable circulation is due to the forcing of sales in useless quarters.

Part II of our Olympia report begins on page 99.

Part I, published last week, has been reprinted for inclusion as a supplement in all copies sold at Olympia, and the 60 pages together give a thoroughly comprehensive and analytical review of the principal exhibits.

Visitors to the show will be much interested to examine our small collection of photographs of early-type commercial motors. Although those on view are of vehicles which were constructed, at the most some xi years ago, they provide ample evidence of the enormous advances in construction which have occurred since that date. We desire to take this opportunity of acknowledging our indebtedness to those who have kindly lent these photographs to us, including : Mr. H. G. Burford; Mr. 1'. Clarkson; T. Coolthard and Company, Limited ; Mr. H. A. House ; Leyland Motors, Limited ; Mr. J. H. Mann ; Mr. Sidney Straker ; John I. Thornycroft and Company, Limited, and the Yorkshire Patent Steam Wagon Company. A number of the photographs are the personal property of the Editor of this journal.

The Leeds Industrial Co-opEratiye Society, Limited, has had a Mann steam wagon in use for two years. This company never does lcss than 20 miles in a day, and averages 133 miles each five working days. It has been found that the total working cost per week, including depreciation, interest on capital, wages for driver and a second man as loader, comes to 95. per week. This must be considered very satisfactory, seeing that the wagon always travels one way unloaded, and that even then the cost per net ton-mile works out at 3.38d. The nearest corresponding work done with horses costs no less than L'18, although, in this case, the horses only hauled 47 tons, whereas the steam wagon conveys 54 tons. This represents a saving of ,4"12 Its, per week, and it confirms our statement that very considerable savings on the costs contained on the first page of Part I of our show report may be effected. It is very certain that steam vehicles are hard to beat for economy.

On Saturday last, the 28th March, the athletic sports in connection with the Birmingham and Crayford works of this company were held at Crayford. Every credit is due to the honorary secretary of the sports committee, Mr. W. J. Jeans, for his hard work in connection with the programme. The prizes were distributed by Mrs. J. D. Siddeley.

That veteran supporter cf mechanical transport, Sir J. H. A. Macdonald, K.C.B., made an interes:ing communication to the Royal Scottish Society of Arts, on the 23rd March. The subject chosen was " Recent Developments in Power Traction on Roads." He anticipated very great developments in the conveyance of mails by road, and thought that nothing would now stop the progress of the motor vehicle for the purposes of commercial transit, notwithstanding the initial difficulties in certain branches of this work.

Pressure on our space necessitates the holding over of several usual features, whilst the continuation of our report of the paper by Messrs. Frost-Smith and Stevens, on petrol-electric vehicles, together with the discussion, is also crowded out.

Mr. Arthur W. Wind:-:or, A.M.I. Mech.E., who has had experience in commercial motoring with the Serpol-, let, Wolseley; and other manufacturing companies, and subsequently in the running of commercial motors with the London General Omn:b .s Company, Limited, has joined the Editorial staff of this journal.

If any of our readers desire further information about the Canad'an competition for agricultural motors, of which particulars were given in our issue of the r9tla March (page 37), they can obtain them by addressing Mr. A. B. Bell, the manager of the Winnipeg Industrial Exhibition, Union Bank Building, Winnipeg.

A few of the more important points which were made by speakers, at the opening luncheon on Friday last, are embodied in our first leaderette this week. Mr. Manville was supported by close upon 250 guests, including Lord Montagu of Beaulieu, the Marquess of Ailsa, Sir J. H. A. Macdonald, K.C.B., Lord Desborough, the Lord Mayors of London, Leeds and Newcastle, the Agents-General for British Columbia, Natal, New South Wales, Nova Scotia, South Australia, Tasmania, Victoria and Western Australia, Colonel Crompton, Dr. Hele-Shaw, Mr. Worby Beaumont, Mr. J. W. Orde, and others.

The Secretary of the National Tract:on Engine Owners' and Users' Association, of 28, Victoria Street, Westminster, S.W., directs attention to the increasing preparedness of judges of the High Court to impress upon local authorities that it is insufficient for them to keep-the roads as they did in past years. Although motor-wagon traffic seldom gives rise to troubles of this kind, in comparison with tractionengine traffic, the remarks of the Lord Chief Justice, in delivering judgment in a recent appeal case, are of more than passing interest. Lord Alverstone said that : Three points had been urged by Mr. Danckwerts and Mr. Hohler against the judgment of Mr. Justice Walton, the first being that the learned judge was wrong in dealing with the question! of fact, viz., as to whether or not there was any case of damage done by " extraordinary traffic," upon the ground that he had not sufficiently considered the duty of the local authority to keep the road up to the standard of the existing traffic upon the road. His Lordship (the Chief Justice) said that he thought it only necessary to say that he had no reason to depart from the opinion which he had expressed, that it was now recognised that the road authority had, from time to time, to adapt the roads so as to bring them up to the standard of that which was necessary for the traffic as it existed, and that it would not do to maintain a road, either as to materials or construction, as it was when it was sufficient for traffic as it existed some years ago. The point was first called attention to in the case of the Hemsworth Rural District Council v. Micklethwaite, the head-note of which case seemed to him to be correct, viz., " The question whether particular traffic is extraordinary has to be determined by comparison, not merely with the other traffic on the road during the particular year, but with the traffic which by the time in question has become the ordinary traffic of the road. The standard of what is ordinary traffic may vary from time to time." That test was of importance, from two aspects—it was important from the point of view of those who were carrying the extraordinary traffic, so that they might not have an additional burden upon them from the fact that the road had not been sufficiently maintained, and it was also of importance from the point of view of the local

authority, whose road was protected, because it had been contended before the Court that one must consider the particular traffic complained of to be or dinary traffic, because it had, in fact, been used upon the road during that time. That seemed to his Lordship to be a fallacy, and he thought that he could not do better than to say that he approved of the view of the law as it was expounded in the case of the Hemsworth Rural District Council v.

Micklethwaite. The paint then came before Mr. Justice Jelf in the case of the Attorney-General v. Scott, where the learned judge, practically speaking, expressed that view again; and when the case went to the Court of Appeal, his Lordship (the Chief Justice) did not find any dissent of any kind, although the point was specifically dealt with in Lord Justice Romer's judgment. Then, again, it came up incidentally in the Divisional Court, in the case of the Chichester Corporation v. Foster, where his Lordship vent.lred to say (and he wished to repeat it for the purposes of the present judgment) that he thought the fair result of the dec:siol in the case of the Attorney-General v. Scott was that a road authority mu,t keep its roads up-to-date—that was, in a reasonably fit state to bear the traffi-, including the traction traffic, which might reasonably be expected to con-e upon them. As his Lordship had already indicated, he certainly did not mean to say, simply because there was traction traffic, that the road must be made to bear any kind of traction traffi: that may come upon it.