The power of two 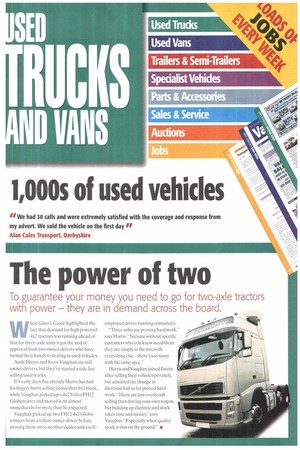 Page 69, 29th September 2005 — The power of two
Close
Noticed an error?
If you've noticed an error in this article please click here to report it so we can fix it.
Keywords : Harlem Globetrotters, Metromedia, Sports Entertainment, Tractor, Volvo Fh

To guarantee your money you need to go for two-axle tractors with power — they are in demand across the board.

When Glass's Guide highlighted the fact that demand for high powered 4x2 tractors was running ahead of that for three-axle units it got the nod of approval from two owner-drivers who have turned their hands to dealing in used vehicles.

It's early days, but already Harris has had his fingers burnt selling classic fleet 6x2 stock, while Vaughan picked up a 4x2 Volvo FH12 Globetrotter and moved it on almost immediately for more than he expected.

Vaughan picked up two FH 12 4x2 Globetrotters from a fellow owner-driver before moving them on to another dealer and a self employed driver running containers.

"Three axles are proving hard work," says Harris," because without specific customers who you know need them they are simply in the mix with everything else — there's too many with the same spec."

Harris and Vaughan joined forces after selling their vehicles privately. but admitted the change in direction had so far proved hard work. 'There are less overheads selling than driving your own wagon, but building up clientele and stock takes time and money." says Vaughan. 'Especially when quality stock is thin on the ground." •