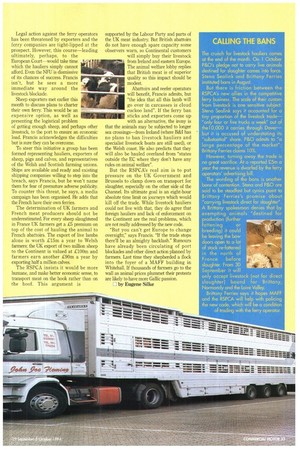 The crunch For livestock hauliers comes at the end of the month. On 1 October PD's pledge not to carry live animals destined for slaughter comes into force. Steno Sealink and Brittany Ferries instituted bans in August.

But there is friction between the RSPCA's new allies in the competitive ferry business. The scale of their custom from livestock is one sensitive subiect. Steno Sealink says it accounted for a tiny proportion of the livestock trade— "only four or five trucks a week" out of the10,000 it carries through Dover— but it is accused of understating its "substantial" share. P&O admits to "a large percentage of the market"; Brittany Ferries claims 10%.

However, turning away the trade is no great sacrifice. At a reported £5m a year the revenue is dwarfed by the ferry operators' advertising bill.

The wording of the bans is another bone of contention. Steno and P&O are said to be steadfast but cynics point to Brittany Ferries's promise about "carrying livestock direct for slaughter". A Brittany spokesman denies that by exempting animals "destined for production (further

fattening or breeding) it could be leaving the bow doors open to a lot of stock re-fattened in the north of France before slaughter. From 30 September it will only accept livestock (not for direct slaughter) bound for Brittany, Normandy and the Loire Valley. Brittany Ferries says it hopes MAFF and the RSPCA will help with policing the new code, which will be a condition of trading with the Ferry operator.