Director had been barred 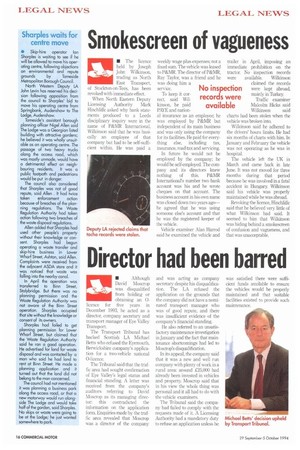 Page 18, 29th September 1994 — Director had been barred
Close
Noticed an error?
If you've noticed an error in this article please click here to report it so we can fix it.
Keywords : Logistics, Transport, Business / Finance, Law / Crime

• Although David Moscrop was disqualified from holding or obtaining an 0licence for five years in December 1993, he acted as a director, company secretary and transport manager of Eye Valley 'Transport.

The Tribunal said that the traffic area had sought confirmation of Eye Valley's legal status and financial standing. A letter was received from the company's auditors referring to David Moscrop as its managing director: this contradicted the information on the application form. Enquiries made by the traffic area revealed that Moscrop was a director of the company and was acting as company secretary despite his disqualification. The LA refused the application on the grounds that the company did not have a nominated transport manager who was of good repute, and there was insufficient evidence of the company's financial standing He also referred to an unsatisfactory maintenance investigation in January and the fact that maintenance shortcomings had led to Moscrop's disqualification.

In its appeal, the company said that it was a new and well run company with plenty of work in a rural area: around .E25,000 had already been invested in vehicles and property Moscrop said that in his view the whole thing was personal and it all had to do with the vehicle examiners.

The Tribunal said the company had failed to comply with the requests made of it. A Licensing Authority had a mandatory duty to refuse an application unless he was satisfied there were sufficient funds available to ensure the vehicles would be properly maintained and that suitable facilities existed to provide such maintenance.