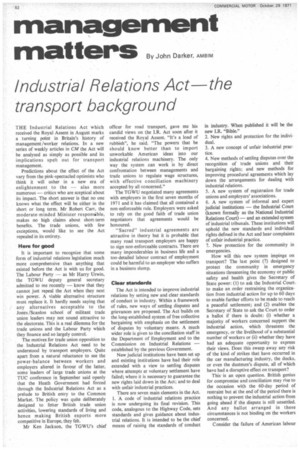 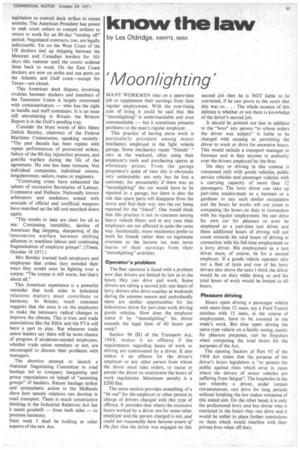 matters By John Darker AM B M

THE Industrial Relations Act which received the Royal Assent in August marks a turning point in Britain's history of management /worker relations. In a new series of weekly articles in CM the Act will be analysed as simply as possible and its implications spelt out for transport management.

Predictions about the effect of the Act vary from the pink-spectacled optimists who think it will usher in a new era of enlightenment to the — alas more numerous — critics who are sceptical about its impact. The short answer is that no one knows what the effect will be either in the short or long term. Mr Robert Carr, the moderate-minded Minister responsible, makes no high claims about short-term benefits. The trade unions, with few exceptions, would like to see the Act repealed in its entirety.

It is important to recognize that some form of industrial relations legislation much more comprehensive than anything that existed before the Act is with us for good. The Labour Party — as Mr Harry Urwin, the TGWU deputy general secretary admitted to me recently — know that they cannot just repeal the Act when they next win power. A viable alternative structure must replace it. It hardly needs saying that any alternatives acceptable to the Jones/Scanlon school of militant trade union leaders may not sound attractive to the electorate. This is a real dilemma for the trade unions and the Labour Party which they finance and so largely control.

The motives for trade union opposition to the Industrial Relations Act need to be understood by transport employers. Quite apart from a natural reluctance to see the power-balance between workers and employers altered in favour of the latter, some leaders of large trade unions at the TUC conference in September said openly that the Heath Government had forced through the Industrial Relations Act as a prelude to British entry to the Common Market. The policy was quite deliberately designed to fetter British trade union activities, lowering standards of living and hence making British exports more competitive in Europe, they felt.

Mr Ken Jackson, the TGWU's chief officer for road transport, gave me his candid views on the I.R. Act soon after it received the Royal Assent. "It's a load of rubbish", he said. "The powers that be should know better than to import unworkable American ideas into our industrial relations machinery. The only way the system can work is by direct confrontation between managements and trade unions to regulate wage structures, with effective conciliation machinery accepted by all concerned."

The TGWU negotiated many agreements with employers in the first seven months of 1971 and it has claimed that all contained a non-enforceable rule. Employers were asked to rely on the good faith of trade union negotiators that agreements would be honoured.

"Sacred" industrial agreements are attractive in theory but it is probable that many road transport employers are happy to sign non-enforceable contracts. There are many imponderables in business life and a too-detailed labour contract of employment could be harmful to an employer who suffers in a business slump.

The Act is intended to improve industrial relations by setting new and clear standards of conduct in industry. Within a framework of rules, new ways of settling disputes and grievances are proposed. The Act builds on the long-established system of free collective bargaining with emphasis on the settlement of disputes by voluntary means. A much wider role is given to the conciliation staff in the Department of Employment and to the Commission on Industrial Relations — established by the previous Government.

New judicial institutions have been set up and existing institutions have had their role extended with a view to settling disputes where attempts at voluntary settlement have failed; where it is necessary to guarantee the new rights laid down in the Act; and to deal with unfair industrial practices.

There are seven main elements in the Act.

1. A code of industrial relations practice is now undergoing its final revision. This code, analogous to the Highway Code, sets standards and gives guidance about industrial relations. It is intended to be the chief means of raising the standards of conduct in industry. When published it will be the new I.R. "Bible."

2. New rights and protection for the individual.

4. New methods of settling disputes over the recognition of trade unions and their bargaining rights; and new methods for improving procedural agreements which lay down the arrangements for dealing with industrial relations.

5. A new system of registration for trade unions and employers' associations.

6. A new system of informal and expert judicial institutions — the Industrial Court (known formally as the National Industrial Relations Court) — and an extended system of industrial tribunals. These institutions will uphold the new standards and individual rights defined in the Act and hear complaints of unfair industrial practice.

7. New protection for the community in emergencies.

How will this new system impinge on transport? The last point (7) designed to protect the community in emergency situations threatening the economy or public safety and health gives the Secretary of State power: (1) to ask the Industrial Court. tomake an order restraining the organization from industrial action for up to 60 days to enable further efforts to be made to reach a peaceful settlement; and (2) enables the Secretary of State to ask the Court to order a ballot if there is doubt: (i) whether a majority of workers concerned support the industrial action, which threatens the emergency, or the livelihood of a substantial number of workers or (ii) whether they have had an adequate opportunity to express their views. Does this sweep away any risk of the kind of strikes that have occurred in the car manufacturing industry, the docks, or even the dustmen's dispute, all of which have had a disruptive effect on transport?

This is an open question. British genius for compromise and conciliation may rise to the occasion with the 60-day period of restraint but at the end of the period there is nothing to prevent the industrial action from going ahead if the dispute is still unsettled. And any ballot arranged in these circumstances is not binding on the workers concerned.

Consider the failure of American labour legislation to control dock strikes in recent months. The American President has power to seek court orders to compel strikers to return to work for an 80-day "cooling off" period. Negotiated contracts, too, are legally enforceable. Yet on the West Coast of the US dockers tied up shipping between the Mexican and Canadian borders for 101 days this summer until the courts ordered them back to work. On the East Coast dockers are now on strike and sea ports on the Atlantic and Gulf coast—except for Texas—are closed.

This American dock dispute, involving rivalries between dockers and members of the Teamsters Union is largely concerned with containerization — who has the right to handle and stuff containers. It is an issue still smouldering in Britain: the Bristow Report is in the DoE's pending tray.

Consider the blunt words of Mrs Helen Delich Bentley, chairman of the Federal Maritime Commission, speaking recently: "The past decade has been replete with repeat performances of protracted strikes, failure of the 80-day injunction process, and guerilla warfare during the life of the agreement. No one has been immune. Not individual companies, individual unions, longshoremen, sailors, mates or engineers.

"Continuing crises have exhausted the talents of successive Secretaries of Labour, Commerce and Defence. Nationally known arbitrators and mediators armed with arsenals of official and unofficial weapons have marched up the hill and marched down again.

"The results to date are clear for all to see: Continuing instability, decline of American flag shipping, sharpening of the 'internecine warfare between shifting alliances in maritime labour and continuing fragmentation of employer groups". (Times, October 18 1971.) Mrs Bentley warned both employers and employees that unless they mended their ways they would soon be fighting over a corpse. "The corpse is still warm, but that's about all."

This American experience is a powerful reminder that both sides in industrial relations matters must contribute to harmony. In Britain, much comment suggests that the onus is on the employers to make the necessary radical changes to improve the climate. This is true; and trade associations like the RHA and the FTA will have a part to play. But whatever trade union leaders say there will be more chance of progress if moderate-minded employees, whether trade union members or not, are encouraged to discuss their problems with managers.

The abortive attempt to launch a National Negotiating Committee in road haulage led to company bargaining and group negotiations on behalf of "assenting groups" of hauliers. Recent haulage strikes and sympathetic action in the Midlands show how tensely relations can develop in road transport. There is much constructive thinking in the Industrial Relations Act but it needs goodwill — from both sides — to promote harmony.

Next week I shall be looking at other aspects of the new Act.