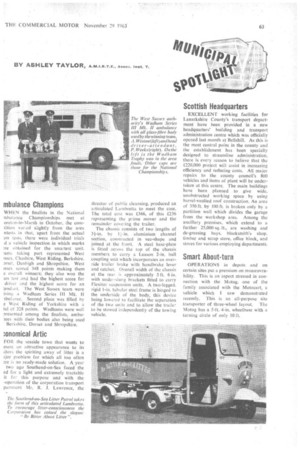 WHEN the finalists in the National -nbulance Championships met at orcton-in-Marsh in October. the corntition var;ed slightly from the area ntests in that, apart from the actual im tests, there were individual trials

d a vehicle inspection in which marks :re obtained for the smartest unit. :am s taking part represented West issex, Cheshire, West Riding, Berkshire. 3rsct, Denbigh and Shropshire. West issex scored 348 points making them e overall winners; they also won the im lest and had the highest score for driver and the highest score for an tendant. The West Sussex team were ivine a Wadham Series 111 Mk. II ibulance. Second place was filled by e West Riding of Yorkshire with a tal of 328 points. Wadhams were well presented among the finalists, ambuices with their bodies also being used Berkshire, Dorset and Shropshire.

FOR the seaside town that wants to esent an attractive appearance to its itors the spiriting away of litter is a tjor problem for which all too often :re is no ready-made solution. A year two ago Southend-on-Sea faced the ed for a light and extremely tractable it for this purpose and with the -operation of the corporation transport partment Mr. R. I. Lawrence, the director of public cleansing, produced an articulated Lambretta to meet the case. The total cost was £366, of this 1236 representing the prime mover and the remainder covering the trailer.

The chassis consists of two lengths of 3+-in. by 11-in. aluminium channel section, constructed in vee-shape and joined at the front. A steel base-plate is fitted across the top of the chassis members to carry a Leason 2-in, ball coupling unit which incorporates an override trailer brake with handbrake lever and ratchet. Overall width of the chassis at the 'var is approximately 3 ft, 6 in. with under-slung brackets fitted to carry Flexitor suspension units, A two-legged. rigid I-in, tubular steel frame is hinged to the underside of the body, this device being lowered to facilitate the separation of the two units and to allow the trailer to be stowed independently of the towing vehicle.

EXCELLENT working facilities for Lanarkshire County's transport department have been provided in a new headquarters' building and transport administration centre which was officially opened last month at Bellshill. As this is the most central point in the county and the establishment has been specially designed to streamline administration, there is every reason to believe that the £220,000 project will assist in increasing efficiency and reducing costs. All major repairs to the county council's 800 vehicles and items of plant will be undertaken at this centre. The main buildings have been planned to give wide, unobstructed working space by using barrel-vaulted roof construction. An area of 350 ft. by 100 ft. is broken only by a partition wall which divides the garage from the workshop area. Among the ancillary premises, which extend to a further 25,000 sq, ft., are washing and de-greasing bays, blacksmith's shop. timber and scrap store, office block, and stores for various employing departments.

OPERATIONS in depots and on certain sites put a premium on manoeuvrability. This is an aspect stressed in connection with the Motug, one of the family associated with the Motocart, a vehicle which I saw demonstrated recently. This is an all-purpose site transporter of three-wheel layout. The Motug has a 5-ft. 4-in, wheelbase with a turning circle of only 10 ft.