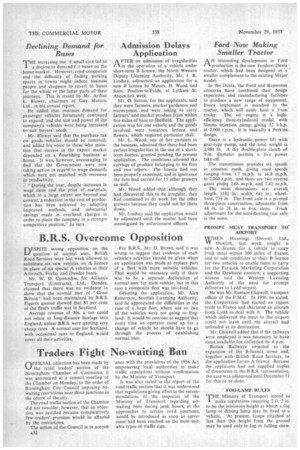 Page 34, 29th November 1957 — Traders Fight No-waiting Ban O FFICIAL objection has been made by
Close
Noticed an error?
If you've noticed an error in this article please click here to report it so we can fix it.

the retail traders' section of the Birmingham Chamber of Commerce, it was announced at a council meeting of the Chamber on Monday, to the order of Birmingham City Council imposing nowaiting restrictions near three junctions in the centre of the city.

The road traffic section of the Chamber did not consider, however, that an objection was justified because comparatively few traders' premises would be affected by the restrictions.

The action of the Council is in accordA32

ance with the provisions of the 1956 Act empowering local authorities to make traffic regulations without confirmation by the Minister of Transport.

It was also stated in the report of the road traffic section that it was understood that regulations giving effect to the recommendations of the inspector of the Ministry of Transport regarding nowaiting bans during peak hours, at the approaches to certain road junctions, would be introduced as soon as agreement had been reached on the most suitable types of traffic sign.