Shape of trucks to come? 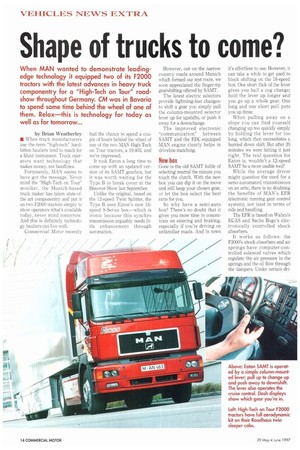 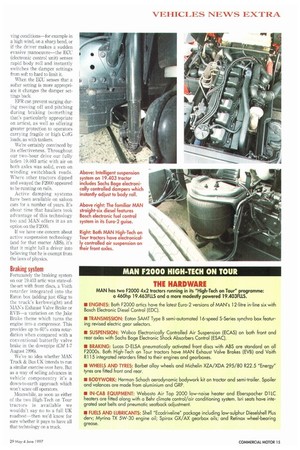 Page 16, 29th May 1997 — Shape of trucks to come?
Close
Noticed an error?
If you've noticed an error in this article please click here to report it so we can fix it.
Keywords : Mechanical Engineering, Technology, Engineering, Agricultural Machinery, Tractor, Shock Absorber, Fn F2000, Brake, Truck, Suspension

by Brian Weatherley • When truck manufacturers use the term "high-tech" hardbitten hauliers tend to reach for a blunt instrument. Truck operators want technology that makes money, not headlines.

Fortunately, MAN seems to have got the message. Never mind the "High-Tech on Tour" moniker, the Munich-based truck maker has taken state-ofthe art componentry and put it on two F2000 tractors simply to show operators what's available today, never mind tomorrow. And this is definitely technology hauliers can live with.

had the chance to spend a couple of hours behind the wheel of one of the two MAN High-Tech on Tour tractors, a 19.403, and we're impressed.

It took Eaton a long time to come up with an updated version of its SAMT gearbox, but it was worth waiting for the Type B to break cover at the Hanover Show last September.

Unlike the original, based on the 12-speed Twin Splitter, the Type B uses Eaton's new 16speed S-Series box—which is ironic because this synchro transmission arguably needs little enhancement through automation. However, out on the narrow country roads around Munich which formed our test route, we soon appreciated the finger-tip gearshifting offered by SAMT.

The latest electric selectors provide lightning-fast changes: to shift a gear you simply pull the column-mounted selector lever up for upshifts, or push it away for a downchange.

The improved electronic "communication" between SAMT and the EDC-equipped MAN engine clearly helps in driveline matching.

Gone is the old SAMT foible of selecting neutral the minute you touch the clutch. With the new box you can dip it on the move and still keep your chosen gear, or let the box select the best ratio for you.

So why have a semi-auto box? There's no doubt that it gives you more time to concentrate on steering and braking, especially if you're driving on unfamiliar roads. And in town it's effortless to use. However, it can take a while to get used to block shifting on the 16-speed box. One short flick of the lever gives you half a cog change; hold the lever up longer and you go up a whole gear. One long and one short pull puts you up three.

When pulling away on a slope you can find yourself changing up too quickly simply by holding the lever for too long, which then necessitates a hurried down shift. But after 20 minutes we were hitting it just right. The real question for Eaton is, wouldn't a 12-speed SAMT be a more usable tool?

While the average driver might question the need for a semi-automated transmission on an artic, there is no doubting the benefits of MAN's EFR (electronic running gear control system), not least in terms of ride and handling.

The EFR is based on Wabco's ECAS and Sachs Boge's electronically controlled shock absorbers.

It works as follows: the F2000's shock absorbers and air springs have computer-controlled solenoid valves which regulate the air pressure in the springs and the oil flow through the dampers. Under certain dri ving conditions—for example in a high wind, on a sharp bend, or if the driver makes a sudden evasive manoeuvre—the ECU (electronic control unit) senses rapid body roll and instantly switches the damper settings from soft to hard to limit it.

When the ECU senses that a softer setting is more appropriate it changes the damper settings back.

EFR can prevent surging during moving off and pitching during braking (something that's particularly appropriate on artics), as well as offering greater protection to operators carrying fragile or high CofG loads, as with tankers.

Were certainly convinced by its effectiveness. Throughout our two-hour drive our fully laden 19.403 artic with air on both axles was solid, even on winding switchback roads. Where other tractors dipped and swayed the F2000 appeared to be running on rails.

Active damping systems have been available on saloon cars for a number of years. It's about time that hauliers took advantage of this technology too and MAN offers it as an option on the F2000.

If we have one concern about active suspension technology (and for that matter ABS), it's that it might lull a driver into believing that he is exempt from the laws of physics.

Fortunately the braking system on our 19.403 artic was state-ofthe-art with front discs, a Voith retarder integrated into the Eaton box (adding just 65kg to the truck's kerbweight) and MAN's Exhaust Valve Brake or EVB—a variation on the Jake Brake theme which turns the engine into a compressor. This provides up to 60% extra retardation when compared with a conventional butterfly valve brake in the downpipe (CM 1-7 August 1996).

We've no idea whether MAN Truck & Bus UK intends to run a similar exercise over here. But as a way of selling advances in vehicle componentry it's a down-to-earth approach which won't scare off operators.

Meanwhile, as soon as either of the two High-Tech on Tour tractors is available we wouldn't say no to a full UK roadtest—then we'd know for sure whether it pays to have all that technology on a truck.