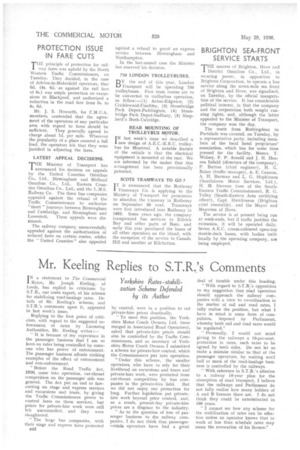 Page 56, 29th May 1936 — PROTECTION ISSUE IN FARE CUTS
Close
Noticed an error?
If you've noticed an error in this article please click here to report it so we can fix it.
Keywords : Transport In East Sussex, Transport In Brighton And Hove, Southdown Motor Services, Stagecoach Group, Trolleybus, Brighton & Hove, Bus, Tram

THE principle of protection for rail' way fares was upheld by the North Western Traffic Commissioners, on Tuesday. They decided, in the case of Ashton-in-Makerfield operators, that 6d. (4s. 6d. • as against the rail fare of 4s.) was ample protection on excursions to Blackpool, and authorized a reduction in the road fare from 5s. to 4s. 6d, Mr. J. S. Howarth, for C.M.U.A. members, contended that the agreement of the operators of any particular area with regard to fares should he sufficient. They generally agreed to charge about id. per mile. Wherever the popularity of a place ensured a full load, the operators felt that they were justified in adjusting the fares.

Lowestoft. These appeals were dismissed..

The railway company unsuccessfully appealed against the authorization of reduced fares on certain routes, whilst the "United Counties" also appealed against a refusal to grant an express service between Birmingham and Northampton.

In the last-named case the Minister has reserved his decision.

IN last week's issue we described a new design of A.E.C.-E.E.C. trolley. bus for Montreal. A notable feature of the vehicle is that the electrical equipment is mounted at the rear. We are informed by the maker that this arrangement has been provisionally patented.

IT is announced that the Rothesay Tramways Co. is applying to the Ministry of Transport for permission to abandon the tramway in Rothesay on September 30 next. Tramways were first introduced into Rothesay in 1882. Some years ago, the company inaugurated bus services to Ettrick Bay and other parts of Butte, and early this year purchased the buses of all other operators on the island, with the exception of the service to Canada Hill and another at Kilchattan.

THE success of Brighton, Hove and

District Omnibus Co., Ltd., in securing power, in opposition to Brighton Corporation, to operate a bus service along the seven-mile sea front of Brighton and Hove, was signalized, on Thesday, by the official inauguration of the service. It has considerable political interest, in that the company and the corporation both sought running rights, and, although the latter appealed to the Minister of Transport. the company won the day.

The service is at present being run at week-ends, but if traffic justifies the extension, it will be operated daily. Seven A.E.C. cream-coloured open-top double-deck buses, with bodies built locally by the operating company, are being employed.