A Breakaway in Chassis Lay-out. 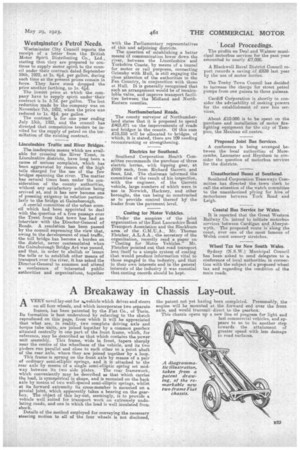 Page 9, 29th May 1923 — A Breakaway in Chassis Lay-out.
Close
Noticed an error?
If you've noticed an error in this article please click here to report it so we can fix it.

AVERY novel lay-out for aavehicle which drives and steers on all four wheels, and which incorporates two separate frames, has been patented by the Fiat Co., of Turin. Its formation is best .understood by referring to the sketch reproduced on this page, from which it will be appreciated that what are, in reality, two complete driving axle and torque tube units, are joined together by a common gearbox situated centrally in one part of the front frame, which, for reference, may be described as that which contains the power unit assembly. This frame, wide in front, tapers sharply near the centre of the wheelbase of the vehicle, and its two girders run parallel and close to each other to a point abaft of the rear axle, where they are joined together by a loop. This frame is sprung on the front axle by means of a pair of ordinary semi-elliptic springs, and it is attached to the rear axle by means of a single semi-elliptic spring set mid way between its two side plates. The rear framework, which conveniently may be described as that which carries the load, is symmetrical in shape, and is mounted on the back axle by means of two well-spaced semi-elliptic springs, whilst at its forward extremity its cross-member is mounted on a pivotal joint, which apparently takes a bearing on the gearbox. The object of this lay-out, seemingly, is to provide a vehicle well suited for transport work on extremely undulating roads, and one in which the load is well insulated from shock.

Details of the method employed for conveying the necessary steering motion to all of the four wheels is not disclosed, the patent. not yet. having been completed. Presumably, the engine will be mounted at the forward end over the front axle, and would transmit direct to the gearbox.

This chassis opens up a new line of progress for light and fast commercial vehicles, and appears to us to be another step towards the attainment of greater speed with less damage to road surfaces.