A NEW SAFETY BRAKE FOR TRAILERS. 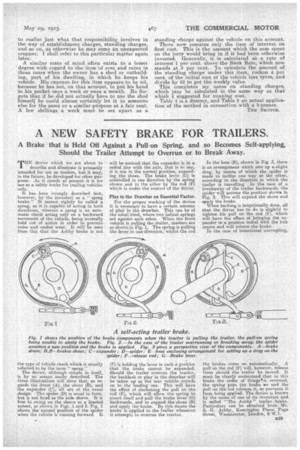 A Brake that is Held Off Against a Pular' Spring, and so Becomes Self-applying, Should the Trailer Attempt to Overrun or to Break Away.

TEE device which we are about to describe and illustrate is primarily intended for use on trailers, but it may, in the future, be developed for other purposes. As it stands at present it is for use as a safety brake for trailing vehicles only.

It has been wrongly described (not, however, by the inventor) as a " sprag brake." It cannot rightly be called a sprag, as it is capable of acting in bath directions, whereas a sprag is an automatic check acting only on a backward movement of the vehicle, being normally held out of action in order to prevent noise arid undue wear. It will be seen from this that the Ashby brake is not

the type of vehicle check which is usually referred to by the term " aprag."

The device, although simple in itself, is by no means easily described. The three illustratiens will show that, as regards the drum (A), the shoes (B), and the expander (C), all are of the usual .design. The spider (D) is usual in form, but is not fixed to the axle sleeve. It is free to swing on the sleeve to a limited extent, as shown in Figs. I and 2. Fig. I shows the normal position of the spider when the vehicle is running forward. It

will be noticed that the expander is in a radial line with the axle, that is to say, it is not in the normal position, expanding the shoes. The brake lever (G) is controlled in one direction by the spring shown and in the other by the rod (F) which is under the control of the driver.

Play in the Drawbar an Essential Factor.

For the proper working of the device it is necessary to have a certain amount of play in the drawbar. This can be of the usual kind, where two helical springs act against each other. When the front vehicle is pulling the trailer, matters are as shown in Fig. 1. The spring is pulling the lever in one-direction, whilst the rod

(F) is holding the lever in such a position that the brake cannot be expanded. Should the trailer overrun the tractor, the backlash or play in the drawbar will be taken up as the rear vehicle crowds on to the leading one. This will have the effect of slackening the pullon the rod (F), which will allow the spring to assert itself and pull the brake lever (G) backwards, and so expand the shoes (B) and apply the brake. By this means the brake is applied to the trailer whenever it attempts to overrun the tractor.

In the boss (E), shown in Fig. 3, there is an arrangement which sets up a slight drag, by means of which the spider is made to incline one way or the other, according to the direction in -which the trailer is travelling. In the case of a breakaway of the trailer backwards, the spider -will assume the position shows. in Fig. 2. This will expand the shoes and apply the brake.

When backing is intentionally done, all that the driver has to do is slightly to tighten his pull on the rod (F), which will have the effect of bringing the expander te a position radial with the hub centre and will release the brake.

In the case of intentional uncoupling,

the brakes come on automatically. A pull on the rod (F) will, however, release them should the trailer be moved. It must be clearly understood ,that in this brake the order of thingOis reversed, the spring puts the brake en and the pull on the rod releases it, or prevents it from being applied. The device is known by the name of one of its inventors and is called "The Ashby " trailer brake. Particulars can be obtained from Mr. S. G. Ashby, Kensington Place, Page Street, Westminster, London, S.W.1.