HOW TO DIMINISH TERMINAL DELAYS. 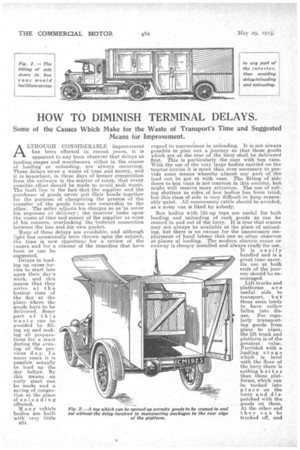 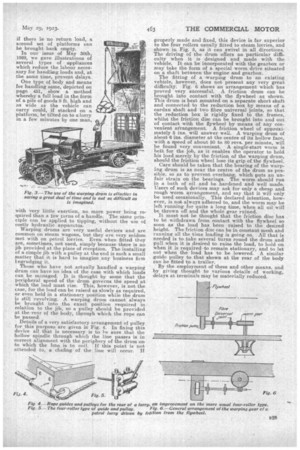 Page 10, 29th May 1923 — HOW TO DIMINISH TERMINAL DELAYS.
Close
Noticed an error?
If you've noticed an error in this article please click here to report it so we can fix it.

Some of the Causes Which Make for the Waste of Transport's Time and Suggested Means for Improvement.

LTHOUGH CONSIDERABLE improvement has been effected in recent years, it is apparent to any keen observer that delays at landing-stages and warehouses, either in the, course

of loading or unloading, are always occurring. These delays mean a waste of time and money, and it is important, in these days of keener competition from the railways in the matter of rates, that every possible effort should be made toavoid such Waste. The fault lies in the fact that the supplier and the purchaser of goods never put their heads together for the purpose of .cheapening the .process 'of the transfer of the goods from one 'ownership to the other. The seller adjusts his charges so as•to cover his expenses of delivery ; the receiver looks upon' the waste of time and money of the supplier as none of his concern, overlooking the 'indirect connection between the loss anci,his own pocket.

Many of these delays are avoidable, and although light has occasionally been thrown upon the subject, the time is now opportune for a review of the causes and for a resume of the remedies that have been or can be suggested.

Delays in loading up cause 'lorries to start late upon their day's work, and this means that they arrive at the busiest time of the day at the place where the goods have to be delivered. Some part of this waste can be avoided by filling up and making all preparations for a start during the evening of the pre vious day. n many cases it is possible actually to load up the day before. By • this means• an early start can be made and a saving of congestion at the place ofunloading effected.

Many vehicle bodies are built with very little B24

regard to convenience in unloading. It is not always possible to plan out a journey sothat those goods which are at the rear of the lorry shall be delivered first. This is particularly the case with box vans. With the use of the very large bodies carried on the tractor-lorries it is more than ever necessary to provide some means whereby almost any part of the load can be got at with ease. The fitting of side doors to box vans is not common in this country, but might well receive more attention. The use of rolling shutters as sides of box bodies has been tried, but this class of side is very difficult to keep reasonably quiet. All unnecessary rattle should be avoided, as a noisy van is liked by nobody.

Box bodies with lift-up tops are useful for both loading and unloading of such _goods as can be craned in and out of the lorry. It is true that cranes may not always be available at the place of unloading, but there is no excuse for the unnecessary employment of hand labour that one so often observes at places of loading. -The modern electric crane or runway is cheaply installed and always ready for use. It is easily handled and is a great time saver. Its use at both ends of the journey should be encouraged.

Lift trucks and platforms a r e useful aids to transport, but these seem lately to have rather fallen into disuse. For regularly transporting goods from place to place. the lift truck and platform is of the greatest value. Provided with a loading stage which is level with the floor of the lorry there is nothing better than these platforms, which can be tucked into place on the lorry and dispatched with the goods on them. At the other end they can be trucked off, and

if there is no return load, a second set of platforms can be brought back empty. In our issue of May 30th, 1922, we gave illustrations of several types of appliances which reduce the labour necessary for handling loads and, at the same time, prevent delays.

One type of body and means for handling same, depicted on page 451, show a method whereby a full load in the form of a pile of goods 8 ft. high and as wide as the vehicle can carry could, if stacked on a platform, be tilted on to a lorry in a few minutes by one man,

with very little exertion, no more power being required than a few turns of a handle. The same principle can be applied to tipping, without the use of costly hydraulic apparatus. Warping drums are very useful devices and are common on steam wagons, but they are very seldom met with on petrol lorries. Even when fitted they are, sometimes, not used, simply because there is no jib provided at the place of reception. The installing of a simple jib with a pulley at the end is such a small matter that it is hard to imagine any business firm begrudging it.

Those who have not actually handled a warping drum can have ilo idea of the ease with which loads can be managed. It is thought by some that the peripheral speed of the drum governs the speed at which the load must rise. This, however, is not the case, for the load can be raised as slowly as required, or even held in a stationary position while the drum is still revolving. A warping drum cannot alWays be brought into the exact position required in relation to the jib, so a pulley should be provided at the rear of the body, through which the rope can be passed. "

Details of a very satisfactory arrangement of pulley for this purpose are given in Fig. 4. In fixing this device all that is necessary is to be sure that the hollow spindle through which the line passes is in correct alignment with the periphery of the drum on to which the line is to coil. If this point is not attended to, a chafing of the line will occur. If

properly made and fixed, this device is far superior to the four rollers usually fitted to steam lorries,. and shown in Fig. 5, as it can swivel in all directions. The driving of the drum offers no particular difficulty when it is designed and made with the vehicle. It can be incorporated with the gearbox or may take the form of a special worm drive situated on a shaft between the engine and gearbox. The fitting of a warping drum to an existing vehicle, however, does not present any very great difficulty. Fig. 6 shows an arrangement which has proved very successful. A friction drum can be brought into contact with the flywheel as shown. This drum is best mounted on a separate short shaft and connected to the reduction box by means of a cardan shaft and two fibre universal joints, so that the reduction box is rigidly fixed to the frames, whilst the friction disc can be brought into and out of contact with the flywheel by means of any con venient afrangement. A friction wheel of approxi

mately 5 ins, will answer well. A warping drum of about 6 ins, diameter at the centre of its hollow face,

with a speed of about 50 to 80 revs, per minute, will be found very convenient. A single-start worm is bat for the job, as it enables the operator to hold his load merely by the friction of the warping drum, should the friction wheel lose its grip of the flywheel. Care should be taken that the bearing of the warping drum is as near the centre of the drum as pos sible, so as to prevent overhang, which puts an un fair strain on the bearings. The worm should run in a bath of oil and be hardened and well made.

Users of such devices may ask for only a cheap and rough worm arrangement, and say that it will only be used occasionally. This declared intention, how ever, is not always adhered to, and the worm may be left running for quite a long time, when all oil will be thrown off and the whole gear ruined. It must not be thought that the friction disc has to be withdrawn from contact with the flywheel so soon as the load has been raised to the desired height. The friction disc can be in constant mesh and running all the time loading is going on. All that is needed is to take several turns round the drum and pull when it is desired to raise the load, to hold on when it is required to remain stationary, and to let out when the load has to be lowered. A similar guide pulley to that shown at the rear of the body can be fitted to a trailer.

By the employment of these and other means, and by giving thought to various details of working, delays at terminals may be materially reduced.